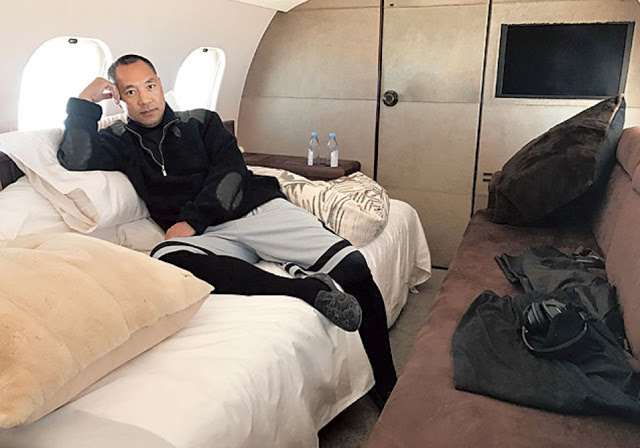 Guo Wengui (aka Miles Kwok), a Chinese billionaire with suspected ties to China’s state security apparatus who is currently living in New York, has in recent weeks been engaged in a publicity battle with Zhongnanhai. The exiled businessman has since March been releasing allegations of corruption and infighting amid top CCP leadership, claims that Beijing has responded to with counteraccusations of corruption, by successfully lobbying Interpol for a red notice, and by taking measures to ensure that the Party line on Guo is the only narrative in domestic news (measures that appear to have been unsuccessful in creating an information monopoly). For his part, Guo has been posting video updates and tweets containing further allegations of corruption, declaring that his personal safety is in jeopardy, and also regularly flaunting his wealth. While the exiled tycoon’s Facebook and Twitter accounts were temporarily suspended last month, he has recently seen his followers swell—a point he has made sure to highlight.

Guo has not yet released the evidence he claims will back up his allegations, instead wishing to “let the bullets fly for a while” before holding a “global news conference” at an as-of-yet undisclosed date. In the meantime, Guo’s concerns for his personal safety appear to be growing. This week, the billionaire released an English-language video, in which he introduced his assistant and his lawyer as contacts should something happen to him:

Guo and his team have also begun adding English subtitles to the regular “all’s well” videos he’s been releasing since April 25. Most recently, he published a subtitled version of his May 2 video addressing topics such as the official Chinese media narrative on him; relations between Beijing and Abu Dhabi; his respect for and political capital in the latter; and Interpol’s China-sanctioned red notice and his lawyers’ efforts to combat it:

Also on Twitter, Guo’s fans have begun copy-pasting a message to U.S. President Donald Trump, a man with an infamously uneasy relationship with Beijing, warning that Guo is in danger and asking for his protection:

The final tweet reads: “Please, everyone leave a message about the protection of Mr. Guo for @realDonaldTrump.” Since moving to the U.S. in 2013, Guo has become a member at Donald Trump’s Mar-a-Lago resort.

In a report for Forbes—the first report from an English-language news outlet on the man in several weeks—Nathan Vardi summarizes Guo’s situation, quoting political analysts on the magnitude of the case and outlining Guo’s recent known financial dealings and face-offs with Chinese media, business, and political personalities:

Asked about Guo, Peter Carr, a U.S. Justice Department spokesman, said: “While we do not comment on particular cases, the United States is not a safe haven for fugitives from any nation. We are an international leader in anticorruption and will continue to work with partners across the globe to advance the fight against corruption.”

[…] “There are many billionaires in China and they are capable of creating trouble for the Chinese government,” says Victor Shih, a political economy professor and China expert at the University of California, San Diego. “This episode may signal the rising political prominence of the entrepreneurial class in China.”

[…] Guo has also tried to use the New York court system to fight his battles. After arriving in the U.S., Guo hired one of the nation’s most famous lawyers, David Boies, to sue Swiss bank UBS on his behalf. […]

[…] “Most people in China believe that corruption is very widespread,” says China expert Bruce Dickson, chair of the political science department at George Washington University. “It’s unusual to have someone make these specific kind of allegations and he is a quirky guy who has videos of himself doing push-ups.” [Source]

For more on Guo, stay tuned to his Twitter (@KwokMiles), or see prior coverage via CDT, including a full-text translation of a recent Next Magazine interview detailing his allegations (sans evidence, as the outlet repeatedly points out) about Chinese security officials enforcing the law in Hong Kong, and a scheme to control the city’s future by infiltrating its real estate market with Chinese capital.