Phrase of the Week: Play a Big Game of Chess 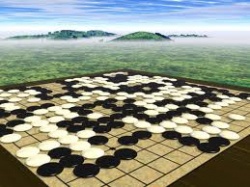 Playing a big game of chess.

A phrase used to mock the categorical justification of any government action which originated in the 2008 article “Understanding China’s Strategy: Playing a Big Game of Chess” (解读中国战略：下一盘很大的棋！).

Here, the word “chess” (qí 棋) refers generally to any chess-like game, including chess, checkers, Chinese chess, (xiàngqí 象棋 ) and go (wéiqí 围棋). The article likens U.S. international strategy to international chess, and contrasts it with Chinese strategy which it claims is more akin to go. The author contends that strategy in the Chinese game involves more cooperation between opposing players; go is more about spreading influence over a certain territory than annihilating one’s opponent. The author asserts, for example, that while Taiwan is extremely important for China to eventually reclaim, the government has adopted a go-like strategic patience towards it. The article concludes, “It would be a great blessing to the world if competition followed the manner of go and not the manner of international chess” (以围棋而不是国际象棋的方式进行竞争，才是人类的大幸). The article has been used to justify inaction or poor decisions by the Chinese government as part of some larger strategy.

The following Weibo exchange provides an example of the term’s usage:

唯美丶微小説: CCTV sent reporters into the storm to cover Hurricane Sandy. One netizen doesn’t understand: “I didn’t see them putting in that much effort to report on Ningbo!” Another netizen explains, “Actually, they’re broadcasting this for the leaders, because their kids are all over there!”

FPC-田: Playing a big game of chess, I see.