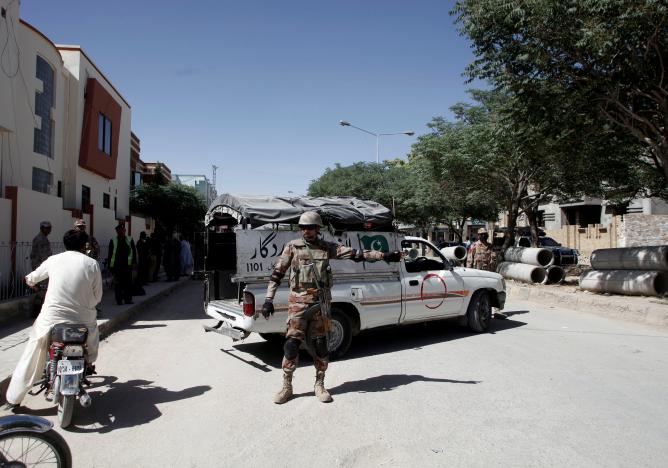 Anwar ul Haq Kakar, a Baluchistan government spokesman, said men pretending to be police officers kidnapped the Chinese teachers and wounded a passerby who tried to stop them.

“A Chinese couple has been kidnapped,” Kakar told Reuters, adding that officials had earlier mistaken the wounded passerby for a security guard.

“(The passerby) inquired why they were doing this and they said they were from a law enforcement agency, but when he asked for their identification cards, they shot him,” added Kakar.

No group has claimed responsibility for the kidnapping, but in the past Islamist militant groups have kidnapped foreigners in Pakistan to seek ransom or drum up publicity for their cause.

[…]Quetta police chief Razza Cheema said the teachers did not work on the Beijing-funded China-Pakistan Economic Corridor (CPEC) as they did not have guards. Pakistan provides security for all Chinese workers on CPEC projects in Baluchistan. [Source]

More recent coverage from the AP cites China’s Foreign Ministry to report that Chinese and Pakistani authorities are jointly working to rescue the abducted couple:

Chinese foreign ministry spokesman Lu Kang said China had asked Pakistani authorities to “take all necessary measures and do their best to rescue the kidnapped Chinese.”

Lu added that the two governments were coordinating to ensure the safety of other Chinese citizens in Pakistan. [Source]

Also at today’s regular press conference in Beijing, Lu Kang dismissed concerns expressed by the United Nations’ Economic and Social Commission for the Asia Pacific (ESCAP) over CPEC’s potential to ramp up tensions with India and fuel regional instability. At the Hindustan Times, Sutirtho Patranobis reports on the ESCAP document and China’s response to it:

The report, issued on Tuesday and prepared at the request of the Chinese government, said the CPEC could lead to “further political instability” in the region and “create geo-political tension with India” as it passes through PoK [Pakistan occupied Kashmir].

[…] He spoke in detail about the ESCAP’s positive look at the BRI.

The report had said the BRI has the potential to position the region as an epicentre for growth and trade.

[…] He conveniently side-stepped worries over the CPEC and other corridors mentioned in the report.The ESCAP report referred to political instability in Afghanistan and said this could “limit the potential benefits of transit corridors to population centres near Kabul or Kandahar, as those routes traverse southern and eastern Afghanistan where the Taliban are most active”.

The CPEC, the report said, could also “lead to widespread displacement of local communities”.

“In Balochistan, there are concerns that migrants from other regions of Pakistan will render ethnic Baloch a minority in the province…In addition, Hazaras are another minority of concern. If the benefits of the proposed (CPEC) are reaped by large conglomerates, linked to Chinese or purely Punjabi interests, the identity and culture of the local population could be further marginalised,” the report said. […] [Source]

Voice of America’s Madeeha Anwar compares concerns from military and security analysts to government optimism that CPEC will be a boon to trade and development, providing context on recent attacks and a long-running insurgency in the region:

“If Pakistan is not able to control extremism in Balochistan, how could the government achieve the desired results it is currently portraying?” asked Hasan Askari, a prominent security and military analyst.

[…] Pakistani officials are optimistic it not only will boost ties between the two traditional allies, but its backers say it will create around 2 million jobs, mostly in Balochistan.

Many security and military analysts, however, remain skeptical of the government’s portrayal of an aspiring future linked to CPEC without complete eradication of militancy in Balochistan.

Insurgents and nationalists remain actively engaged in launching attacks against “soft targets” — usually killing laborers from other provinces — and conveying a message that Balochistan is turbulent and not ready for long-term investments. […] [Source]

At The Diplomat, Fuad Shahbazov reports on mixed economic optimism and security concerns from Central Asian governments considering the implementation of CPEC:

As a landlocked but resource rich region, Central Asian countries have always looked to access regional markets, including Pakistan, China, India, and the countries of West Asia. In this regard, CPEC could serve as a strategic opportunity for Turkmenistan, Uzbekistan, Kyrgyzstan, and Tajikistan to transport their goods and market them more competitively to regional and global markets. Pakistan also desires to access the rich resources of Central Asia via Afghanistan to meet its energy needs, as well as transport goods to Central Asia.

[…] Although, CPEC promises a lot of benefits for involved countries’ future economic growth, the regional security issue remains a major concern for China and Central Asian countries. The main stumbling block in deepening multilateral relations between Central Asia, China, and Pakistan is the worsening situation in Afghanistan. The exchange of goods and energy from Central Asia to Pakistan is highly dependent on the normalization process in Afghanistan, since the shortest route for Central Asian countries to connect with Gwadar port in Pakistan would require traversing Afghan soil. Moreover, the fact that much of the infrastructure investment of CPEC is slated to run through Pakistan’s most insecure and politically fraught provinces — Khyber Pakhtunkhwa and Balochistan, where Gwadar port is located — offers more potential losses to partners from Central Asia. [Source]