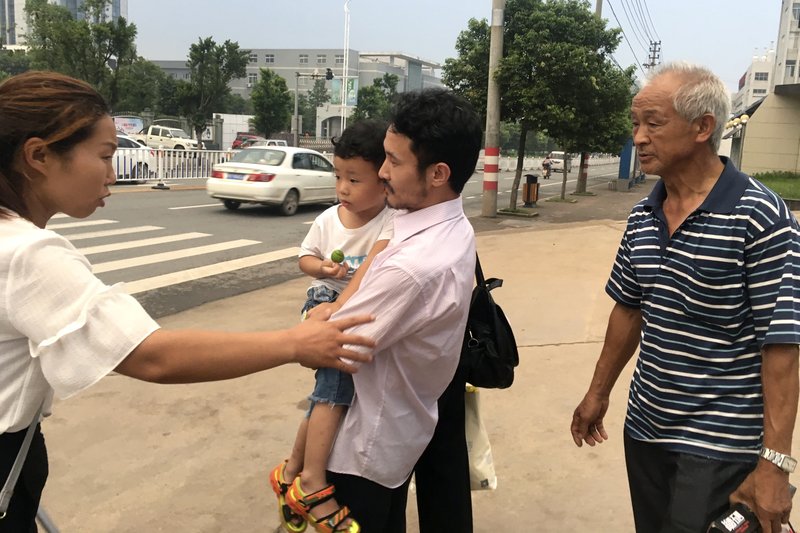 Three China Labor Watch activists who were detained while working undercover investigating abuses at two Huajian Group factories, which made shoes for Ivanka Trump’s brand, have been released on bail on Wednesday with a trial pending. Gerry Shih and Bernard Condon at AP report:

After a month behind bars, three Chinese investigators who went undercover at a factory that made Ivanka Trump shoes walked freely out of the local police station Wednesday. But they still face an uncertain future and the threat of a trial.

Chinese authorities released the three, who have been accused of breaking the law by using secret cameras and listening devices. They were freed on bail, which is extremely rare for individuals who have been detained for alleged crimes, a possible sign they won’t be formally charged and put on trial.

[…] NYU’s Cohen said he suspects the case now may follow the pattern of the one against Ai Weiwei, the dissident artist who was released on bail in 2011 and never faced trial.

“I think this is face-saving way to get rid of the case,” Cohen said. “Formally, the case will exist for another year, then it will be dropped unless these people misbehave.” [Source]

It was not clear why the three were detained given that China Labor Watch has investigated violations at Chinese factories for years without incident. It is believed that the factories’ ties to Ivanka Trump played a role in the men’s detention. From Emily Rauhala at The Washington Post:

The group’s founder, Li Qiang, told The Washington Post in May that this was the first time his investigators had been detained.

“This never happened before in my 17 years’ experience,” he said then. “The only reason we think this case is different is that this is Ivanka Trump’s factory.”

Earlier that month, the organization issued an interim report on working conditions at factories that made Ivanka Trump-branded shoes. The report alleged that people employed by Huajian Group, a company that makes shoes for Trump and others, are forced to work at least 12½ hours a day and at least six days a week at a monthly salary of about 2,500 yuan, or $365.

Li said his investigators found that workers were sometimes given only one or two days off per month. The factories offered no safety training, even though many employees come into contact with oils and glues, they reported. [Source]

Company representatives have denied labor violations uncovered by the activists, which China Labor Watch contends were among the worst that the rights organization has ever seen in nearly two decades investigating labor abuses. The firm is reportedly preparing to  outsource its China-based factory jobs to Ethiopia to save on costs. From USA Today:

Workers at the Huajian factory in Jiangxi province typically put in 15-hour days, with just two days off each month, according to a report by China Labour Watch, a group that since 2000 has investigated workplace conditions at Chinese plants that supply many of the world’s best-known companies and brands.

Workers assigned to produce shoes for Easy Spirit’s brand were forced to remain at work until 1.30 am making changes in late May after a representative of the US company complained that the manufacturing work was of “inferior quality”, the report said.

The factory’s employees were verbally and sometimes physically abused and had to wait until late April to receive payment for hours they worked in March, the report said. Additionally, the workers were paid roughly US$352 for 350 monthly work hours, below what China’s labour law stipulates, the report added.

[…T]he factory “is the worst among the dozens of factories we have investigated over the past year”, the report concluded. [Source]

Although Ivanka Trump had been called on to speak out on behalf of the activists, she has made no public statement regarding the men’s detention and release. Keith Bradsher at The New York Times report:

The Ivanka Trump brand declined to comment on their release on bail, and Ms. Trump has not commented on the investigators’ detention. She has been publicly urged to do so by the best-known Western expert on China’s criminal justice system, Jerome Cohen, a professor at New York University who has specialized in the subject for a half-century. Mr. Cohen has said that public comments from her would considerably help the legal prospects for the men and the conditions under which they were held.

But Ms. Trump did call in a speech at the State Department on Tuesday for strong action against countries where human trafficking occurs, in conjunction with the release of a United States government report that labeled China as one such country. That report particularly criticized the treatment of migrants in China, however, and not necessarily factory workers.

[…] The Ivanka Trump brand has said that the last batch of its shoes to be made by Huajian was in March. China Labor Watch contends that further batches were scheduled to be manufactured for the brand at the end of May and in June, and that its investigators had been planning to document the production of those shoes but were detained by the authorities days beforehand. [Source]

Meanwhile, Ivanka Trump and Jared Kushner have been invited to China as Beijing seeks to build closer ties with the White House. From Benjamin Haas at The Guardian:

Chinese officials have been scrambling to build closer ties with key members of the US administration after Donald Trump’s election victory surprised many in the leadership. The couple’s visit is unlikely to take place before October, as senior officials prepare for a twice a decade leadership reshuffle at a key Communist party meeting.

Ivanka Trump is broadly popular in China where state media often lavishes her and her Mandarin-learning daughter with praise.

Earlier this year a video of the two visiting the Chinese embassy in Washington for lunar new year went viral. Ivanka Trump frequently posts clips of her daughter singing in Chinese. The Global Times, a state-run tabloid, has described her as “balancing [Donald] Trump’s harsh posture”.

But the couple have been criticised for their business ties to China, shining a spotlight on potential conflicts as the two prepare to engage diplomatically with the country. [Source]