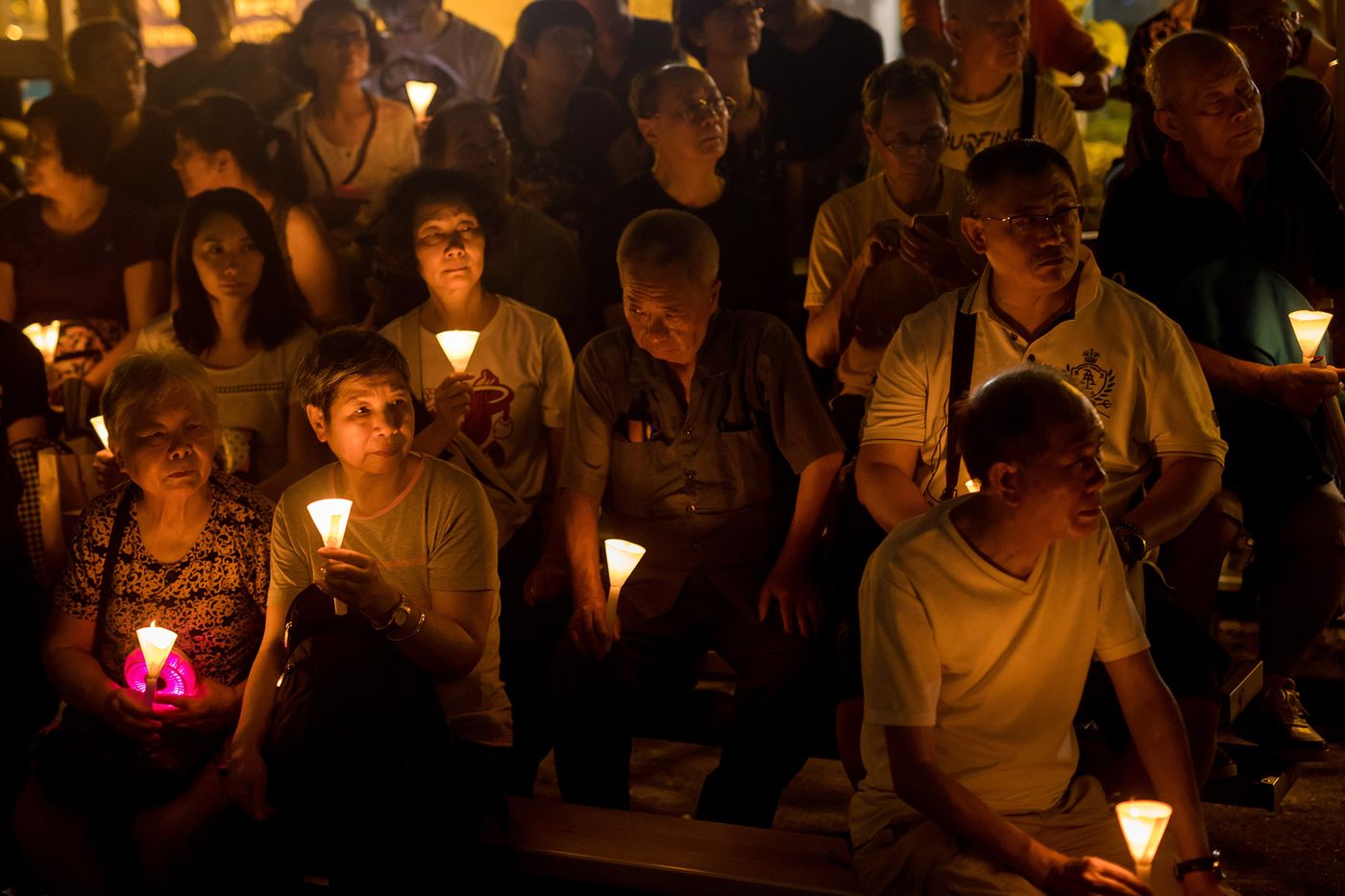 For the past 28 years, Hong Kong has held an annual vigil in Victoria Park to commemorate the lives lost in the June 4, 1989 crackdown on protesters in Beijing. Over the years, attendance has fluctuated, and this year’s turnout of up to 110,000 was lower than recent years, a fact many attribute to a growing generational divide in the territory. J.R. Wu and Katy Wong report for Reuters:

This year’s events are especially politically charged, coming just a month before an expected visit of President Xi Jinping to mark 20 years since Hong Kong was handed back to China.

[…] On a sombre night, many held aloft flickering flames, sang songs and listened to speeches calling on Beijing to fully atone for the crackdown.

“The students who died (in 1989) still haven’t got what they deserve. They fought for their future, in the same way we’re fighting for our future,” Yanny Chan, a 17-year-old high school student at the vigil, said. [Source]

This year, event organizers made an effort to boost the appeal to younger participants by inviting a popular boy band to perform and making the vigil more eco-friendly. For many younger political activists in Hong Kong, however, human rights issues in China are secondary to their own concerns about political developments in their city, where worries over Beijing’s encroaching control have led to protests and an upswell in political involvement. Kevin Lui reports for Time:

“We [separatists] are not going to deny that this is a tragedy or a case where a dictatorial regime massacres its own people,” said Chan Ho-tin, convenor of the pro-independence Hong Kong National Party. “It’s a crime against humanity, this needs no arguing.”

But for youngsters who “didn’t experience this firsthand, it’s something very distant,” he continued. “Second, we don’t think we’re Chinese. So that’s a great difference from those Hong Kong people who continue to attend the [candlelight] vigil” out of an emotional connection. [Source]

Many in Hong Kong’s younger generation don’t see themselves as Chinese, and therefore feel little personal connection to events on the mainland. The Chinese University of Hong Kong’s student union issued a statement dismissing the June 4 vigil and saying that “the focus should be on local issues first, not on June 4 which ‘carries a patriotic national spirit,'” according to a report in the Hong Kong Free Press. A Q&A in the South China Morning Post looks at the history of the vigil and the reasons some student groups are not taking part.

Despite the generational tensions, many acknowledged the role of the vigil in keeping memories of June 4 alive on Chinese soil:

Once again, Hong Kong acts as China's conscience as the only place in the nation where a large public Tiananmen memorial can be held. #june4 pic.twitter.com/erP6nA22JR

People hold candles during the vigil in Hong Kong to mark the anniversary of the 1898 crackdown on pro-democracy… https://t.co/hBcD5K2yNQ

The anniversary comes as Hong Kong is preparing to inaugurate a new chief executive, Carrie Lam, and to mark the 20th anniversary of the territory’s return to Chinese control on July 1. Recent comments by Zhang Dejiang, the highest Beijing official in charge of Hong Kong affairs, have stoked concerns about China’s more active role in governing semi-autonomous Hong Kong, which has its own mini-constitution called the Basic Law. Hong Kong Free Press reports on Zhang’s comments:

“We must formulate and elaborate on the relevant rules to fully implement the systems and mechanisms provided by the Basic Law,” the state leader said Saturday during a speech at Beijing’s Great Hall on Hong Kong’s handover.

He said the Hong Kong-China relationship is one of power delegation, not decentralisation. He said Beijing will not allow for any form of resistance against it “in the name of a high degree of autonomy.”

Zhang also said that Beijing has a duty to “supervise” Hong Kong civil servants in terms of their allegiance to the Basic Law and China.

“Whether public officers grasp the Basic Law must become a critical criterion when appointing and evaluating them. We must improve the governing team’s understanding of the country, the big picture and the rule of law,” he said. [Source]

Last November, several newly elected members of the Legislative Council were barred from taking their seats after refusing to partake of an oath pledging allegiance to Hong Kong as part of the People’s Republic of China. Following widespread street protests in Hong Kong in 2014, support for Hong Kong independence and self-governance has grown, especially among the younger generation.

Meanwhile, Taiwanese President Tsai Ing-wen, whose refusal to fully recognize the “One-China Policy” has stoked tensions with Beijing since her inauguration in May 2016, offered some words of advice to China on the anniversary of June 4.

Today is 6/4. 28 years ago in #Tiananmen, students & citizens challenged political realities in China. Their actions inspired a generation

The longest distance across the strait is democracy and freedom. As Prof. He Weifang once said: "What is history for you, is reality for us"

Taiwan can share more abt our transition to democracy. For democracy: some are early, others are late, but we will all get there in the end