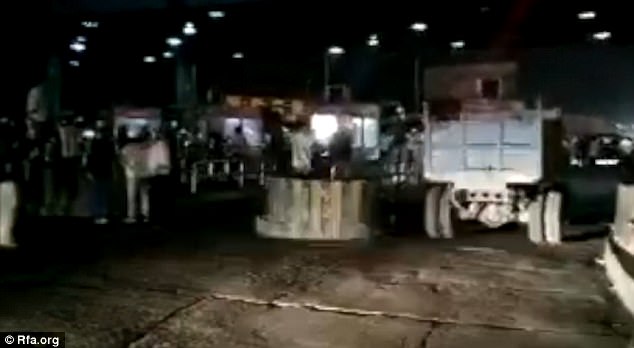 Municipal media and staff: According to the leaders’ requirements, no one is allowed to spread articles, photos, or video of the conflict at the 205 National Road East exit toll station. If found, [such posts] will be dealt with severely. Please reply upon receipt. [Chinese]

After videos circulated of an alleged riot by Hui Muslim protesters near a toll station on a highway in Tangshan, netizens responded by posting anti-Islam messages online.

The protests allegedly started after a local imam was stopped at the toll booth and got into a scuffle with the toll worker. The official Global Times reports:

Asked about the alleged brawl, a publicity department employee surnamed Zhao from the government of another district in Tangshan, Guye district, confirmed with the Global Times that “someone was beaten,” without elaborating on the details.

An online video showed that dozens of men in white skull caps gathered in front of the Kaiping district government, while several other videos depicted broken windows and computers of a tollbooth. A man could be seen throwing stone to a tollbooth in one video with background noises shouting “bravo!”

The local Public Security Bureau reportedly received over 2500 comments about the incident on its Weibo account. AP reports on the response from internet users:

The furious comments posted on the official microblog sites of a local police bureau, the Communist Youth League, and other accounts have centered on unconfirmed reports that dozens of Hui Muslims rioted at a highway toll station in the city of Tangshan after a cleric from their community was beaten or hurt in a scuffle.

Calls to police and government offices at various districts in Tangshan city, where the riot allegedly occurred, rang unanswered Tuesday or were answered by officials who said they were not in charge of responding to media requests over the incident.

[…] Chinese internet users complained on social media about having their posts about the riot scrubbed off Chinese microblogs, while internet searches of the words “Muslim Tangshan,” ”Tangshan tollbooth” and other related terms were blocked by online censors. Two women who answered the phones at restaurants near the Kaiping district government office said they had heard about the unrest but had no details.

Video clips posted on YouTube, which is outside the reach of Chinese censors, showed a group of men with white skull caps gathering at the office of the Kaiping district government and nighttime clashes between similarly dressed men and riot police. The videos could not immediately be verified. [Source]

In response to the reports, Chinese internet users directed a flood of abuse at the official social media account of the city’s public security bureau, accusing them of putting the interests of Muslims over those of the majority Han ethnic group.

“How can people ignore the law and police fail to act? What kind of place is this for Han Chinese? It is for minorities only!” one commenter wrote.

The commenters accused authorities of being overly lenient toward “violent” Muslim minorities and demanded swift punishment, in remarks that remained visible on Wednesday.

But elsewhere, searches for the term “Muslim Tangshan” and related phrases were blocked, with a message stating that the content violated community guidelines.

In recent years, as part of the the central government’s “people’s war on terror” members of the Muslim Uyghur minority in Xinjiang have been targeted for the outward expression of their religious beliefs such as by growing beards or wearing veils. At the same time, anti-Islam rhetoric has increased online. Hui Muslims, who are ethnically and linguistically similar to Han Chinese, generally experience less state interference in their religious practice than their Uyghur counterparts, who are ethnically Turkic.