Children of the Chinese Dream 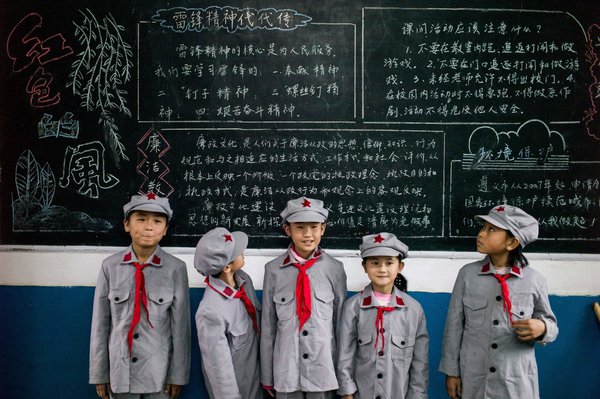 As Xi Jinping begins his second term as CCP general secretary and president of the PRC, Reuters’ John Ruwitch and Anita Li profile 10 members of the generational cohort that entered the workforce as Xi’s tenure began 5 years ago—from whose contemporaries a future generation of Party leadership will be drawn. Growing up amid an era of unprecedented economic growth, family planning policies, and the steadily reinforced state control of political discussion, members of China’s “bubble generation” tend to have an optimistic view of the future, be only children, and espouse an air of political indifference:

China’s upward trajectory is a given.

“I think the world is getting better and better,” said Qin Lijuan, 28, a personal finance consultant in Chengdu. “Even if we face an economic crisis, as long as you make safe plans your life is still worry-free.”

[…] Members of the “Class of 2012”, like many in China, project political apathy – reflecting perhaps instinctual caution on a sensitive topic in the presence of journalists, or possibly genuine insouciance.

“I don’t care about politics because my job has nothing to do with politics,” said Zheng Yue, 27, an interior designer in Chengdu. “And also I can’t solve political problems. Even if I cared a lot about it, it’s no use. I can’t change anything.”

When political issues are injected into their daily lives, as with internet censorship, they always find a workaround so they can see their favorite television shows or news stories they’re interested in. […] [Source]

Meanwhile, amid Xi Jinping’s ongoing ideological consistency drive—which has since its inception declared institutes of higher learning as a frontline for ideological work—younger generations of Chinese are experiencing nationalistic and patriotic propaganda as a staple of their public education. While much of the coverage of this has focused on China’s universities, where since 2013 professors have been forbidden from discussing topics such as universal values and press freedom, earlier learning curricula have also become increasingly political and pro-Party. Last month, the State Council ordered that “an ethical education system guided by socialist core values must be put in place in all primary and middle schools, as well as higher education institutions.” Reporting on the increased promotion of nationalism and love for the Party in national patriotic education guidelines, the New York Times Javier C. Hernandez describes the “Red Army Schools” that have come to exemplify the tenets of Xi’s ideology drive:

This fall, the Chinese Ministry of Education began rolling out new textbooks in history, language, law and ethics across primary and secondary schools. The new books include studies of 40 revolutionary heroes, writings by revolutionary leader Mao Zedong like his 1944 speech “Serve the People” and lessons on China’s territorial claims in the disputed South China Sea, a pillar of Mr. Xi’s foreign policy.

Anti-Japanese sentiment also features prominently, part of Mr. Xi’s efforts to glorify the early days of the party and its role in defending China from foreign invaders. A second-grade lesson tells the story of the “little hero” Wang Erxiao, a 13-year-old cattle herder who is said to have died in 1942 while trying to protect the offices of a Communist newspaper from Japanese soldiers.

[…] The government has set up 231 so-called Red Army schools as models for its approach. One is Ms. Xie’s Workers and Peasants Red Army Elementary School, located in Yuqing County near the site of a former Communist revolutionary base in Guizhou, a mountainous southern province.

[…] Teachers tell students that loyalty to the party can help them overcome personal difficulties and live a meaningful life. [Source]

As official policy works to maintain ideological orthodoxy among students of all ages at home, overseas Chinese students have been vocally expressing nationalism on campuses abroad. Protests against figures viewed unfavorably by Beijing have taken place in the U.S., and a critical mass of Australia-based Chinese students has been organizing against classroom content they view as politically incorrect.

Despite educational policies and news coverage suggesting a rise in youth nationalism in recent years, a study earlier this year by Harvard’s Alistair Iain Johnston claimed that nationalism has declined among Beijing youth.