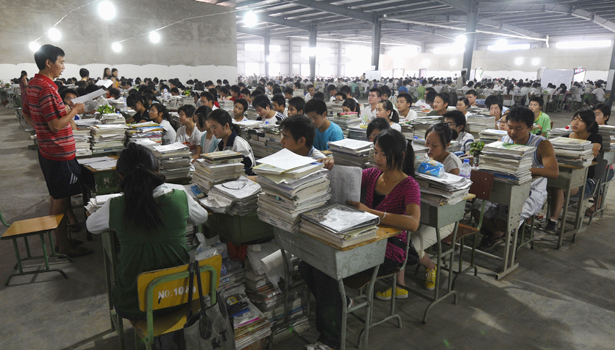 A group of top Chinese universities have established departments to oversee the “ideological and political work” of their teaching staff after the top Party disciplinary watchdog criticized them for being too lax. This comes amid Xi Jinping’s ongoing ideological consistency drive, which in 2014 established institutes of higher learning as a frontline for ideological work. At the South China Morning Post, Nectar Gan reports:

Seven [of eight top universities criticized by Central Commission for Discipline Inspection “rectification reports”] have set up a “teachers’ affairs department” under their Communist Party committees to improve “ideological and political work” among teaching staff.

[…] The inspection teams toured 29 of the best universities across mainland China, including the prestigious Peking University and Tsinghua University in Beijing, for a “political check-up” earlier this year.

[…] Some universities were criticised after the months-long inspections for their weakness in promoting ideology, while party committees were also chastised for weak leadership and failing to toe the party line.

[…] Most committees already have two departments supervising undergraduate and graduate students to monitor their ideological and political thinking.

The inclusion of teaching staff for supervision under the party committee is the latest move by the authorities to tighten ideological control on campuses. […] [Source]

In 2013, the General Office of the Party Central Committee released guidelines known as the “Seven Don’t Mentions” (七不讲), which prohibited university professors and lecturers from discussing a list of topics with students including universal values, press freedom, civic rights, historical mistakes by the Party, and an independent judiciary. In 2015, a campaign against “Western values” in universities was launched.

In a press conference Monday, the assistant minister of education, Zheng Fuzhi, said that the new textbooks will help reinforce the will of the nation and the “Core Socialist Values” — a set of 12 ideological tenets promoted in the country since 2012. Zheng is also the director of the ministry’s textbook bureau.

“The core values will be embodied in the flesh and blood of the Chinese language [subject],” Wen Rumin, the editor-in-chief of the Chinese textbooks, said at the press conference according to a report by financial news outlet Caixin. It added that the new Chinese language textbooks include dozens of articles about revolutionary heroism, such as Mao Zedong’s well-known piece “Serve the People.” Students will also learn more classic Chinese literature compared with the widely used previous book from People’s Education Press.

Two of the new history textbooks chronicle the development of the Communist Party since its formation, naming more than 40 revolutionaries. Students will also be taught that Tibet, Xinjiang, Taiwan, the Diaoyu Islands, and the South China Sea islands are historical and inseparable parts of China, The Beijing News reported. […] [Source]

As Party officials work to maintain ideological orthodoxy among students of all ages at home, the ideological conformity of overseas Chinese students has also been on display. A group of Chinese students, apparently supported by the Chinese Students and Scholars Association (CSSA), lobbied publicly for the cancellation of the Dalai Lama’s June commencement speech at the University of California San Diego. UCSD refused to rescind their invite, and the Dalai Lama spoke as some Chinese members of the student body protested. More recently, a group of Chinese students denounced a lecturer at the University of Sydney for using a map that showed part of Tibet as Indian territory amid a Sino-Indian border standoff. The lecturer issued a public apology for using an out-of-date map. At the Australian Financial Review, John Garnaut writes on the cross-border expansion of Xi Jinping’s university ideology crackdown, describing other recent examples of Chinese nationalism on display in Australian universities:

The challenge for the democratic world is that Xi’s deepening struggle against liberal values does not end at China’s borders.

To the contrary, Xi has been rebuilding and reinvigorating the old revolutionary machinery – core institutions like the United Front Work Department and its myriad platforms – to export his ideological battle to the world.

[…] A lecturer at the the Australian National University was excoriated on Chinese language social media channels for “insensitively” displaying this warning – “I will not tolerate students who cheat” – in both English and Chinese.

He was forced to issue a long apology for any implication that the offenders spoke Chinese.

[…] There can be no doubting the pressure on universities to fill classrooms with full fee-paying foreign students, generate private donations, and rise up the research rankings.

But they will need to find a way to reconcile their scholarly values and principles with the political objectives of their dominant customer. [Source]

More on the relation between Xi’s domestic ideology drive and the increasing incidents of Chinese students in Australia aggressively protesting “politically incorrect” lecturers, from Rowan Callick at The Australian:

The war being waged by Chinese international students against “politically incorrect” lecturers in Australia hasn’t emerged out of the blue. It has flowed out from China’s increasingly regimented education system.

It has come from a cohesive approach pursued over the past five years by the Chinese Communist Party authorities — which have severely audited universities to ensure their ideological orthodoxy, with a strong stress on Marxism and Xi Jinping thought.

[…] In the West and within China, students are informing authorities about professors and lecturers, especially in the social sciences and in cultural studies, who express “improper opinions” in class. […] [Source]

Last month, the Cambridge University Press reversed a widely criticized decision to accept Beijing’s demands to hide hundreds of journal articles from view in China. For more on Chinese education, academia, ideology, or nationalism, see prior coverage via CDT.