How to Promote a Sensitive Core Socialist Value 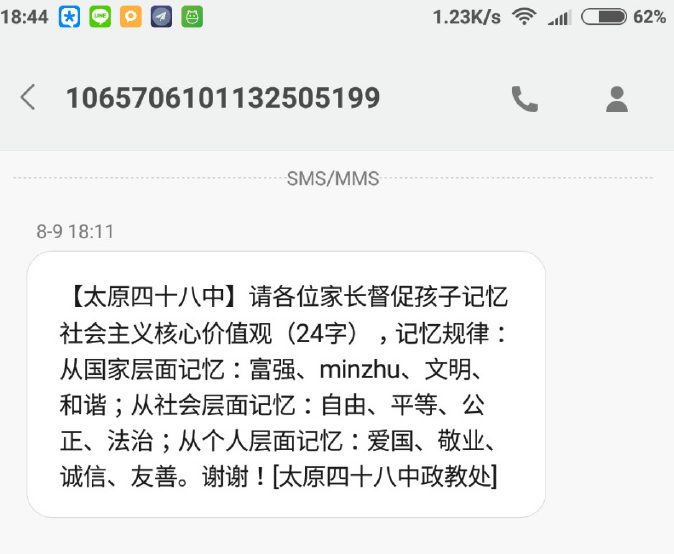 As Hu Jintao was bestowing the top Party leadership position on Xi Jinping at the 18th Party Congress five years ago, top Party officials laid out the “Core Socialist Values” (社会主义核心价值观), a new credo for interpreting Chinese socialism. The 24 characters of the new official interpretation set the stage for the ideological consistency drive that has come to characterize Xi’s rule. In the aftermath of the June 4 crackdown in 1989, Deng Xiaoping claimed the biggest failure of the reform era to be in education (meaning ideological work/indoctrination of the youth). Amid Xi’s drive, educational institutes have become the frontline for ideological work. Related efforts to promote Core Socialist Values among students have been lauded as a success: last year, a government survey in Zhejiang claimed that 97.1% of university students questioned were familiar with the values.

A recent mass text sent out to the parents of students at the Taiyuan No.47 Middle School in Shanxi, reminding them to make sure their children are heeding the creed, highlighted one particularly sensitive core value included in the official list: democracy (mínzhǔ 民主), a concept that has been both a major part of the Party’s early ideological foundation and threatening to the continuity of its power. While official media is free to use the term in their propaganda, it is sometimes sensitive on user generated media, blocked from social media searches or prevented in character input platforms on cell phones. This apparently forced the school’s political education office to use the corresponding pinyin:

[Taiyuan No.48 Middle School] We kindly request that the heads of all households supervise and urge their children to memorize the Core Socialist Values (24 characters), in accordance with regulations. On the national level remember: Prosperity, “minzhu,” civility, and harmony; On the social level: freedom, equality, justice, and the rule of law; On the individual level remember: Patriotism, dedication, integrity, and friendship. Thank you! [Taiyuan No.48 Middle School Political Education Office]  [Chinese]

After a Weibo user shared a screenshot of the text, many fellow Weibo-users responded, drawing attention to the ideological inconsistencies enshrined in the modern CCP’s interpretation of democracy. (The original Weibo post has since been deleted.)

YiZhongXunHuanMemeDa (@一种循环么么哒): It’s not strange at all, you can’t even type down the entire Constitution

XiaoyaoLongXie- (@逍遥龙邪–) : The “people” are only those “people” [representatives] in the Standing Committee of the National “People”s’ Congress, what the hell do they have to do with you fart people?

ZhaoYanZe (@赵晏泽-): Even your own words are sensitive, what a great joke of a fantastical realm China is. [Chinese]

Liberal democracy was an ideological lynchpin of early Party intellectuals and leaders, and a compilation of 1940s pro-democracy articles in Party journals was banned quickly after its release in 1999. Earlier this year controversy was stirred when a Hong Kong public education exam called attention to support for democracy among early Party leaders—including Mao Zedong. Read more about democracy, the CCP’s practice of “consultative democracy,” or about sensitive words in China, via CDT.