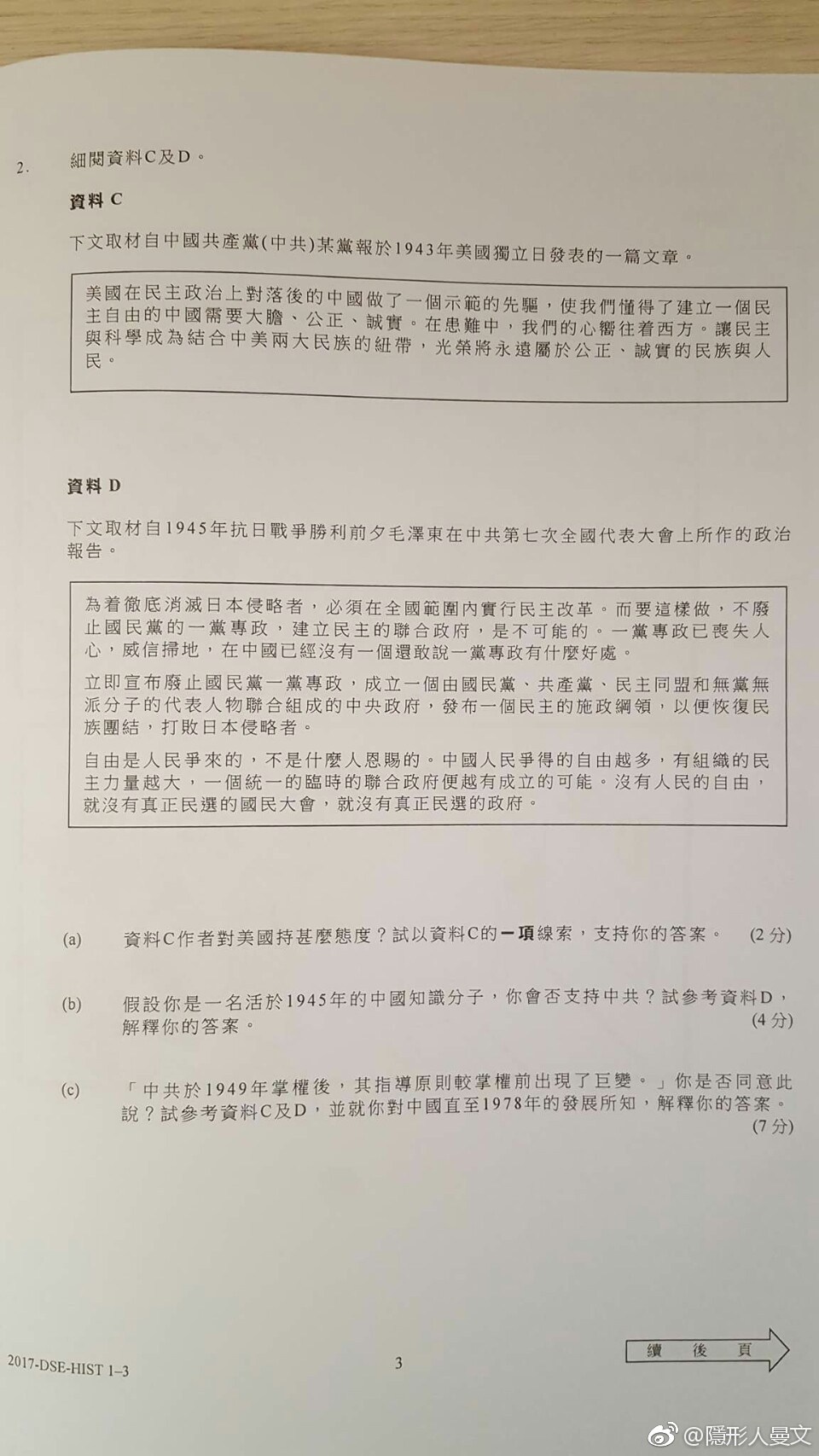 Hong Kong students this month are sitting through the ongoing and notoriously stressful Hong Kong Diploma of Secondary Education (DSE) exam, the only public exam in the region’s “3-3-4 Scheme” for public education. Last Thursday, April 20, as the history sections of the exam were being administered, the Hong Kong Free Press reported on included questions requiring students to comment on early Chinese Communist Party (CCP) leaders’ praise of democracy and criticism of one-party rule, and the sharp ideological change that the Party took after it came to power. Kris Cheng reported:

The CCP question, which was the second question on the exam, supplied students with material from two sources. The first was an article published by a CCP newspaper on July 4, 1943, US Independence Day.

“The US has made an example to the underdeveloped China in democratic politics; as we learn to build a democratic and free China, we need to be bold, fair, honest,” it read. “Let democracy and science be the bond between the Chinese and American nations.”

The second was an excerpt from Mao Zedong’s speech at the seventh national congress of the CCP in 1945, near the end of the Second World War. […] [Source]

The controversial questions came amid heightened tensions between Beijing and Hong Kong concerning democracy in the semi-autonomous region. Last month saw the the 2017 election for Hong Kong’s chief executive, which was won by the Beijing-friendly Carrie Lam late last month. Years before the election, Beijing’s insistence on vetting candidates led to months of widespread street protests in Hong Kong, which did little to sway Beijing’s stance on oversight. Despite Beijing’s lack of compromise, calls for greater democratic autonomy resounded: in last year’s Legislative Council elections, several pro-democracy candidates won seats—some of whom were then barred from taking those seats after they refused to pledge support for Hong Kong’s unification with the mainland. China’s National People’s Congress then issued a rare interpretation of the Hong Kong Basic Law which made allegiance to Hong Kong as part of China a prerequisite for officeholders.

The exam questions on the CCP’s early line on democracy in the 2017 history exam were shared widely on Facebook. One Hong Kong-based user shared images of the questions on Weibo, noting a Facebook friend’s comment on the audacity of the test writers. CDT has translated the comment, along with the exam content:

The following text was taken from an article about the United States’ Independence Day published in 1943 by a Communist Party (CCP) newspaper:

With its democratic political system, the U.S. is a pioneer, setting an example for lagging China, and helping us understand that establishing a democratic and free China requires boldness, justice, and honesty. Amid crisis, we turn our gaze to the West. May democracy and science be the tie that binds the two great nations of China and the U.S. together. Glory will forever belong to the nations and people who are just and honest.

The following text was taken from a political report made by Mao Zedong in 1945 to the CCP 7th National Congress on the eve of victory in the War of Resistance against Japan:

To thoroughly eradicate the Japanese aggressors, we must implement democratic reforms on a national level. But if we attempt to do this without abolishing the one-party rule of the Kuomintang, establishing a democratic, unified government will not be possible. One-party rule has lost the faith of the people and its credibility, and now no one in China dares to claim that there are any benefits to one-party rule.

Freedom is fought for by the people, it is not bestowed upon them by someone. The more the Chinese people fight for freedom, the greater their organized democratic power becomes, and the greater the possibility for establishing a united, provisional coalition government. Without the people’s freedom, there is no true democratic election of the National Assembly, and no true democratic election of the government.

(a) What is the attitude of the author of Passage C toward the U.S.? Try to use clues from Passage C to support your answer. (2 points)

(b) Imagine you are an intellectual living in China in 1945. Would you support the CCP? Try to reference Passage D when explaining your answer. (4 points)

(c) “After the CCP came into power in 1949, its guiding principles underwent an enormous change compared to before.” Do you agree with this statement? Try to reference Passages C and D, as well as your knowledge of China’s development up until 1978, to explain your answer. (7 points) [Source] Passages C was also included in the 1999 collection “Harbinger of History: Past Promises of the Chinese Communist Party,” edited by Xiao Shu. The book, which was quickly banned in China, compiled pro-democracy and liberal-minded commentary published by CCP leaders in the 1940s.

The exam’s first questions (based on passage A and B, attached below) also highlighted the concerns of Hong Kong citizens in the 80s over the future of their region ahead of the 1997 return of sovereignty to Beijing. The first question noted a 1982 survey in which only 4 percent of respondents expressed support for the handover, and asked test takers to analyze pre-handover concerns. The next question referred to lyrics from Sam Hui’s 1990 Cantopop song “All in the Same Boat” (同舟共濟) (in which the artist pleaded with Hong Kongers not to move to foreign countries), then asked examinees to refer to the song in analyzing whether the 1982 concerns continued in 1990. The lyrics in the passage B translate to:

Be determined to remain on this ship

Plight or challenge, we dauntlessly confront

The ship we command will never be toppled

Hong Kong is my heart, my faith will never end

My faith must remain, its foundation steady

If I strive and do my part, we can break through the darkness