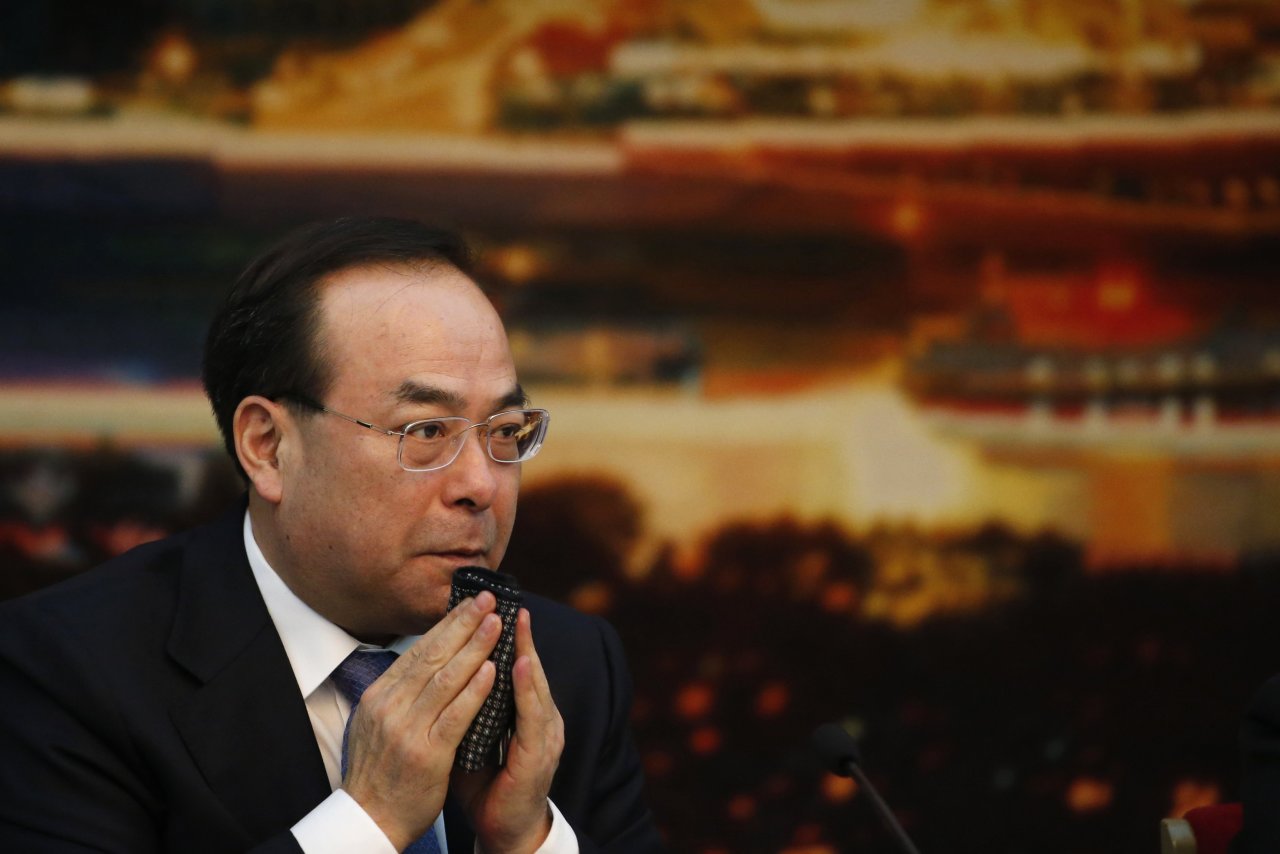 During a panel session at the 19th Party Congress on Thursday, China’s securities commission chairman Liu Shiyu named former Chongqing party chief Sun Zhengcai as part of a toppled clique of high-ranking party officials who schemed to seize power from President Xi Jinping. Sun, once a rising politician and a top candidate for a place on the Politburo Standing Committee, was abruptly removed from office this summer for “serious discipline violations.” He was subsequently expelled from the party and handed over to judicial authorities for further investigation at the end of last month. Wendy Wu and Choi Chi-yuk at South China Morning Post report:

“[Xi] addressed the cases of Bo Xilai, Zhou Yongkang, Ling Jihua, Xu Caihou, Guo Boxiong and Sun Zhengcai. They had high positions and great power in the party, but they were hugely corrupt and plotted to usurp the party’s leadership and seize state power,” Liu said, becoming the first senior official to accuse Sun of trying to take over the party.

[…] Liu said Xi had taken great effort over the past five years to tackle corruption, which “seriously endangered the party’s ruling foundation and ability to govern”.

“Xi Jinping, with the historical responsibility as a proletarian revolutionist … cleared up huge risks for the party and the country,” he said.

“The central leadership of the party with General Secretary Xi Jinping as the core saved the party, saved the military and saved the country over the past five years … He saved socialism.” [Source]

The charges hurled against Sun signal an unusual shift in tone as the accusations imply that the fallen politician not only violated party discipline but also harbored personal ambitions to undermine President Xi’s authority. From Austin Ramzy at The New York Times:

Mr. Sun had previously been accused of “grave violations of discipline,” a vague phrase that can include corruption or disloyalty to the party. But the accusation that he had plotted a political overthrow represents a personalization of the allegations: Rather than attempting to undermine the party, he is accused of transgressions against China’s leader, Xi Jinping.

[…] Defining their crimes as offenses not just against the law and the Communist Party but an attempt to oust Mr. Xi himself is a noteworthy shift, analysts say. And making such a statement during the party congress sends a clear message to officials.

“Anyone challenging Xi Jinping can now be seen as committing a political crime,” said Nicholas Bequelin, East Asia regional director for Amnesty International. “I think that is very different from what everybody understood before — that yes, if you were resisting, opposing or going through bureaucratic strategies to get around new directions you could be taken down by a number of accusations, including corruption or a serious breach of discipline, but not accused of something that is far more serious, which is a political plot.” [Source]

Sun was named the party boss of Chongqing in 2012 to help clean up after then Party Chief Bo Xilai who was dismissed and later sentenced to life in prison on charges of bribery, embezzlement, and abuse of power. Sun’s successor Chen Min’er, a close associate of President Xi, pledged on Thursday to faithfully toe the party line and promote Xi’s vision. Zhang Yunbi at China Daily reports:

“We should unswervingly keep in line with the CPC Central Committee, with Xi Jinping as its core, in regard to thoughts, ideology and actions,” Chen said.

To remain in line, it is very important to “thoroughly study and smartly use” the new era thought, Chen said in his address during the discussion among the Chongqing delegation, which was opened to the media during the National Congress.

Chen also called for “down-to-the-earth efforts” to boost the prosperity of Chongqing and to reinforce benefits to the public wellbeing in order to translate the new era thought into reality. He said efforts should be made to make local residents feel a stronger sense of gain, happier and safer.

When answering a media question, Chen also pledged efforts to “wipe out the pernicious influence” brought by Sun Zhengcai and Bo Xilai, both former Party chiefs of the CPC Chongqing Municipal Committee, as well as Wang Lijun, former police chief and vice-mayor. [Source]

The accusations made against Sun have further shattered the semblance of unity that Xi has sought to portray to the outside world and revealed the ongoing power struggle taking place within the party. From BBC:

More than one million officials have been jailed or arrested in the corruption crackdown which began shortly after Mr Xi took power in 2012.

The depth of the crackdown has led many to speculate that some arrests were politically motivated and that part of Mr Xi’s overall strategy was to consolidate power.

Mr Xi had previously denied claims there was a “power struggle” within the party.

But the comments appear to corroborate what has long been suspected – that there are intense power struggles going on behind the party’s image of unity, says the BBC’s Michael Bristow. [Source]