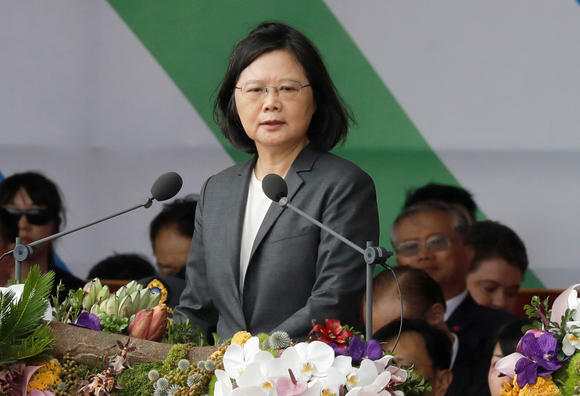 Delivering a speech on October 10, Taiwan’s National Day, President Tsai Ing-wen pledged to defend the island’s democracy despite increasing pressure from Beijing, while also assuring Taiwan that her government is working to better diplomatic relations with China. Cross-strait tensions have been especially high since Tsai and her Democratic Progressive Party (DPP) won landslide electoral victories in January 2016. Tsai has refused to fully recognize the “1992 Consensus” and related “one China” principle, to which Beijing has responded by suspending informal cross-strait diplomatic channels, lobbied for Taipei to be excluded at high-profile international policy events, and praised the severing of ties between other governments and Taipei (a trend it has encouraged with generous foreign investments). Tensions were further stoked late last month when Taiwan’s new premier William Lai Ching-te made pro-independence remarks in his first administrative report to parliament. Reuters’ Fabian Hamacher reports on President Tsai’s address:

Tsai, who has pledged to maintain peace with China, said her government was still seeking breakthroughs in ties with Beijing and promised consistent and stable policies.

“We need to remember democracy and freedom were rights obtained through all of Taiwan people’s countless efforts,” Tsai said.

“Therefore, we need to use all our power to defend Taiwan’s democratic and freedom values and lifestyle,” she said.

[…] “We have offered our greatest goodwill,” she said in her 20-minute address.

“I have repeatedly said, our goodwill doesn’t change, our promises don’t change; we won’t walk on the old path of confrontation, but we won’t bow to pressure,” Tsai said.

At the South China Morning Post, Lawrence Cheng reports on President Tsai’s comments on the island nation’s defense amid the mounting tensions, and quotes a DPP legislator on the relative conciliatory tone that she adopted in her speech:

On the island’s defence, Tsai said Taiwan needed a new generation military with a focus on quality, not quantity that was well prepared for growing threats in cybersecurity and espionage. She added that it also needed to build up its defence industry, including locally developed jets and submarines.

But she stressed that Taiwan was not seeking conflict. “We remain committed to maintaining peace and stability both in the Taiwan Strait and across the region,” she said.

[…] DPP legislator Kuan Bi-ling noted the conciliatory tone in Tsai’s speech ahead of the party congress, at which President Xi Jinping is expected to consolidate his grip on power.

But Liu Guoshen, director of the Taiwan Research Institute at Xiamen University, in the mainland’s eastern Fujian province, said Tsai did not offer anything new in her speech and it was unlikely to be perceived as conciliatory by Beijing. [Source]

“As we face new circumstances in cross-strait and regional relations, leaders from both sides should together work to display the political wisdom that has carried us through over the years,” Tsai said during her remarks on national day. “We should search for new modes of cross-strait interactions with determination and patience. This will lay a more solid basis for long-term peace and stability in the cross-strait relationship.”

The Taiwanese leader adopted a soft approach in appealing to Chinese officials to work with the island.

[…] Tsai’s remarks before the CCP’s national congress are unlikely to change Beijing’s stance, said Chang Wu-ueh, an associate professor at the Graduate Institute of China Studies at Taipei-based Tamkang University.

“The president is seeking stability with her remarks, but Beijing is unlikely to warm to her remarks,” Chang said. “Even if both sides are seeking a new mode of interactions, that will have to wait till after the party congress.”

Still, Chang said tensions between the two sides are unlikely to escalate after the CCP’s conclave. [Source]

Wu also notes that in the speech, “Taiwan” was used 48 times, while “Republic of China”—Taiwan’s official name which is often used in official addresses to highlight connection with the PRC—was used six. Meanwhile, amid the National Day celebrations, several pro-independence groups staged protests against celebrating a national holiday under the name of the Republic of China.