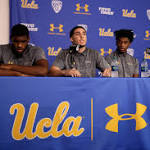 Websites must not hype the news about the theft in Hangzhou by UCLA basketball players. (November 16, 2017) [Chinese]

LiAngelo Ball, Cody Riley and Jalen Hill, players on the UCLA men’s basketball team, were detained and then released on bail in Hangzhou after allegedly shoplifting designer sunglasses from a Louis Vuitton store there. President Trump personally asked President Xi for their release while he was in China, and the three players returned to Los Angeles on Tuesday. Charges against them in China have been dropped. Upon their return, Trump took to Twitter to reprimand them for not thanking him and Xi. At a later press conference, the three apologized for their actions and thanked Trump. They have all been suspended indefinitely from the UCLA basketball team.

Some legal experts noted that less high-profile detainees in China have not received the same attention, including American football player Wendell Brown who has spent 14 months in prison in Chongqing for his alleged participation in a bar brawl, which his family denies. There is no indication that Trump raised the case of Chinese political prisoners and dissidents, including Liu Xia, wife of late Nobel laureate Liu Xiaobo, who has been under tight surveillance since her husband’s death in July, and only briefly seen in a video that appeared online. James T. Areddy reports for The Wall Street Journal on how the Chinese government tried to downplay the basketball players’ case in the official media and the political machinations behind the decision to release them:

China’s state-controlled media had written little about the UCLA players, and some articles that appeared online later were removed, a possible indication authorities found the topic sensitive or were leaving themselves more room to handle the case discreetly.

China legal experts had doubted the athletes would see the cells of Zhejiang No. 6 Prison that normally houses foreign nationals jailed by Hangzhou authorities.

The decision of whether to prosecute a crime becomes more complicated when foreigners are involved, say lawyers. Throw in celebrity athletes and comments from a U.S. president, they say, and any decisions get especially weighty.

“Nobody wants to make a decision because everyone’s watching,” said Fu Hualing, associate dean at the University of Hong Kong’s law school. [Source]

?Prevention of case interference by officials is a priority in China's legal reforms. I'm sure any requested meddling by @realDonaldTrump in UCLA players case will be handled in accordance with law out of respect for China's sovereignty. https://t.co/XKFHbzwW4n

Thanks @jamestareddy for pointing out that other American citizens detained in China have not received the same attention as the UCLA players. The bigger story is the staggering numbers of Chinese citizens who have been deprived due process of law in their own country. https://t.co/nAZn4fezOy