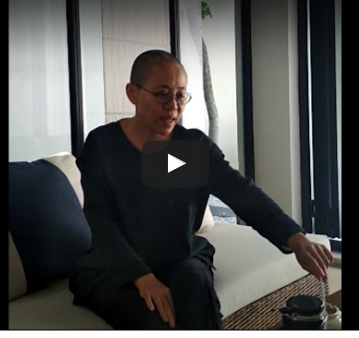 Liu Xia, the widow of recently deceased activist Liu Xiaobo, has been under house arrest and surveillance since her husband won a Nobel Peace Prize while serving his 11-year prison sentence in 2010. Liu Xia was last seen in state media pictures from Liu Xiaobo’s funeral last month, leading to concerns that she was still being held in authorities’ custody despite never having been officially charged with a crime. Her U.S.-based attorney has since filed a formal complaint to the U.N. condemning Beijing for her “enforced disappearance” amid a chorus of calls for her unrestrained freedom from supporters, human rights organizations, close friends, and foreign diplomats.

On August 18, Liu Xia appeared in an online video posted to YouTube—a platform long blocked in China—marking the first time she had been seen in 34 days. Reuters’ Brenda Goh and Christian Shepherd report:

In a roughly one minute-long video posted on YouTube on Friday, Liu Xia speaks directly to the camera while holding a lit cigarette. She was sitting on a white sofa in front of a pot of tea in what appeared to be the living room of a home.

“I am outside recuperating, everyone please grant me time to mourn, time for my heart to heal and one day I will be able to face you all in a healthy state,” she said. It was not immediately clear what she meant by “outside”.

“The doctors tried their best when Xiaobo was ill and Xiaobo also viewed life and death very plainly. So I must recalibrate, and in future when I have made improvements in different aspects, I can be with you all again.”

Reuters was not able to verify whether she made the comments of her own free will or her location. [Source]

The video, embedded below, was posted by YouTube user “goudan li,” an account that since launching last month has shared videos representing Beijing’s point of view in an ongoing PR battle with fugitive billionaire Guo Wengui, who has irked China by unleashing a wave of allegations of corruption against Chinese political leaders, business, and media personalities.

The New York Times’ Chris Buckley reports on doubts from friends that the words spoken by Liu Xia in the video were uttered on her own accord:

No one has claimed credit for the video.

But it first appeared on a YouTube channel that has issued only videos echoing Chinese government views. Several of Ms. Liu’s friends said it seemed to have been made by the security police keeping her in unofficial custody, in an effort to repel calls from rights groups and foreign politicians who have called for her to be freed, and allowed to go abroad if she wants.

[…] Ms. Liu’s statement appeared made for viewers abroad: YouTube is blocked in China, and news of her and her husband is heavily censored here.

“I think this video of Liu Xia was made by the authorities,” said Hu Jia, a human-rights activist in Beijing who was friends with her and her husband. “We have no way of determining where she is and who is with her.” [Source]

The BBC further quotes activist and Liu-family friend Hu Jia on his doubts:

It is not clear who made the recording or where it was set, leading to speculation that it may have been made under duress.

Hu Jia, a fellow activist in Beijing, believes Liu Xia was forced to record the video.

He told BBC Chinese: “Liu Xia smokes endlessly when she’s stressed and you can see in the video that she kept holding a cigarette.

“You can sense her helplessness, her frustration that the authorities have her life firmly gripped in their hands.”

Chinese officials say that Liu Xia is a free Chinese citizen and is simply grieving in private. [Source]

Coverage from the South China Morning Post quotes Hu Jia voicing suspicion that the video was uploaded on direction from authorities in effort to assuage calls for her freedom from abroad: “The video wants to show Liu Xia is unwilling to contact the outside world. We don’t think it is true.”

In commentary published at China Change last month in honor of Liu Xiaobo, imprisoned activist Wu Gan (who stood trial for subversion last week) drew attention to opaquely-sourced videos attempting to portray prisoners and detainees enjoying “happy” lives. He highlighted videos of Liu Xiaobo’s cancer treatment that included a figure purported to be the Nobel Peace laureate enjoying a round of badminton with a guard, and recalled guards filming his own reunion with fresh air on their cell phones after he’d long been kept in his cell.

In May, police released a video showing detained rights activist Jiang Tianyong apparently unharmed following allegations that he had been tortured. Jiang’s trial for subversion is expected to begin this week in Changsha, Hunan.

Amid a trend of likely coerced video confessions of activists and lawyers detained in the 2015 “Black Friday” crackdown, some this year began to preemptively disavow any potential statements later attributed to them.