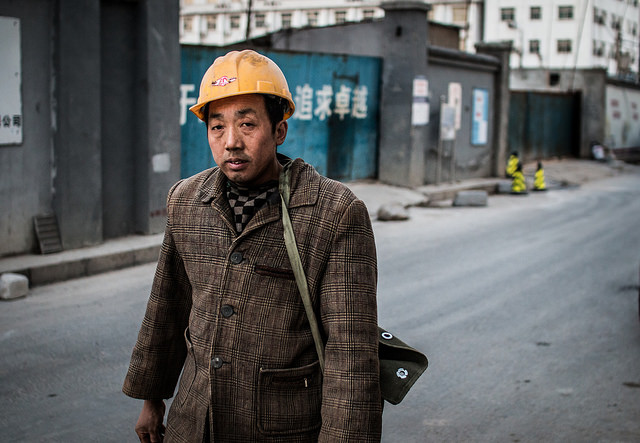 Following a deadly fire on November 18, authorities initiated a crackdown on unsafe dwellings that led to the eviction of tens of thousands of migrant workers in Beijing. Netizens angrily recalled official usage of the term “low-end population” to refer to the workers disproportionately affected by the crackdown, seeing in the campaign an excuse to expedite plans to drive the marginalized workers out of the city. Censors have taken efforts to control the media narrative on the fire and on the evictions, and to moderate social media commentary on the issue. Despite the censorship, public anger has been high in the capital and online. Last week, CDT translated four young migrant workers’ recitation of a Yu Xiuhua poem in rejection of the “low-end population label.”

Sunday’s protest was not reported in China’s Communist party controlled press but videos and photographs of the event spread online, with human rights campaigners cheering the scenes.

[…] Footage showed crowds processing through the community, which is just north of the motorway leading to Beijing’s international airport and close to the 798 art district, itself the target of violent demolitions in the past. One group carried a white banner emblazoned with the phrase: “Baoli qugan qinfan renquan” – forced evictions violate human rights.

Eli Friedman, a Cornell University academic who studies China’s labour movement, said the protest – which coincided with the international human rights day – appeared to be the first since Beijing’s recent crackdown began. The demonstration suggested Beijing may have miscalculated how much outrage would be caused by the “ferocity” of its campaign, which has seen once vibrant migrant communities reduced to rubble.

Friedman, the author of a recent article about the evictions called Evicting the Underclass, predicted authorities would now move swiftly to ensure that the protest was nipped in the bud. […] [Source]

SupChina has shared a cellphone video of the demonstration on YouTube:

The "low population" is hitting back. In more than one locality in Beijing where mass expulsion is ordered, people are out on street voicing their anger, incidentally on Human Rights Day. https://t.co/kUG7dNVG2m

At the South China Morning Post, Viola Zhou and Zhuang Pinghui report that Feijia is one Beijing neighborhood in which many residents have been affected by the crackdown, and notes that another neighborhood near the site of the November 18 fire has reportedly also seen protests:

A resident surnamed Wang who runs a shop with his wife in Feijia, said the protest started on the village’s main street at 9am. All those without Beijing residents’ permits, including the couple, had been told to vacate their homes, he said.

The village government issued a notice on November 26 saying that the power and water supplies to all temporary structures would be switched off on December 15, and that all businesses and residential tenants must leave before that date.

[…] A similar rally was reported to have taken place in the Nanxiaojie area of Daxing on Sunday morning, though details of the incident were difficult to verify. A woman working in the area said there had been a protest, but declined to give any details. [Source]

At TIME, Joseph Hincks recalls another protest in Beijing this year over a policy that affected migrants in the city, and quotes professor Willy Lam on the justification of the Feijia protesters’ grievances:

Although public demonstrations are rare on the mainland, this is not the first time Beijingers have taken to the streets over what they say are unreasonable evictions. In June this year more than 100 shopkeepers protested the closure of parts of a popular market near the Bejing Zoo.

[…] Willy Lam, a professor at the Chinese University of Hong Kong’s center for China studies, tells TIME that in recent years China has become more effective at putting down protests.

“What’s unique about the Bejing case is that it’s a particularly egregious human rights violation, plus the number of people involved,” Lam said of the tens of thousands of mid-winter evictees, who mostly work in low-skilled jobs such as construction and domestic care.

“They have provided services for Beijing residents,” Lam added, “and they rightfully have a sense of entitlement because many of them have been in Beijing for more than 10 years, so the anger is commensurate with this sense of injustice.” [Source]

Coverage from The Wall Street Journal’s Andrew Browne situates the rising public outcry over the migrant crackdown into the context of Xi Jinping’s own recent acknowledgment that the unequal enjoyment of China’s development could lead to massive social unrest:

It is, he told a Communist Party gathering in October, the conflict between people’s desire for a better life and “unbalanced and inadequate development.” In a commentary, Xinhua News Agency explained that if such a “principal contradiction” is left unresolved, “it can lead to chaos and eventually, as Marx predicted, to revolution.”

[…] If this [the migrant crackdown] is how Mr. Xi intends to resolve the contradictions that cloud China’s future, expect trouble ahead.

[…]China’s invincible rise is a myth. The contradictions have grown big enough to threaten the party’s rule. A deep cleavage between privileged urban dwellers and the rural poor who serve them could limit the country’s economic prospects for decades to come. Half the country pursues Mr. Xi’s “China Dream” of wealth and power; the other half—the ones still picking their way through Beijing’s blitzed slums—could derail it. […] [Source]

Earlier this month, ChinaChange published an essay by social movement researcher Dr. Wu Qiang on how the crackdown and other policies that marginalize China’s urban migrant population, alongside official efforts to disarm civil society and legitimate advocacy, are redefining class struggle and risk creating a “dangerous class” in China:

The difference between the current actions and the “arrest and control” of public intellectuals, dissidents, and NGO workers during the 2011 “Jasmine Revolution” in Beijing, is that [Beijing Party Secretary] Cai Qi’s target this time is a massive group of people. These are the “new displaced class,” the main target of expulsion in Daxing District and now in virtually all districts of Beijing. This group includes clothing manufacturers, small factory owners, home renovation laborers, others in the service industry, individual business owners, Taobao store owners, and other small business enterprises and self-employed workers. They — along with the construction workers now holed up under tents on work sites, as well as the contract and lease workers (派遣工) now sleeping in factories — all constitute a massive, growing group, a new displaced class. Their common characteristic is the lack of a stable and long-term employment relationship. They also lack social security or real estate. Compared to the mainstream class in society, they live on the margins of China’s urban environment. Ten years ago, the main representative of this group was the “migrant worker” (农民工), but with the rapid growth of urbanization and movements of people — in particular the relentless expansion of temporary employment relationships, the collapse of the social security system and the shrinking rights of city residents — this group continues to grow. They have now spread to the so-called low-skilled computer programming (码农) and traditional industrial workers.

[…] By identifying the undesirable class of floating proletarian migrants and analyzing the Beijing government’s policy to “cleanse and reduce the low-end population,” we are bringing the state of this “non-citizenship” to the attention of the public and the international community. In Beijing and the rest of the country, this new and growing class of floating migrants who are “long-term temporary workers” is quietly altering China’s social class structure and urban landscape. They lack basic civil rights and the right of free movement into cities. Their unstable labor relations — that is, the obstacles caused by the backwardness of Chinese labor conditions and social security net — inform their unstable lifestyle that in itself poses a challenge to the urban space. Matters of household registration (户籍) aside, it is possible that this group of people will be used as an excuse for future discrimination and stratification by the state. This kind of stratification no longer entails the classic distinction between the modes of education and residence that once formed the gulf between proletariat and bourgeoisie.

[…] More Beijing refugees will likely be produced as a result of internal colonialism. At the same time, this new displaced class, in the course of repeated expulsions, could in theory find their self-consciousness and engage in independent societal grouping—becoming a genuinely “dangerous class.” [Source]

At The New York Times, Chris Buckley, Sui-Lee Wee, and Adam Wu note that while low-skilled laborers have been disproportionately affected by the crackdown, white-collar workers from elsewhere in China attempting to make a living in Beijing have also been impacted. (An earlier CDT post on the crackdown also noted that more affluent Beijing residents have been caught up in the crackdown.)

Beijing is a cultural, technological and commercial capital as well as a political one, and the tenements on its outskirts are home to tens of thousands of hopeful young college graduates who have moved here seeking better jobs and better lives.

These job seekers are treated as migrants in their own capital, because China’s biggest cities are fortresses of official privilege, especially Beijing. The government gives residents with permanent residence permits, called hukou, more generous access to housing, schools and health care. But migrants must pay more for many services, and many live on the edges of Beijing, where rents are lower.

[…]“Even if the industry I’m in is very high-level, as far as the government is concerned, I’m also a peasant worker, a migrant worker,” said Zhang Xingwang, 24, who studied automation in college and came to Beijing from Hebei Province seeking work as a software programmer.

He had to find new housing after his old apartment near where the deadly fire broke out last month was demolished. “I thought Beijing would be relatively fair and tolerant, and the government would behave better,” he said. “But after this happened …” [Source]

See also Cornell University’s Eli Friedman’s Jacobin article “Evicting the Underclass,” in which he outlines other recent municipal efforts to improve the “quality” of the urban population by pushing migrants away; the SCMP’s coverage late last month of property tycoon Ren Zhiqiang’s criticism of the household registration or hukou system and the migrant eviction campaign; and a ChinaFile conversation on the crackdown.