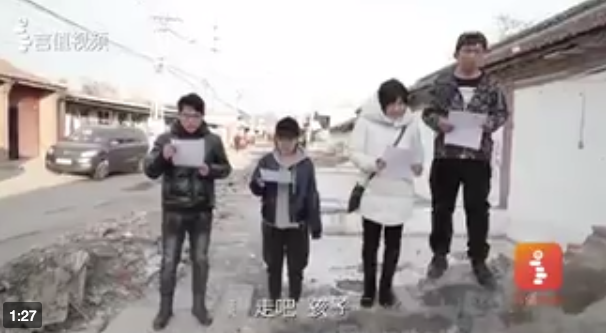 After a deadly fire in Beijing on November 18, authorities launched a crackdown on unsafe dwellings that led to the eviction of tens of thousands of migrant workers in the capital city. Netizens angrily recalled official usage of the term “low-end population” to refer to the workers disproportionately affected by the crackdown, seeing in the campaign an excuse to expedite population control plans to drive the marginalized workers out of the city. Despite repeated censorship directives and social media controls amid the public opinion crisis, sympathy for the affected migrants remains high, with some web-users taking to overseas social media to voice their concern and show their support for the many thousands of homeless laborers.

Twitter user @alicedreamss shared a clip from the television talk show “Laborers Poems and Songs” (劳动者的诗与歌), in which several young migrant workers affected by the crackdown recite a poem by Yu Xiuhua rejecting the “low-end” label. Yu Xiuhua is one of China’s most widely-read poets, sometimes referred to as China’s Emily Dickinson. CDT has translated @alicdreamss tweet and Yu Xiuhua’s poem below:

Driven out of their homes, young migrant workers in Beijing are on the street. As they face Beijing’s rustling cold winds, they declare: We are not the ‘low-end population!’

I am Xiaohai from “Laborers Poems and Songs.”

All of us have suffered disturbances related to the big fire—relocation, eviction, and now we don’t know where we can go. Every time a major accident like this occurs we watch them issue a previously planned statement, and it stands in stark contrast to our workmates as they are moving, poverty-stricken, panicked, helpless, wearing numb expressions.

I think that we’ve been surviving silently in a collapsible space for too long, we need to let out our real voices, when all is said and done where is it we can go? Actually where things are really happening is not in offices, not in conference rooms, but in the crowds, in the cold winds, on the streets.

Next my friends and I will together recite a poem by teacher Yu Xiuhua:

“Go! Child, Beijing’s Cold Winds Are Behind You”

Go! Child, Beijing’s Cold Winds Are Behind You

Set aside the sunshine until tomorrow; Set it aside for the high-end people to sing

Set aside happiness until tomorrow; Set it aside for the high-end people to enjoy

Set aside hope until tomorrow; set it aside for the wishes of the high-end people

Also leave behind despair; this left despair will also be high-end despair

We have no road to follow; but we’re in the domain of the motherland

Our unlined garments are frail; but we’re in the domain of the motherland

We have nothing at all; We have only a motherland

This motherland is also yours

Child you must believe me

We may live low; but we are not low-end

You don’t attend a noble school; this is not low-end

Even if your clothes are shabby; you are not low-end

Read more about the fallout from the November 18 Daxing fire in Beijing and the “low-end population,” via CDT. See also a recent profile of poet Yu Xiuhua from The New York Times’ Kiki Zhao.