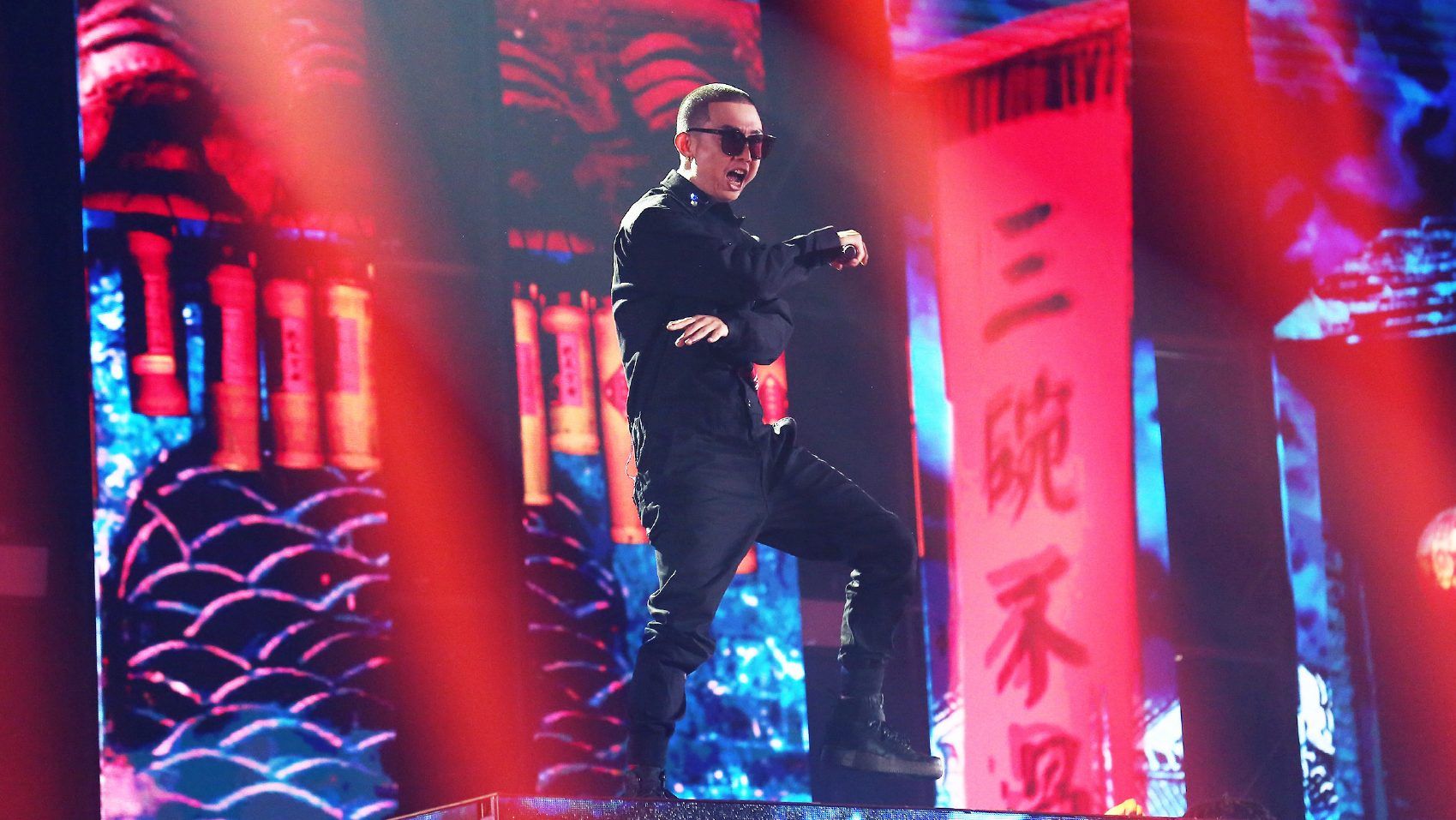 On Friday social media began circulating a government order apparently issued to Chinese broadcasters banning them from giving air time to “artists with tattoos, hip hop music” and other performers who are “in conflict with the party’s core values and morals”.

Popular portal Sina.com said the directive was announced by Gao Changli, a top official with the  government agency that oversees the media.

No new regulations have yet been made public.

But a rapper known as GAI, who has nearly four million followers on China’s Twitter-like Weibo platform, was suddenly absent from Friday’s airing of the popular reality show “Singer”.

GAI is now no longer featured as one of the contestants, prompting online speculation that he was a casualty of the new rules.

“This is a sign that hip hop will be banned,” said one of many comments on Weibo. […] [Source]

While an underground hip-hop scene has flourished in China over the past decade, rap music last year was given popular exposure on the hit reality television show “Rap of China”  (中国有嘻哈), which also featured the artist GAI as a winning star. At the Australian Broadcasting Corporation, Bill Birtles reports on the popularization of hip-hop in China, and on its uncertain future:

While US hip hop has long been popular among some young people in China, the homegrown variant has until recently remained a niche subculture.

But the popularity of the online program China Has Hip Hop in which PG One and GAI emerged last year thrust the genre into mainstream popularity.

State media opinion writers have stressed that the traditional anti-authoritarian themes that emerged from American MCs rapping about racial discrimination, drug use and gang violence are not suitable for China.

[…] President Xi Jinping stressed the need to “perfect the systemic management of culture” during a major speech in Beijing late last year.

[…] For young hip hop fans like Beijing resident Cai Malong, the campaign against rap does not bode well. […] [Source]

At Reuters, Pei Li and Adam Jourdan note that Rap of China star PG One was also recently chastised for his language, and puts the new crackdown into the context of the CCP’s constant efforts to control pop-cultural trends and dissent:

The crackdown on hip-hop, still very much a new genre in China, reflects a broader squeeze on popular culture as the country’s stability-focused leadership looks to rein in potential platforms for youthful dissent.

Beijing is eager to use popular culture to shape public opinion, including co-opting rap artists ahead of its five-yearly congress last year. With state support comes the insistence that Party values must take center stage in the artists’ work.

The latest cleanup started when PG One was forced to apologize for lewd lyrics, which critics said were insulting to women and encouraged the use of recreational drugs.

[…] The campaign underscores a broader clean-up of cultural content from video games, online streaming and even performance art amid a drive to make cultural products adhere to mainstream socialist core values. [Source]

BBC News reports more details on the order sent to broadcasters last week, cites the removal of another rapper from a popular television program, and notes more social media reactions to the crackdown:

A memo surfaced last week after a meeting of the state authority which oversees press and television and has almost total control over what can appear on air. The memo said programmes could no longer feature any hip-hop content or artists.

[…] Another TV show, Happy Camp, suddenly removed VAVA – the most popular female rapper who rose to fame from The Rap of China – from their latest episode. […] [Source]

More on the official circular, believed to have been issued by the State Administration of Press, Publication, Radio, Film and Television, and on divided reactions to it, from Jiayung Fan at SupChina:

[…] Public opinion (in Chinese) appears divided in response to the news. “I firmly oppose tattooed artists on television. I don’t have any issues with someone’s personal preference, but they shouldn’t be on TV shows to have a bad impact on the young generation,” one internet user wrote. However, some people found the new rules ill-advised and ridiculous. One person commented, “Having tattoos means no class? Chinese culture is horrible.” [Source]

Quartz’s Zheping Huang reports that the apparent crackdown had been foreshadowed with the earlier banning of individual rap songs, noting that some Chinese rappers—including GAI—had began to clean-up their lyrics and adapt their themes to those more favored by the CCP:

Chinese authorities yanked individual rap songs in years past for promoting violence or using obscenities. But they now appear to be taking it to a new level by banning entire artist catalogs. That’s having a chilling effect on top rappers, who seem to be cleaning up their lyrics in response—one tweaked “bitch is trouble” to “beach is trouble,” according to Chinese media reports (link in Chinese).

[…] Gai is an unlikely victim of the clean-up campaign—some argue he’s collateral damage. A Chongqing native, he is best known for borrowing lines from Chinese classic literature, and rapping about everyday struggles in the local dialect. After rising to fame, he stopped performing his gangster rap songs and even freestyled “Long Live Our Motherland” in a show on China’s national broadcaster. Fans jokingly called him “Socialist Gai.”

[…] One of the most straightforward “socialist” songs comes from Rap of China contestant Sun Bayi. While he typically sings about things like Lamborghinis and champagne, his latest single, “Brilliant China,” is basically a roundup of party doctrine. The song opens, “Everyone knows the Chinese Communist Party’s mission is to seek happiness for the people and to seek great rejuvenation for the nation.” [Source]

Shortly after PG One’s downfall, rapper Sun Bayi released a music video called Magnificent China on Weibo. The song opens with the lyrics, “We all know the original aspiration and mission of the Communist Party of China (CPC), they work endlessly for people’s happiness and for national rejuvenation.”

Even though the song had been in the works after the 19th CPC National Congress, Sun told the Global Times that he was criticized by some for “sucking up to government,” which he found ridiculous, because he was merely reciting passages from the congress report, he said.

Sun believes that one of the core values of hip-hop is “keeping it real.” “If American rappers want to talk about oppression in their society, they have every right … But I’ve never personally experienced oppression, instead I want to focus on the opportunities and advantages I’ve experienced living in China,” he said.

“I don’t care about labels. I see something, I write something. There’s nothing wrong with that,” he said. He paused, then added, “Even if it is propaganda for my country, so what?” […] [Source]

The nationalistic state-affiliated tabloid also published an op-ed earlier this month on the incompatibility of hip-hop and Chinese culture, which concludes: “No one can transplant a cactus to Siberia or move polar bears to the equator. In this case, the living environment matters. Without a native culture for hip-hop, the cultural form can scarcely blossom in China.”