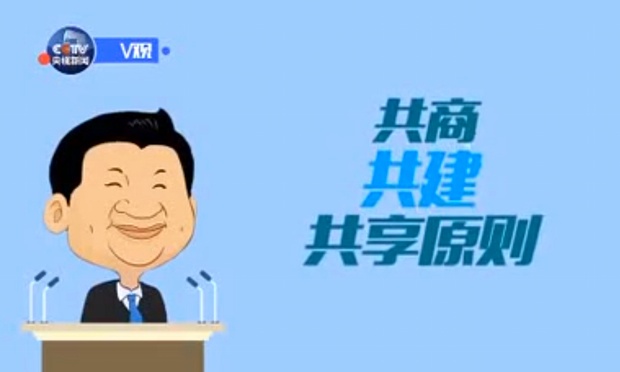 The track’s title, The Reform Group is Two Years Old, is definitively not ghetto-fabulous. But it makes up for that with celebrity power: samples of Xi Jinping’s speeches are sprinkled throughout the recording.

[…] The rap, which is performed by a hitherto unknown musician called Wu Wenduo, is at its catchiest when pondering Xi’s much-hyped attempts to vanquish corruption and smog.

[…] Xi Jinping’s hip-hop debut is the latest attempt to use contemporary music to promote a more modern face to the party, which was founded in 1921 and has ruled China since 1949. […] [Source]

The rap video follows the October release of a psychedelic English-language music video publicizing China’s thirteenth five-year plan made by Xinhua, and becomes the latest piece of an ongoing presidential image-crafting campaign helped along by traditional media, mobile application, the “positive energy” of adoring fans, and an upcoming TV miniseries.

Follow along with a full transcription and English-translation from The Wall Street Journal.

The CCP under Xi Jinping has updated its approach to guiding public opinion. In 2014, state-owned Shanghai United Media Group launched The Paper (Pengpai 澎湃), a hip, web-2.0 style newsblog. State propagandists’ willingness to adapt to the modern media landscape sometimes draws inspiration from content of an earlier era, as exemplified by the recent release of a 3D film version of “The White Haired Girl,” a revolutionary opera said to have been one of Mao’s favorites.