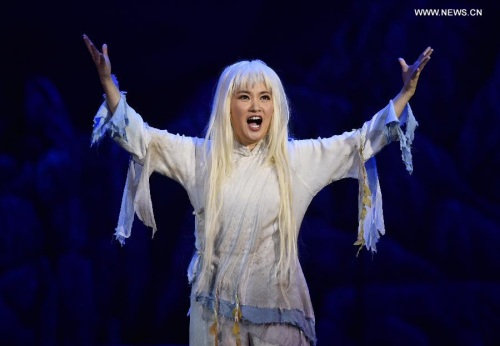 Addressing the Beijing Forum on Literature and Art in October of 2014, President Xi Jinping laid out his vision for the model creative worker in contemporary China: promote patriotism and Party ideology by creating art with “positive energy.” His address recalled language used by Mao Zedong at the Yan’an Forum on Literature and Art, which in 1942 set Party policy on using the arts to serve politics. Now, “The White Haired Girl,” a revolutionary opera once among Mao’s favorites, has been resurrected and modernized into a 3D film, and state media is supplying rave reviews. The Guardian’s Tom Phillips reports:

The film’s boxing day premiere marks the latest chapter in an attempt by the president, Xi Jinping, to stamp his mark on the Chinese arts.

[…]A  culture ministry official told state media that the phenomenon was directly linked to “the artistic development plan of the party, the future of China’s art and who art should really serve”.

Xinhua said: “The 3D opera embodies the spirit of remarks by Xi Jinping … on socialist literature and art, emphasising the people-oriented concept in the production of artistic works.”

Underscoring the president’s ties to the project, China’s first lady, the soprano Peng Liyuan , “took time off her busy schedule to look over the play and provided valuable advice for its modification”, Xinhua added.

Her husband’s blueprint for the arts has sent shivers down the spines of many artists and writers, who fear the determination to focus only on the positive and the patriotic spells doom for their trade. […] [Source]

The opera has also been staged for over 30,000 audiences in cities throughout China for its 70th anniversary this year. Xi’s October 2014 speech was edited and published by state media this year. For historical context of the speech and analysis of its implications on the film industry, see prior coverage via CDT.