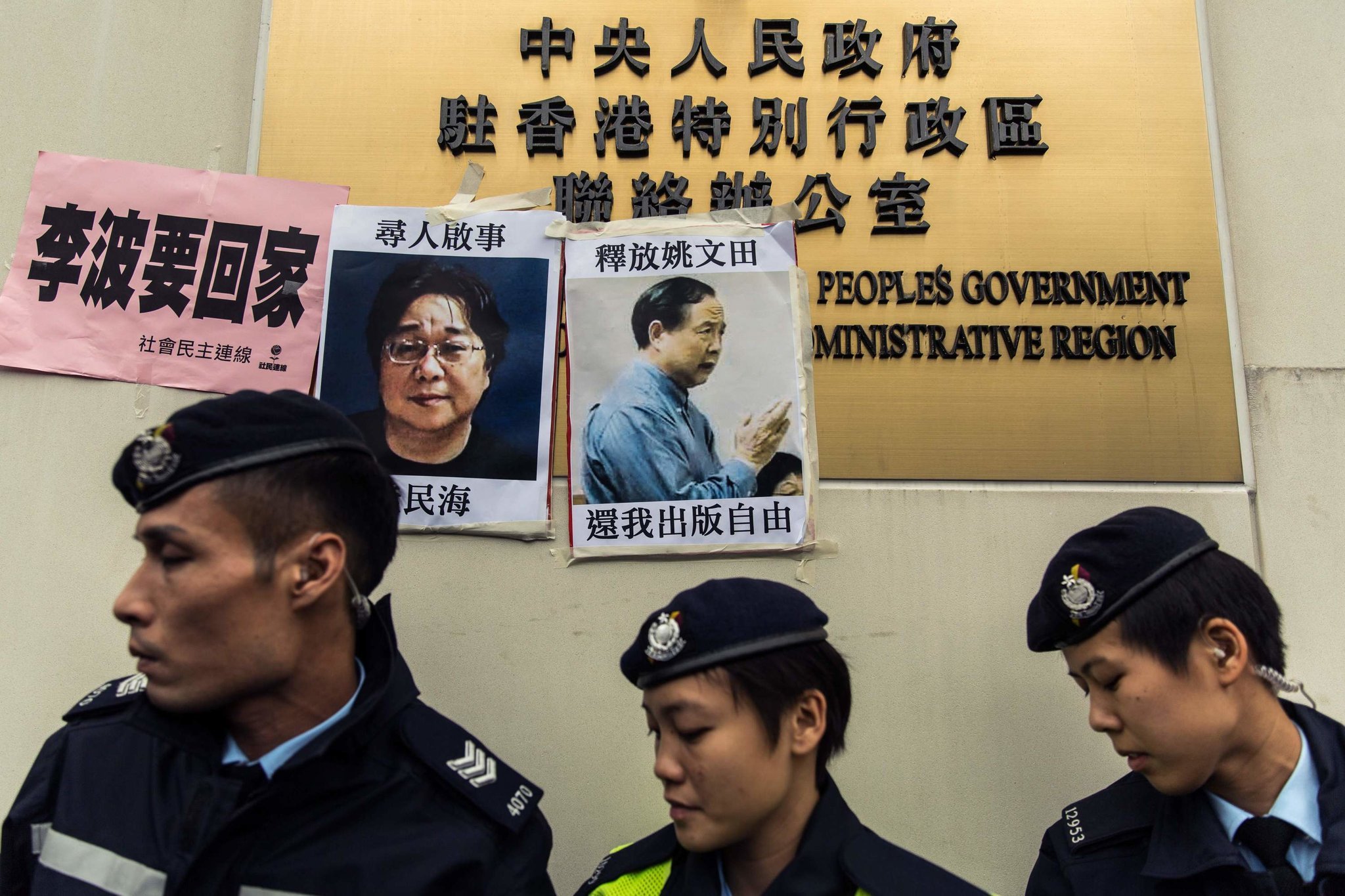 The Swedish government has summoned the Chinese ambassador after reports that publisher Gui Minhai has been taken into custody again, this time while travelling from Ningbo with Swedish diplomats to seek medical treatment in Beijing for a neurological ailment. Mr. Gui, a Swedish citizen, was one of five Hong Kong-based publishers who were abducted by mainland authorities and taken to China in late 2015. Their bookstore Causeway Bay Books, and its affiliated Mighty Current publishing house, specialized in banned political gossip critical of ruling Communist Party elites. Mr. Gui vanished from his vacation home in Pattaya, Thailand before resurfacing months later in detention in mainland China without legal assistance or consular access. He was released last October after serving two years in prison for an alleged decade-old traffic violation, for which he was forced to confess to on state television. Catherine Lai at Hong Kong Free Press reports:

Foreign Minister Margot Wallström told Swedish news agency TT that she has summoned China’s ambassador for more information, but declined to comment further “out of consideration” for Gui.

A spokesperson at the Swedish Foreign Ministry confirmed to Swedish Radio News that Gui Minhai had been detained. He added that the ministry was taking the matter very seriously. “We have taken strong measures on a high political level,” he said.

The New York Times reported that Chinese officials told Swedish diplomats that he was suspected of sharing secret information with them and of meeting them illegally.

The Chinese Ministry of Foreign Affairs said that it “had no understanding of the situation you referred to” when contacted by the newspaper.

“We expect the immediate release of our citizen and that he will be able to meet with diplomatic and medical staff,” Sweden’s Foreign Ministry said in a statement.

“Chinese authorities have repeatedly assured us that Gui Minhai is a free man since being released after having served a sentence for a traffic-related crime, and that we can have any contact we wish with our citizen.” [Source]

The State Department also issued a statement that the U.S. government is “deeply concerned” by Gui’s detention.

China’s Foreign Ministry insisted that it had no information on Gui Minhai, while hinting that the two Swedish diplomats accompanying Gui may have broken Chinese law. From Chris Buckley and Christina Anderson at The New York Times:

“This is not a matter that falls under the purview of the Ministry of Foreign Affairs,” a spokeswoman for the ministry, Hua Chunying, told reporters at a regular news briefing in Beijing when asked about Mr. Gui’s seizure from the train. “I don’t understand this specific matter.”

[…] The Chinese Foreign Ministry’s public reticence about Mr. Gui “probably indicates that the national security apparatus is calling the shots, and the foreign ministry may be out of the decision-making loop,” William Nee, a China researcher for Amnesty International, said by email.

[…] At the Chinese Foreign Ministry briefing, the spokeswoman, Ms. Hua, declined to give details about discussions between Swedish and Chinese diplomats. She told reporters to direct their questions about Mr. Gui to another Chinese ministry, while declining to specify which one.

“Any foreigner in China, including the personnel of foreign embassies and consulates, cannot violate international and Chinese law,” Ms. Hua said. When pressed about whether Swedish diplomats were suspected of breaking laws, Ms. Hua said she was just laying out general principles. [Source]

Transcript of the news briefing was subsequently altered:

If memory serves there were at least eight. All gone. https://t.co/v5GTy6mw4R

Still a bit shy of the 14 out of 18 removed after Melissa Chan’s expulsion https://t.co/NO87cjy8O2

At The Guardian, Tom Phillips looks at how China has grown increasingly bold and unconcerned with international criticism of its actions.

In an editorial entitled “Is there anything China won’t get away with?”, Sweden’s Borås Tidning newspaper said it was time to stand up to a bullying Beijing […].

It said: “This is a new China that we see; a China which, with its ever-growing tentacles, wants to build a huge port in Lysekil [in Sweden] … which builds nuclear power plants in the UK, which wants to build an Arctic highway from Norway to Moscow … a China that is not afraid of the diplomatic repercussions that may arise from grabbing a Swedish book publisher in front of the employees of Margot Wallström.”

Diplomats and observers say that under Xi Jinping Beijing has become increasingly deaf to foreign criticism, wagering cash-hungry governments will not challenge its actions.

“There is really a new, harsher tone in their approach. It wasn’t like this a few years ago,” said one western diplomat who declined to be named.

“I think they’ve become over-confident and are overplaying their hand,” the diplomat added. “And there is an increasing pushback from all over the world.” [Source]

Swedish author and journalist Jojje Olsson has called on the international community to “ignore China’s economic muscle” and hold its leaders accountable for the seizure of Gui.

Gui’s ordeal is a stark reminder that a foreign passport provides limited protection for Chinese-born foreign nationals detained in China. From Eva Dou at The Wall Street Journal:

[…] Mr. Gui’s case sends a message to other ethnic-Chinese foreign nationals that legal provisions such as protection from your country’s diplomats can’t be taken as a given, some rights activists said.

[…] “In national-security cases, the trend unfortunately appears to be that the security authorities give less weight to foreign passports held by ethnic-Chinese foreigners,” said James Zimmerman, a lawyer with Sheppard Mullin in Beijing and former chairman of the American Chamber of Commerce in China. [Source]

At CNN, Michael Caster writes that Gui’s enforced disappearance in China is just the tip of the iceberg, whereby the abduction of foreign citizens by Chinese security agents has become increasingly systematic and widespread over the years.

As I argue in “The People’s Republic of the Disappeared,” since 2013 China has taken steps to systematize and formalize a previously extrajudicial system of enforced disappearances, hiding them behind the veneer of law.

[…] Under international law there are no exceptions that permit for enforced disappearances, and yet this is exactly what China has attempted to legislate.

Under RSDL, if police claim national security exceptions, they may hold the suspect, without notifying anyone, in a secret location for up to six months, denied access to a lawyer or family members. The police may even refuse oversight by the state prosecutor. [Source]