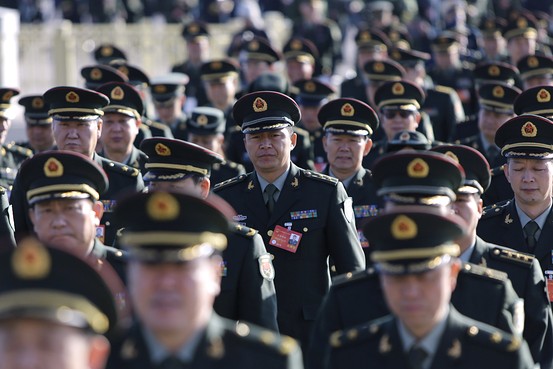 At Reuters, Christian Shepherd and Michael Martina report that China’s defense budget will increase by 8.1% for 2018, according to a report issued at the opening of the annual meeting of the National People’s Congress in Beijing. The announcement, like several previous moves towards military modernization in recent years, has raised concerns about China’s global increasingly assertive global ambitions:

The 2018 defense budget will be 1.11 trillion yuan ($175 billion), according to a report issued at the opening of China’s annual meeting of parliament.

The defense spending figure is closely watched around the world for clues to China’s strategic intentions as it develops new military capabilities, including stealth fighters, aircraft carriers and anti-satellite missiles.

“Faced with profound changes in the national security environment” the absolute leadership of the military by the ruling Communist Party must be observed, and the unity between the government and the military, and the people and the military, must always be“strong as stone”, he said.

[…] China’s military build-up has rattled the nerves of its neighbors, particularly because of its increasingly assertive stance in territorial disputes in the East and South China Seas and over Taiwan, a self-ruled territory Beijing claims as its own.

“We would like to see China be more transparent about its defense policy, including spending and the direction of its military power,” Japan’s Chief Cabinet Secretary, Yoshihide Suga, told a regular briefing. [Source]

Vice Foreign Minister Zhang Yesui, a spokesman for the National People’s Congress, said at a briefing Sunday that China’s defense spending was proportionate to the size of its economy and budget. The country’s military outlays were equal to about 1.9 percent of gross domestic product in 2016, according to Sipri, compared with about 3.3 percent for the U.S.

[…] “China is committed to a path of peaceful development and China pursues a defense policy that is defensive in nature,” Zhang said. “China’s development will not pose a threat to other countries.”

[…]“China is continuing its sustained effort to increase the funding for the PLA — and a good part of that increase will go into efforts to improve China’s nuclear forces and projection capabilities,” said Tim Huxley, executive director of the International Institute for Strategic Studies-Asia in Singapore. “We are seeing consistent long-term Chinese investment in the development of military technology, which will increasingly rival or better those of the U.S. and Western countries.” [Source]

At The Washington Post, Simon Denyer reports more foreign concerns about the aims of China’s military modernization plans, as well as more reassurances from Chinese military officials and experts:

In its National Defense Strategy issued at the end of last year, the Pentagon accused China — and Russia — of being “revisionist powers” that want to shape the world in accordance with their authoritarian models of government, and as posing the central challenge to U.S. prosperity and security. It also accused China of seeking “Indo-Pacific regional hegemony,” of intimidating its neighbors while militarizing the disputed waters of the South China Sea, and of wanting to establish global pre-eminence at the expense of the United States in the longer term.

[…] Song Xiaojun, a Beijing-based military commentator, said the spending increase was partly to compensate for personnel laid off as part of a recent reduction in the armed forces by 300,000 troops, while Maj. Gen. Luo Yuan, vice president of the China Strategic Culture Promotion Association, said the budget was normal for maintaining the army, not a preparation for war.

[…]“China has not had any wars in the past 30 years,” he said. “It’s building its military to ensure its own safety, so foreign powers don’t need to worry.”

Ni Lexiong, a military expert from Shanghai University of Political Science and Law, said the increase was modest in the face of rising costs, tensions on the Korean Peninsula and a border standoff with India. “Considering such a situation, this symbolic increase is equal to no increase,” Ni said. [Source]

The 8.1% increase appears not to reflect all planned Chinese military expenditures for 2018. At CNN, Brad Lendon reports on the military-related costs normally include in national expenditure budgets that China’s leaves out:

According to the independent Stockholm International Peace Research Institute (SIPRI) report on comparative military spending released last year, the US leads in total dollars spent, about three times that of China, and nine times that of Russia in third.

But although China’s defense spending is less than other major countries, the figures released do not include numerous military-related costs typically included in the budgets of other nations.

The CSIS China Power project, which monitors China’s military expenditure, said outlays not covered may include government subsidies for military production, funds for strategic and nuclear forces, and paramilitary organizations, suggesting that China’s real budget is far greater than the official figures reveal.

The reform and modernization of the armed forces has been a top priority during Xi Jinping’s first term. Beijing recently announced a significant acceleration of plans towards that goal, shortening the deadline for a third stage of the modernization of the People’s Liberation Army from 2049 to 2035. If recently announced amendments nixing the current two-term presidential term limit are approved by the NPC as expected, Xi looks likely to remain in charge through most if not all of the remaining interval.

Last month, state media announced that a newly developed stealth fighter jet was operational, but military sources later revealed a a flaw suggesting it may have been rushed into service. China last April launched its second aircraft carrier—their first domestically constructed carrier after commissioning the Liaoning, a former Soviet carrier, in 2012—and last June unveiled an advanced new naval warship. Last July, China began deploying troops to its first overseas military base in Djibouti, and long-running speculation that China is seeking to establish a base in Pakistan continues.

Meanwhile, Reuters’ Christian Shepherd reports on a separate announcement from Premier Li at the NPC, warning Taiwan that separatist “schemes or activities” won’t be tolerated:

Premier Li Keqiang issued the warning in a speech at the opening of the annual session of China’s parliament, his stern words coming amid mounting Chinese anger over a U.S. bill that seeks to raise official contacts between Washington and Taipei. [See prior coverage via CDT]

[…] In his address to the largely rubber-stamp assembly, Li said China would promote the peaceful growth of relations across the Taiwan Strait and “advance China’s peaceful reunification”.

“We will remain firm in safeguarding China’s sovereignty and territorial integrity and will never tolerate any separatist schemes or activities for Taiwan independence,” Li said, to applause from the 3,000-odd legislators at the Great Hall of the People. […] [Source]