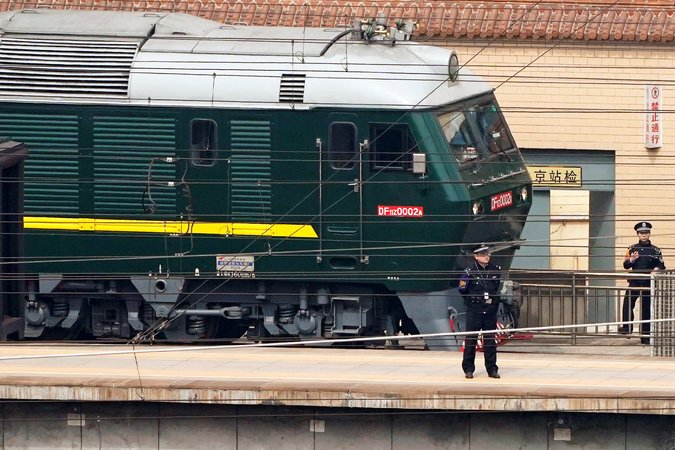 North Korean leader Kim Jong Un met with China’s Xi Jinping in Beijing this week in his first public overseas trip and meeting with a foreign head of state since he inherited power in 2011, ahead of anticipated talks with his South Korean and American counterparts. Xi reportedly accepted Kim’s invitation to visit Pyongyang in the future. News of the meeting broke only after Kim’s departure, following days of rumors sparked by the appearance in Beijing of a distinctive train resembling those used for international travel by his predecessors. The political sensitivity of relations with North Korea has made the topic a frequent focus of Chinese censors: CDT has previously published a string of leaked censorship directives related to North Korean leaders, nuclear tests, and more, and has noted intermittent social media blocks for the irreverent nickname "Kim Fatty III" (or “Kim Three Fat” 金三胖) since 2013.

CDT Chinese editors noted that this and other related terms were blocked from both posting and searching on Weibo this week:

Some variations including 金三月巴 and 金三月半, which divide characters from the above terms into their separate components, are also blocked. "Kim Fatty III" and "Fatty III," together with the more mundane "Kim Jong-un," "Xi Jinping," and "North Korea," all appeared in FreeWeibo‘s top ten Hot Searches on Wednesday. The site’s archive includes deleted posts on the subject including "reform and opening is North Korea’s only way out" and "someone said: however you feel about this trade war, Fatty III is the biggest winner! ?"

At What’s On Weibo, Manya Koetse described handling of the news on the social media platform:

[…] But online censorship was also at its height when news of the meeting was released by Chinese state media. Although the news articles received thousands of comments on social media, most of them were no longer able to view on Wednesday late afternoon (Beijing time), while other comment sections only showed the “carefully selected comments” (“以下为博主精选评论”). Individual posts about the event were hard to find.

One video, posted by the Chinese Wall Street Journal on Weibo, focused on a supposed meeting between Trump and Kim Jong-un – saying it would be a “big breakthrough” – and was soon taken offline after it was already viewed 30,000 times. [Source]

Noting the fat-shaming tendency evident in references to Kim, the Inkstone’s Xinyan Yu described "Kim Fatty III" as "a nickname born of a little bit of malice, and strangely, a bit of fondness, as well":

Malice because he’s a dictator of a hereditary Communist dynasty ruling over people who probably weigh half what he does; and fondness because it’s the kind of nickname you’d give a mischievous family member.

[…] In 2016, it was reported by international media that the term “fatty Kim the third” had been banned on China’s social media and search engines.

“The Chinese government is committed to building a healthy and civilized environment to express opinions,” spokesperson Geng Shuang said. “We do not agree with the use of derogatory terms to describe leaders of any nations.”

[…] Some have called the term “the barometer” for China-North Korea relations – it disappears when the two nations are friendly and returns when they are not. [Source]

The meeting and its effusive coverage in North Korean and Chinese official media suggests renewed warmth in this relationship after several chilly years. The New York Times’ Steven Lee Myers and Jane Perlez note that Kim had "rebuffed overtures from China, and purged officials who had previously served as the main channels to Beijing, including his uncle, who was executed." At the BBC, Ankit Panda noted that "like Kim, Xi – following a recent change to China’s constitution – will almost certainly lead his country for life, so their personal relationship matters." Panda is also an early participant in an ongoing China File conversation on the visit.

Elsewhere, the NYT’s Perlez examined the visit’s wider international implications, describing it as a demonstration of China’s decisive role in anticipated nuclear negotiations and "a reminder […] of what a strong hand [Kim] has going into talks, first with President Moon Jae-in of South Korea next month and later with President Trump." Reuters’ Josh Smith and Soyoung Kim focused on the domestic implications of Kim’s professed openness to denuclearization, citing former South Korean vice unification minister Kim Hyung-suk: "Kim Jong Un would seek to propagate the idea that he induced the U.S. and international community’s ‘surrender’ by having mastered nuclear weapons." Their report also noted former senior U.S. diplomat Evans Revere’s skeptical view that "those of us who have negotiated with the North Koreans know what they mean (by denuclearisation)": not just one-sided disarmament, but a withdrawal of American troops and deterrent "nuclear umbrella." Chinese North Korea expert Yang Xiyu expressed similar doubt, telling the NYT that Kim "is starting a new game where he could make concessions on denuclearization. […] At most, he will cut the grass, but he will not pull out the roots."

The North Korean crisis has morphed faster and more surprisingly in the first three months of 2018 than at any time since the death of Kim Jong Il, in 2011. Having spent much of the past two years taunting and defying the outside world, Kim, since New Year’s Day, has dispatched a delegation (including his sister) to the Winter Olympics in South Korea; pursued talks with President Moon Jae-in; received envoys in Pyongyang; proposed a summit with Donald Trump and a pause in his weapons-testing; and, most recently, agreed to Xi’s invitation to patch up tattered ties with China.

[…] “They’ve probably reached a point in their weapons program where they feel a pause is fine. They don’t need to test, and they could still advance and progress without these big demonstrations,” Victor Cha, a former director for Asian affairs in the National Security Council who is now a professor at Georgetown University, told me. “But the other piece of it is, I think, they’re feeling a lot of pressure from the sanctions. The last U.N. Security Council resolution basically sanctioned a hundred per cent of North Korea’s external trade. So this is unprecedented. And then the other thing is, I think, they are worried that the U.S. might do something crazy. I think they are genuinely worried about that.”

Whatever the precise parameters of Kim’s motivation, his China play has made it more difficult for Trump, who would have preferred that Beijing remain at odds with Pyongyang. Kim and Xi have re-scrambled the perceived loyalties and suspicions that will shape any potential encounter between North Korea and the United States—at the negotiating table or on the battlefield. This game is in the early stage. There may yet be more handshakes to come.[Source]