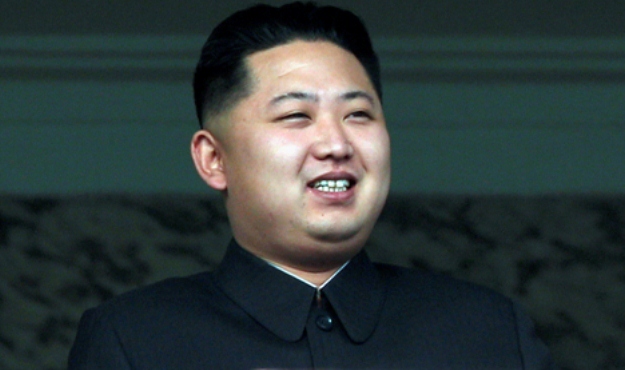 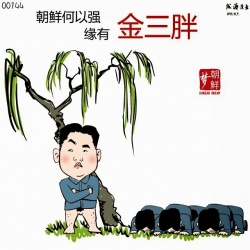 (“How did North Korea get strong? Because of Kim Fatty III.” Inspired by a Global Times Chinese dream ad. (Artist: Cheng Tao 成涛)

Xuanhuwencha (@悬壶问茶): I asked Uncle Doorman, “Why does Kim Fatty III have to play hide-and-seek? Uncle Doorman (Menweidaye @门卫大爷) says, “Fatty III has three goals: one, to test the loyalty of his cadres; two, to see how the U.S., U.K., Japan, and South Korea react; and three, to slap Chinese intellectuals in the face. (October 14, 2014)

On November 8, 2016, netizens discovered that searches for “Kim Fatty III” yielded no results on Weibo or Baidu. Some attempted to explain the lack of results by guessing that North Korean leaders had asked their allies in Beijing to root out the disrespectful term. Netizens also shared screenshots of an unconfirmed news story headlined “North Korea Requests Chinese People Respectfully Address Kim Jung Un, Not Call Him Other Names or Kim Fatty III!” (朝鲜要求中国人必须尊称金正恩，不许直呼其名也不能称呼为金三胖！) In the days that followed the blocking, netizens continued to poke fun at the young dictator (and discuss the original moniker’s sensitivity) by using “金三月半” (Jīn Sān Yuèbàn, literally “Kim 15th-of-the-month III”), splitting the character 胖 (Fatty) into its component parts.

The phrase had earlier been blocked from Weibo search results in September of 2013.