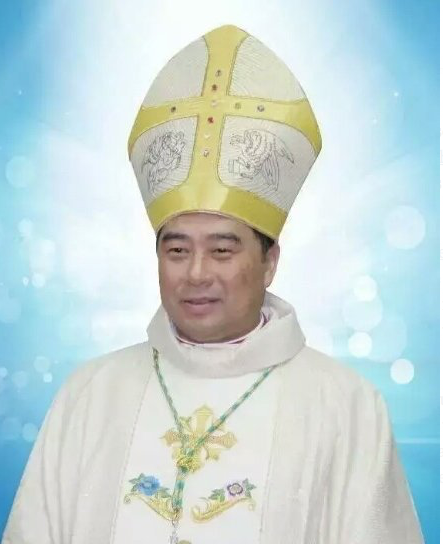 Earlier this week AsiaNews.it, a news site run by the Pontifical Institute for Foreign Missions, reported that “underground” bishop Guo Xijin, recognized by the Vatican but not by Beijing, had been detained by police after recently being asked to cede his seat to a government-recognized cleric. The AFP reports that Guo was released after a day in detention, providing context on the situation:

“He has returned home. He was taken away on Monday evening and returned on Tuesday evening,” the source said, requesting anonymity to avoid repercussions.

[…] The AsiaNews report said Guo was detained along with another official of the diocese. The status of the second official is unclear.

The local police and the Fujian provincial office of religious affairs said they were unaware of the arrests. The Vatican has not commented on it.

[…] Guo, 59, is recognised by the Vatican, but not by the Chinese authorities.

He was recently urged by the Vatican to step aside for Bishop Vincent Zhan Silu and to accept being demoted to auxiliary bishop, as part of preparations for the agreement.

According to Catholics consulted by AsiaNews, the disappearance of the bishop of Mindong can be explained by his refusal to celebrate Easter with the prelate who will replace him. [Source]

Catholicism in China has since 1957 been supervised by the Chinese Patriotic Catholic Association, a government body unrecognized and at times deplored by the Vatican. Chinese Catholics unwilling to cede spiritual authority to Beijing have been forced to worship clandestinely in “underground churches.” Since being inaugurated in 2013, Pope Francis has repeatedly indicated a desire to improve relations with China— a goal that has drawn criticism. In February, a Vatican source reported that a deal between the Holy See and Beijing on the appointment of bishops in China—long a point of contention—was ready and could soon be signed, news that was unsurprisingly criticized by some Catholic leaders. The New York Times’ Ian Johnson situates Guo Xijin’s short detention into the context of the expected deal, citing parishioners who believe the detention represented an effort to keep him out of public view during the Easter weekend:

A Rome-based news agency has reported that Guo Xijin was briefly detained on Monday because he refused to celebrate the upcoming Easter Mass with the government-approved bishop, but people working in his parish office said the aim was to keep him out of the spotlight during the days around Easter, which is celebrated this coming Sunday.

Bishop Guo, 59, of the Mindong diocese in central-eastern China, was taken to the city of Xiamen. He was allowed to return home on Wednesday for family reasons, but members of his staff said he was expected to resume his forced vacation later this week.

He had been asked by Rome to step aside in favor of a Communist Party-approved bishop in the region. This was meant to be a key plank in Rome’s efforts to heal a decades-long rift in the Roman Catholic Church in China, which is divided between underground worshipers, priests and bishops loyal to Rome and Beijing-approved churches that some worshipers consider to be illegitimate. [Source]

Bishop Guo last month told the New York Times that he would step down if asked to by the Vatican, warning that in his estimation Beijing sought to sever ties with the Holy See.

State-affiliated Global Times this week quoted a government-approved bishop saying that the China-Vatican deal was in its “final stages” and could be signed as early as the end of the month. The AFP’s Joanna Chiu reports that a Vatican spokesman has hampered that optimistic estimation, and relays concerns over the potential deal:

“I can state that there is no imminent signature of an agreement between the Holy See and the People’s Republic of China,” said Vatican spokesman Greg Burke.

“I would like to stress that the Holy Father Francis remains in constant contact with his collaborators on Chinese issues and is accompanying the steps of the ongoing dialogue,” he added.

[…] While some believe an agreement will bridge divisions between the two, others fear concessions to China may backfire on the “underground” devout, many of whom suffered years of persecution for following the pope.

[…] Some opponents — among them the militant Hong Kong Cardinal Joseph Zen — say an agreement risks abandoning loyal believers and amounts to a deal with the devil.

A lay Catholic in central China told AFP that the deal would “certainly” lead to “less freedom for the underground Church”. […] [Source]

Coverage from Reuters notes that while the deal may not be as imminent as described by the Global Times, bilateral dialogue towards reaching the deal continues. Also at Reuters, Philip Pullella and Yimou Li report that Taiwan, a longtime diplomatic ally of the Vatican, nervously awaits a decision that could result in severed relations with Taipei:

As the Vatican and China move closer to a historic deal on the appointment of bishops, which would signal a warming of once-frigid relations, diplomats and scholars say Taiwan could lose the most from the deal.

[…] It would also leave Taiwan in the diplomatic lurch.

The Vatican is one of only 20 states that still recognize Taiwan, officially known as the Republic of China. Beijing insists that if countries want relations with it they must break ties with Taiwan.

[…] A senior Vatican official said however that the accord on bishops “is not a political one,” suggesting that it does not include any formal link to diplomatic relations and that the Vatican will not be the next country to switch relations to China from Taiwan. [Source]