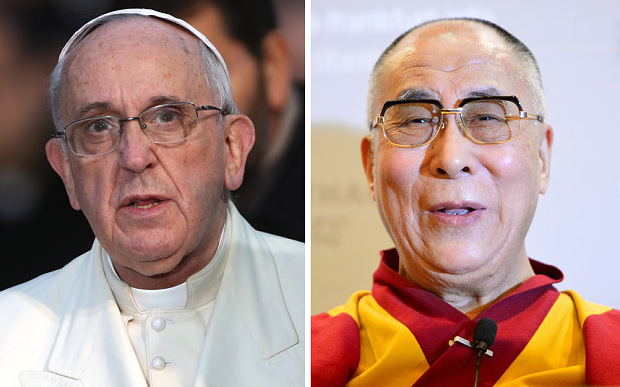 The Telegraph’s Nick Squires reports that Pope Francis has declined to meet with the Dalai Lama and other Nobel Laureates in Rome this weekend, apparently to avoid angering Beijing. According to the Dalai Lama himself, the Vatican decided against the meeting “because it could cause inconveniences.”

The decision reflects an acute diplomatic dilemma for the Pope, at a time when the Vatican is attempting to improve its relations with Beijing and wants to avoid upsetting the Chinese authorities for fear of provoking trouble for the country’s Catholic community.

The snub is hardly in keeping with the Argentinean pontiff’s enthusiasm for dialogue with other religions, an agenda he has pursued in recent months on trips to Turkey, Albania and the Holy Land.

[…] The event was originally due to be held in South Africa but had to be moved after the Pretoria government refused to issue the Tibetan spiritual leader a visa, fearing repercussions from Beijing. [Source]

Beijing is wary of Christianity’s growth in China. In Zhejiang, where it appears to have established a particularly firm hold, local officials have waged a campaign of cross removals and church demolitions. (In Tibetan areas, on the other hand, officials have reportedly turned a blind eye to evangelical missionaries seeking to convert Buddhists.) The Pope reached out to Beijing on a recent Asian tour, during which he was able to fly over but not to China. In July, Hong Kong cardinal Joseph Zen warned him to keep his distance, saying that he would be manipulated if he visited the mainland.

There have also been persistent rumors about a visit to China by the Dalai Lama and a general thawing of relations between him and Beijing, but both have been firmly dismissed by Chinese authorities. In September, China urged him to “respect reincarnation” after he suggested that he could be the last of his line. In the meantime, fear of Beijing’s displeasure has left him increasingly isolated.