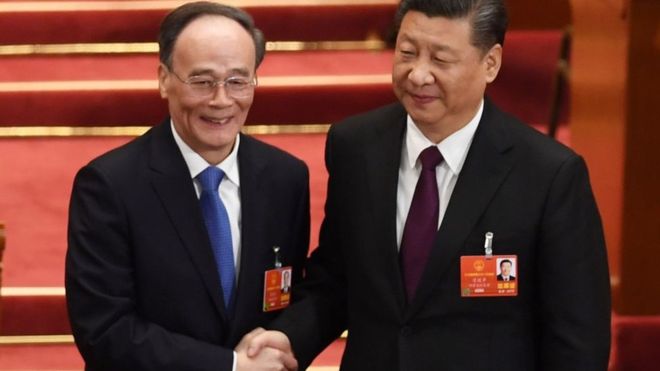 On Saturday in Beijing 2,969 of China’s 2,970 member parliament voted in favor of 69-year-old Wang Qishan being China’s new vice president, and unanimously endorsed Xi Jinping’s second term as president. The move followed the National People’s Congress’ approval of a constitutional amendment that removed term limits on both of the two top state positions. Wang, who stepped down from his previous post heading the Central Commission for Discipline Inspection—China’s top graft watchdog—in October, currently holds no Party position. His former subordinate and fellow Xi ally Yang Xiaodu was named head of the new National Supervisory Commission, a controversial consolidation of several anti-graft agencies.  Rumors of Wang’s possible vice presidency have been swirling since he was appointed delegate to the NPC soon after his “retirement” from the CCDI and the Politburo Standing Committee, though analysts expressed uncertainty over the details of his potential role as vice president, pointing to a constitutional clause leaving his job duties to the discretion of the president. At the South China Morning Post, Matt Ho reports on Wang’s expected duties as vice president of China:

Sources have said Wang is expected to be given a portfolio covering China’s ambitious global affairs agenda, including handling rocky relations with the United States.

With a trade war looming between the US and China, Wang, 69, will have to draw on his experience as a problem solver for the job.

The exact role he will play in relation to Xi, who is now the most powerful Chinese leader since Mao Zedong, and other members of the new all-star foreign policy team could also be of interest.

Although Wang no longer holds a senior rank within the party, as vice-president he will join its foreign affairs leading group in charge of policymaking, which is headed by Xi. [Source]

Ananth Krishnan tweeted that CCTV’s framing of Wang’s acceptance of the post suggests that despite lacking a position on the Politburo Standing Committee, he may have a similar cache of power:

BBC News highlights the the possibility that Wang’s close relationship with Xi and the newfound lack of a term limit on his post could significantly elevate the historical significance of the vice presidency, and briefly surveys Wang’s official résumé:

China’s constitution allows the vice-president to “assist” in his superior’s work and to carry out presidential duties on his behalf – meaning Wang Qishan, possibly in his role for life, could be far more than the figurehead his predecessors were.

[…] [After becoming a policy researcher in the 80’s, h]e became mayor of Beijing during the Sars outbreak there in 2003, and was executive chair of the city’s Olympic committee ahead of the 2008 games.

In 2007, he joined China’s Politburo and in 2009 became then-president Hu Jintao’s chief negotiator in trade talks with the US.

[…] However, Mr Wang is best known for his most recent post – leading China’s anti-corruption investigation.

[…] During President Xi’s first five years in office, 1.34 million officials at high and low levels – people Mr Xi disparaged as “tigers and flies” – were brought down by corruption and disciplinary charges.

Mr Wang, reportedly a friend of Mr Xi’s from their youth, led the charge – becoming a feared enforcer for the Xi administration. […] [Source]

At the Financial Times, Tom Mitchell notes Wang’s reputation as a knowledgable “America hand” with close relationships to senior Wall Street figures and a vast knowledge of the history and economics of the U.S.—a figure uniquely qualified to “defus[e] Mr Trump’s ticking trade bomb—or helping to manage the fallout after it explodes.” At The New York Times, Chris Buckley similarly cites indicators that Wang may act as a hopeful Trump-whisperer ahead of expected U.S. trade sanctions, but also highlights that he may be in the new post to continue on as Xi’s closest formal counselor:

[…] “Wang Qishan is one of the most important figures in Xi’s inner circle, and this position allows him to retain a formal position,” said Wu Qiang, a former lecturer in political science at Tsinghua University in Beijing who now works as an independent researcher.

[…] “I think Wang will play an important role in determining whether Xi succeeds over the next five years and can smoothly make a transition to a third term,” Mr. Wu, the analyst in Beijing, said. “Xi thinks there are many challenges still ahead, I believe, so Wang has been kept on as kind of a consultant.”

Mr. Xi and Mr. Wang first met about five decades ago during the Cultural Revolution, when they were both sent from Beijing to work as “sent down youth” in rural northwest China, a poor and dusty corner of the country. Mr. Wang lived on a commune about 50 miles from Mr. Xi, who has said Mr. Wang stopped by for a night and took away a book on economics. [Source]

At The Diplomat, Charlotte Gao reports that Wang’s new post alongside Yang Xiaodu’s at the head of the NSC and Zhao Leji’s as CCDI chief suggests that Xi’s ongoing anti-corruption campaign is soon to be kicked into a new phase of intensity. For much of the past five years, many analysts have viewed the anti-graft campaign as at least in part a means to help Xi consolidate power.

[…] According to his resume, Yang, 64, has been working as a deputy director of the CCDI since 2014. This means that he had worked as a direct subordinate to Wang Qishan — head of the CCDI from 2013 to 2017 —  and Zhao Leji. It’s also highly likely that Yang will keep his position in the CCDI — a move that can guarantee the CCDI’s effective leadership over the new NSC, and by extension the Party’s absolute leadership over the state. Yang may be chief of the NSC, but he still will have to answer to Zhao at the CCDI, making the hierarchy of the two organizations clear.

[…] As The Diplomat has been following, the Chinese government announced in late February that it has taken over Anbang Insurance Group, the Chinese financial conglomerate that purchased the luxury Waldorf Astoria hotel in New York in 2014. The announcement also confirmed that founder Wu Xiaohui, who had been detained in China for unknown reasons since early June 2017, is officially being prosecuted for financial crimes.