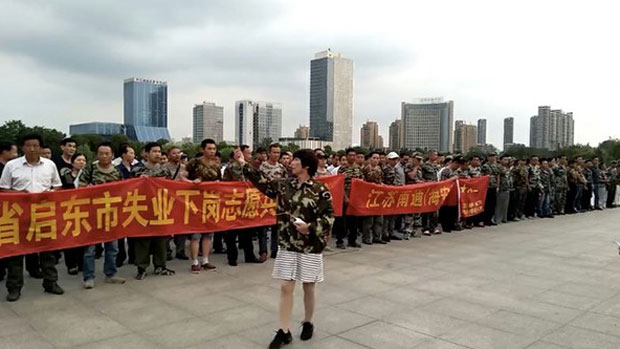 PLA veterans have staged demonstrations against paltry pensions and inadequate welfare support in front of government offices across China over the last few years. (the AP reported that over 50 such demonstrations occurred in 2016 alone.) In response to this trend, China opened its first Ministry of Veterans Affairs in April, a move that some veterans saw as too little and too late. After several more recent veteran protests in Beijing and other cities across China, last week a mass demonstration took shape in Zhenjiang, Jiangsu, with veterans demanding better welfare rights and castigating violent attacks against other similar campaigns in China. Minnie Chan at the South China Morning Post reports that armed police were sent in to end the protest:

The mass gathering in Zhenjiang, Jiangsu province, was held following a number of violent attacks on campaigning veterans in other parts of the country.

Several people who took part in the protest told the South China Morning Post that it ended when the Jiangsu government sent in hundreds of armed police. Officials from other provinces and cities also arrived in Zhenjiang to “convince” people to go home, they said.

[…] A former military man from southern China’s Guizhou province said he was upset at how the latest protest had ended.

“We had to make a compromise … but we are still very angry,” he said. “Assaults on veterans is a public humiliation of China’s military, but it’s just the tip of the iceberg on the issue.” […] [Source]

More on the police break-up of the Zhenjiang demonstration from the AFP’s Joanna Chiu:

“Scores of armed police came yesterday along with government officials to force everyone to go home. Some people were detained and we’re not sure about their whereabouts,” a witness who supported the veterans told AFP.

[…] Witnesses said hundreds of veterans came to Zhenjiang from across the country after unconfirmed reports that security guards had beaten a group of elderly veterans outside a municipal building earlier this month.

“They were very well organised with tents and provisions, and every day, people from Zhenjiang came to join and support them,” a local schoolteacher told AFP, also requesting anonymity out of safety concerns.

The witness recorded a video showing about 100 protesters outside a hospital where at least one beaten pensioner was believed to be recuperating.

Another witness video showed soldiers marching with red banners declaring: “We are Communists, not criminals.” [Source]

At The New York Times, Chris Buckley reports further on the most recent similar protests—which have been organized on veteran-frequented online chat rooms—and the challenge they pose to the Xi Jinping administration:

[…] The recent burst of veteran-led protests does not present a dire threat to Communist Party rule, which remains broadly popular and backed by a daunting police apparatus. On Monday, the protests in Zhenjiang appeared to have dispersed.

But the demonstrations show how even under the sweeping dominance of President Xi Jinping discontent persists, taking forms that can catch the government by surprise. The veterans, coming from across the country and with tight bonds formed in military service, are a particularly stubborn headache.

[…] Despite such steps [as launching the new Veterans Affairs Ministry], many former soldiers feel a gulf between the rhetorical laurels from the government and the practical problems they face. The new ministry has already become a destination for veterans who feel that local officials have ignored their grievances.

[…] “A new ministry gives veterans an address, but no more power,” he [Neil Diamant, a professor at Dickinson College who studies protests by Chinese veterans] said. “They remain supplicants for state largess — and this is exactly how the government wants it to remain.” [Source]

More context on Xi’s earlier attempts to appeal to the generally highly patriotic PLA veteran population, and how this surge of public grievance represents a challenge for his administration, from the AP’s Gerry Shih:

But the nationalist drumbeat rings hollow for many retired soldiers who feel left behind, and they have taken to the streets in droves to complain about having to fend for themselves with meager pensions and little support. The unrest poses a delicate political challenge for Xi, who has made his affinity for the military one of the pillars of his folksy image.

[…] The challenge to Beijing’s ability to manage this resentment is likely to continue after China announced in 2015 it would reduce the size of the armed forces by 300,000 troops and said last year it would downsize its ground forces further while investing in its ability to project power abroad.

The angry veterans, part of an estimated 57 million former military personnel in China, pose a peculiar social stability dilemma for Beijing. The veterans are generally deeply patriotic and wave red flags and banners during demonstrations. They profess loyalty to the Communist Party and admiration for Xi while directing their ire at corrupt local officials.

But Chinese leaders are wary of mass social movements and have moved quickly to squelch the unrest, further inflaming tensions among the veterans who feel betrayed. Discussion of the protest was also tightly policed online this week. [Source]

CDT Chinese editors compiled video footage of the protest and police crackdown in Zhenjiang, as shared on Twitter. Several tweets highlighting this standoff between soldiers have been translated below:

Formidable veterans. Veterans from across the country successively assemble in Zhenjiang. One veteran said: “There are helicopters in the sky and all of Jiangsu’s police have come, but our ranks are still greater than theirs.”

The strike on Zhenjiang——active duty VS retired soldiers!

It is said that military retirees and active members are exchanging blows! A cultural exercise becomes a military exercise!