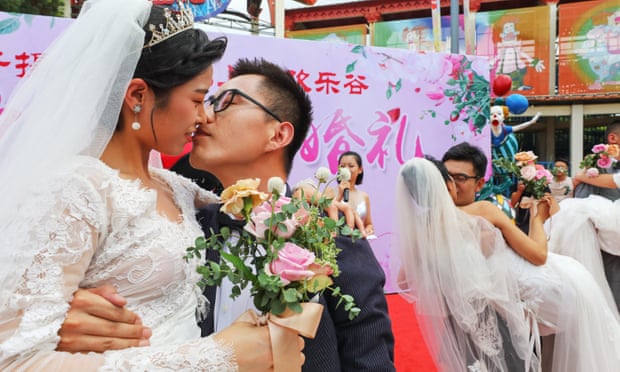 State-affiliated nationalist tabloid Global Times reports that all references to “family planning” have been omitted from a draft civil code being deliberated this week by top lawmakers at the Standing Committee of the National People’s Congress. Scheduled for adoption in 2020, the revised civil code sends a clear signal that Chinese leadership is moving to end restrictions on the number of children families can have. The controversial one-child policy was scrapped in 2016 in favor of a two-child policy, allowing Chinese couples to have up to two children as the government gradually rolled back long-held birth restrictions. From Zhao Yusha:

The removal of contents related to family planning policy in a draft civil code is the latest official signal from China that it may soon scrap the policy, as the country’s demographic structure undergoes fundamental changes, demographers noted on Tuesday.

Considering the changes in the country’s demographic situation, provisions related to family planning in current laws are not included in a draft civil code, which was presented to a bimonthly session of the National People’s Congress (NPC) Standing Committee, expected to run till Friday, the Xinhua News Agency reported.

The revised draft will be submitted to the plenary session of the NPC in March 2020, according to Shen Chunyao, head of the Legislative Affairs Commission under the NPC Standing Committee.

That would suggest that the decades-old birth restrictions would not be enforced after the law went into effect, since the code is intended to govern all aspects of private life from contracts to company registrations to marriages.

[…] Such consequential decisions would require party approval, which could come as soon as an expected meeting of the party’s Central Committee in the fourth quarter of the year.

The final draft of the Civil Code was expected to be submitted to the National People’s Congress for passage in the first quarter of 2020.

“Family planning has always come first as policy and then become law,” said He Yafu, an independent demographer based in Guangdong and long-time advocate for policy changes.

“It is expected that the policy would be lifted by the party first, then the legal procedures would follow to remove it in relevant laws.” [Source]

If approved, the decision would reverse nearly four decades of family planning policies limiting the number of children couples are allowed to have. The one-child policy was first implemented in 1979 to slow population growth, address environmental problems, and ease government pressure to feed additional mouths. Enforced through family inspections and heavy fines directed at violators, the much-criticized policy has left an infamous legacy of forced abortions, sterilizations, and infanticide, and has been credited with contributing to demographic distress. It also gave rise to an entire generation of “black children” or hei haizi–children who were born illegally outside the one child policy and thus excluded from the national household registration (hukou) system and the rights and benefits that it accords. CDT has recently translated a WeChat essay telling the birth story of a hei haizi.

Strict population control has led to serious demographic imbalances and a growing shortage of workers. The current move to address China’s declining birthrate is motivated by mounting concerns that a shrinking workforce and a rapidly ageing population comprised of 34 million more men than women would lead to serious economic and social problems. Irish Times’ Clifford Coonan reports that some localities have already started exploring ways to boost population growth.

The proposals are being discussed by a group of senior legislators in Beijing. The government wants to add millions of extra children by the end of this decade, to make up 30 million more labourers in the workforce by 2050.

Birth rates in the region are falling as couples choose to have fewer children, in line with changing demographic patterns in middle-class societies worldwide. They are also scared off by high education costs and property prices.

The authorities had hinted change might be coming with a stamp due to be released for the Year of the Pig next year featuring a family of two pigs and three happy piglets.

[…] The pressure to boost the birth rate is keenly felt in places such as the poor northwestern province of Shaanxi, where authorities have urged a scrapping of all limits and called for incentives to encourage more babies, such as tax breaks and “baby bonuses”.

Other subsidies from local authorities to encourage more children include contributions towards the cost of a wedding, such as photographs and even pitching in towards a dress. [Source]

Many fear that abolishing family planning now will do little to solve China’s entrenched demographic problems. Moving to the two-child policy at the start of 2016 has not led to significant improvements in the fertility rate. Steady decline in marriage registration and rising living and education costs have led many families to decide against having more children despite government incentives. As the Party scrambles to combat the country’s demographic time bomb, additional questions are raised about women’s reproductive rights under a new regime that encourages reproduction. From Benjamin Haas at The Guardian:

Another concern is Chinese officials could “intervene as aggressively in pro-natalist policies as it did in anti-natalist policies,” she added. “This could have very negative effects on the position of women in the labor market, in society, and in the family.”

[…] Two Chinese academics caused a social media storm earlier this month when they proposed that couples with one or no children should pay into a tax-like “maternity fund”.

Hong Fincher said it remained to be seen how the Chinese government would implement any changes. She said incentives to have more children had not worked and the government might resort to other measures such as pressuring young women to get married and restricting abortions.

“Whatever policy they implement,” she said, “they will continue to control women’s reproductive rights.” [Source]

At TIME, Charlie Campbell explores the potential implications for gender equality that unrestricted births may bring forth:

Paradoxically, nixing birth restrictions could also stand to negatively impact Chinese women. While the One Child Policy was responsible for 30 million “lost” female babies and fetuses, the girls who survived were empowered with hitherto unseen resources, not to mention opportunities for higher education and careers beyond.

Today, despite the gender imbalance, there are more female than male students at Chinese universities. Women are responsible for 41% of Chinese GDP — the highest proportion in the world. Some 72% of Chinese mothers are in full-time work. (In Switzerland it’s 15%). Ninety-three of the world’s 123 self-made female billionaires are Chinese.

“Because, during the One-Child Policy, girls got equal access to resources,” says Hesketh. “Foreign universities are full of Chinese girls whose parents are paying for them.”

But already, following the shift to the Two-Child Policy, mothers with only one child report getting passed over for promotion by employers wary of another bout of maternity leave and potential resignation due to family pressures. Sociologists warn removing all limits may cause such discrimination to metastasize. Women who don’t want more children are already feeling pressured by husbands, parents — and the government — to have them.

Although abolishing the Two-Child Policy is a net positive for freedom of choice, the downside is that it risks curtailing much of the gender equality it spawned. What’s more, the immediate consequences of reversing the policy may actually be an economic brake, as boosting the number of young children will actually shrink the working cohort size in the short-term. [Source]