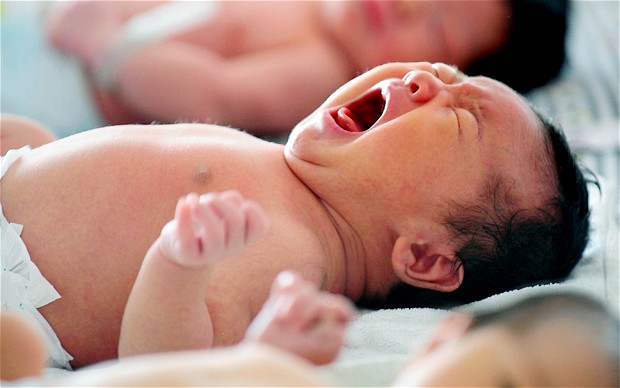 After adjusting family planning rules to allow families to have two children, the Chinese government anticipated a surge in births, which would ease demographic challenges such as an aging population and a labor shortage. New statistics show that, to some degree, their expectations have been met. From CBS News:

According to the Communist Party’s National Health and Family Planning Commission (NHFPC,) there were 17.86 million births in China last year, an increase of 7.9 percent from the previous year.

“It demonstrates that the universal second-child policy came in time and worked effectively,” said Yang Wenzhuang, a division director of the NHFPC in a press release.

[…] In their press release, the NHFPC said that “by 2050, the policy is expected to bring about an extra 30 million working-age people and reduce the nation’s aging rate by 2 percent, commission projections show.”

However, the NHFPC said the Communist Party’s leaders need to come up with better policies to support couples willing to have more than one child, “particularly in terms of maternity education and health services.” [Source]

Some have advocated better policies to support China’s aging population, who won’t immediately benefit from an increase in the birth rate. An article in the Lancet by Yi Zeng and Therese Hesketh looks at the impact of the two-child policy and argues that, “more sound policy actions are needed to meet the social, health, and care needs of the elderly population.”

Meanwhile, many families are choosing not to have a second child, due to financial and other pressures. The Nikkei Asian Review interviewed Weilin Zhao, a senior associate at the Fujitsu Research Institute’s Economic Research Center, about whether China could expect sustained population growth as a result of the eradication of the one-child policy:

Q: Statistics aside, can you tell me how most Chinese people reacted to the country’s two-child policy shift?

A: I contacted several fellow alumni of my junior high school and university in China via WeChat — China’s popular messaging app — and asked them whether they are willing to have a second child. Some of my friends whose children are 5 or 6 years old said they do not want to give birth to another child, because they have just completed the most labor-intensive period of child rearing. Another friend whose child goes to junior high school voiced her reluctance to have a second child, citing long intervals between pregnancies. As my ex-university classmates who have pursued careers tend to marry later, they said it would be hard for them to give birth after moving into middle manager positions.

Although many women expressed willingness to have a second child, they said they are unable to do so due to the high cost of raising a child, and also because their parents are too old to [assume the responsibility of] caring for grandkids. [Source]

An article in The Economist also questions whether the recent surge in number of births will significantly alter China’s demographics over the long-term:

[T]he increase was smaller than expected. When they introduced the two-child policy, family-planning officials forecast that between 17m and 20m babies would be born every year between 2015 and 2020—an increase of about 3m a year. In the event the increase in 2016 was only 1.3m. Moreover, if pent-up demand explains much of the increase, that influence will fade. After a brief spate, the flow of water through the dam will go back to what it was before—unless there is a change in China’s underlying fertility rate, meaning unless the average woman of child-bearing age decides she wants more children.

So far, that does not seem to be happening. It is true that the short-term rise in births may be hiding long-term changes but, anecdotally, there is little sign yet of a shift towards wanting larger families. More than 30 years of relentless propaganda have persuaded most Chinese that “one is enough”. In a government survey in 2015 three-quarters of couples said they did not want a second child, citing the cost of child care and education. People’s Daily, the Communist Party’s main mouthpiece, recently lamented that China’s fertility rate, at 1.05, was the lowest in the world (others put the rate a little higher). It has fallen consistently since 1950. [Source]

According to a Wall Street Journal report, the government has vowed to stick with a two-child policy despite continued demographic concerns and uncertainty about the impact of the new policy:

The country’s State Council, its cabinet, unveiled a key plan detailing deep demographic changes over the next 15 years, including low birthrates and a rapidly aging population, but said it would stick to a policy of letting families have a maximum of two children.

“Problems and challenges associated with population security, and the balance between population, economy and society, are not negligible,” the State Council said in the blueprint released Wednesday.

China’s total population, which stood at around 1.37 billion in 2015, will likely peak at 1.45 billion in 2030, it said. The population will grow at a slower pace after 2020, as the number of women of childbearing age drops while death rates rise with the elderly constituting a larger share of the population, it said.

The timing of the peak mirrored projections by the United Nations, though the U.N. had estimated a peak of 1.42 billion in 2030, according to a report in 2015. [Source]