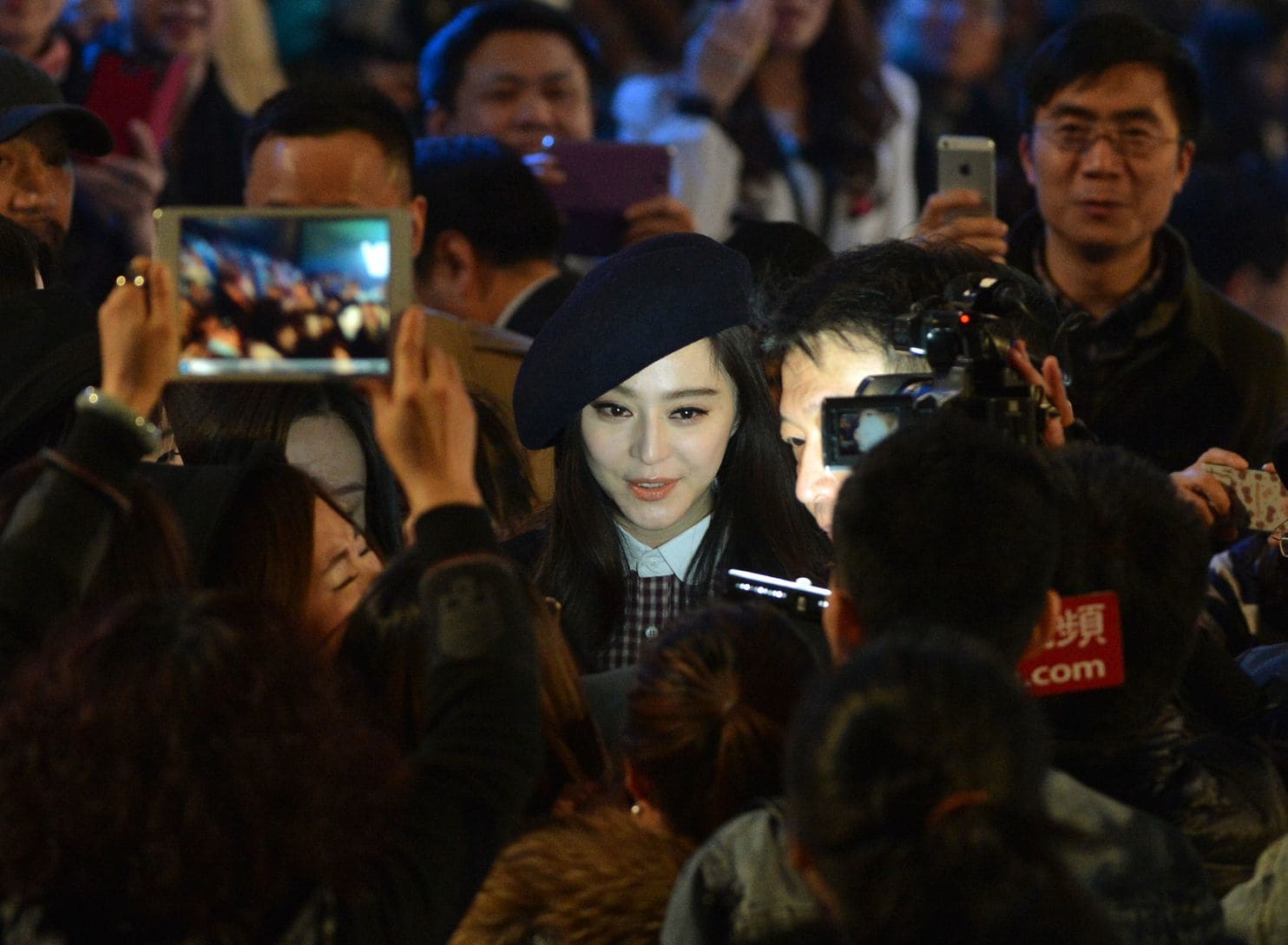 Famous Chinese actress and singer Fan Bingbing has been given a score of zero in a ranking of celebrities’ social responsibility jointly conducted by academics at the Beijing Normal University and the Chinese Academy of Social Sciences. The low rating fuelled speculation that Fan may have run into trouble with the authorities after being placed under investigation over tax evasion allegations involving the use of “yin-yang contracts,” a practice widespread in the entertainment industry whereby stars under report their earnings by submitting a copy of their contract with a reduced salary figure to tax authorities. A directive from propaganda authorities following the allegations against Fan ordered websites to “hold back” on publishing content on the practice. Fan was last seen during a public appearance at a children’s hospital on July 1st. Gerry Shih at The Washington Post reports:

Fan Bingbing is one of China’s biggest celebrities, a ubiquitous actress, model and singer who earned more in 2016 than Hollywood A-listers such as Amy Adams and Charlize Theron, according to Forbes.

But in July, the “X-Men” actress suddenly vanished. And in the weeks since, the mystery surrounding her disappearance from public view has only deepened amid speculation that she ran afoul of Chinese authorities.

The latest clue emerged Tuesday after a state-affiliated think tank and Beijing university ranked Fan dead last in their annual “Social Responsibility Report” — she earned a 0 out of 100 — citing her “negative social impact,” among other things.

The report, which was widely covered by state media, didn’t shed any more light on Fan’s predicament, but it does add to the sense that China’s Communist Party is sending a message to the country’s burgeoning entertainment industry.

BBC’s Kerry Allen has more on the nature of the scoring system:

It praises celebrities who have become “relatively strong role models”, but also highlights cases where it says they have had a “negative” social impact.

[…] The authors said they studied the behaviour of 100 Chinese singers, actors, and public figures – based in China and abroad – to assess the extent of their social responsibility.

They did not specify exactly how they arrived at the results in the test, but said that their findings were based on “research and web-scraping”.

[…] Only nine celebrities were deemed to be socially responsible enough, however, with a pass requiring a score of more than 60%.The report stressed that celebrities had to do more to promote “positive energy” and hinted that they needed to be more aware of behaviour and actions that might have a “negative social impact”. [Source]

Only a handful of celebrities scored a passing grade, with those coming first awarded for the positive social impact of their philanthropy work and their public image as “relatively strong role models.”

In recent years, the Chinese government has introduced a series of regulations targeting television and video content in an effort to curb the “negative” influence of celebrity displays of fame and wealth. In 2016, regulatory officials prohibited children from participating in reality television shows and limited programs showing overly materialistic content. Bloomberg’s Jing Yang De Morel writes that the social responsibility report comes amid a wider crackdown on the entertainment industry to rein in excessive compensation for celebrities. The move will likely force studios to make productions focusing more on quality rather than the number of A-list stars.

While authorities may not directly undermine bankable stars, industry trends show stellar casts are no longer sure bets.

Just before “Dying to Survive,” a low-budget Chinese comedy-drama without big stars became the summer smash hit, “Asura,” the big-budget, star-studded epic on mythology bombed at the box office and was withdrawn immediately after its opening weekend. Trade magazine Variety called it “the most expensive flop in Chinese history.”

“Story of Yanxi Palace,” a 70-episode drama co-produced by and streamed on iQiyi, China’s Netflix, emerged as a surprising summer hit with a mostly young, lesser-known cast. A Qing dynasty tale of scheming concubines, the drama has been streamed more than 15 billion times, according to iQiyi.

The success of the drama “brings a new turning point and new opportunities to the industry that has been pressured by excessive compensation for celebrities,” iQiyi CEO Gong Yu said in Beijing Aug. 26 at an event to celebrate the drama’s conclusion. “The industry should stop overcompensating celebrities in low-quality productions just because they have huge fan bases.” [Source]

While Fan has not been charged with any crime, rumours have surfaced that she may be facing an acting ban. From Patrick Frater at Variety:

A Hong Kong news outlet is reporting that Fan Bingbing, China’s highest-paid actress, has been banned from acting for three years amid allegations of tax evasion, but there has been no independent verification as yet of such a move.

[…] According to another report, Fan’s name has been stripped from publicity for Chinese war film “Unbreakable Spirit” (previously titled “The Bombing”), starring Bruce Willis and Adrien Brody, which was to be released in China this month. The movie now looks set to hit theaters in October.

The reports do not say whether Fan is forbidden from acting only in China or also abroad. She has been cast in “355,” an all-female action movie produced by Jessica Chastain, which was the hottest-selling film this year at Cannes. CAA was involved in the sale of China rights to Huayi Bros. for an estimated $20 million.

[…] China has banned prominent performers and directors in the past, including actor-director Jiang Wen and director Zhang Yimou, usually because their films are deemed politically unacceptable by China’s censors. Officials rarely announce or publicly confirm such bans, except when the courts are involved, as was the case of Jackie Chan’s son Jaycee, who was convicted of supplying drugs. [Source]