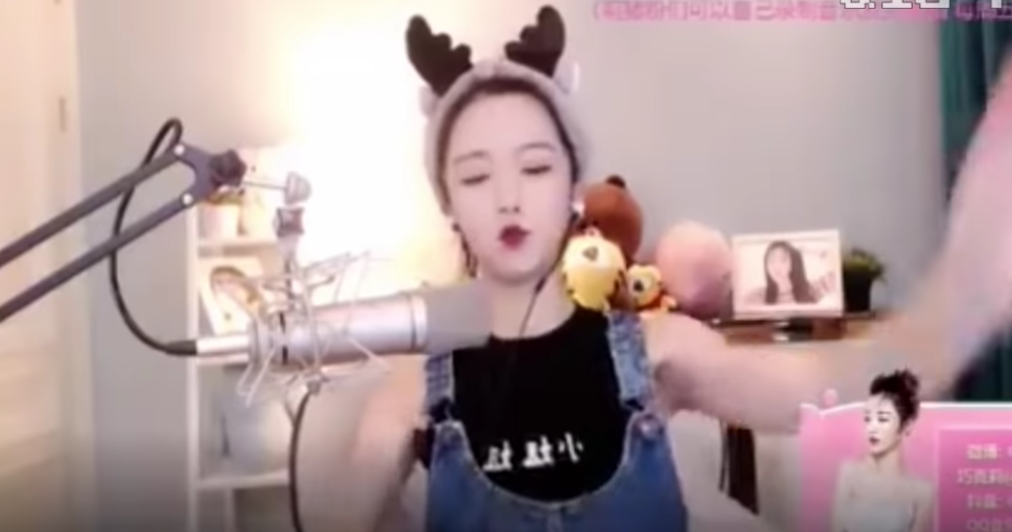 At Inkstone News, Mandy Zuo reports on the likely career-ending five-day detention of a young live-streaming star over a single line of China’s national anthem flippantly sung during one of her videos:

First coming to fame live-streaming her singing, she was reportedly signed by a video site for $7 million (50 million yuan). This summer, she released her first record and performed on national television. Online, she racked up as many followers as the hottest YouTube channels. And she achieved all this in the span of a year.

[…] It was all fun and games. But then she sang the opening words to the national anthem, March of the Volunteers, while waving her arms in the air like a conductor.

The Shanghai police described her behavior as “an insult to the dignity of the national anthem,” after some social media users reported her apparent levity.

[…] Video streaming site Huya, which was listed on the New York Stock Exchange in May, has blocked Yang and taken all her videos offline. She had about two million followers there.

And TikTok, another popular streaming platform on which she first rose to fame and had 44 million followers, has deleted all her videos. [Source]

[… I]n what has become something of a rite of passage for Chinese celebrities who fall afoul of the law, Ms. Yang issued two self-critical statements on her official Weibo account, apologizing for her “stupid, low-level mistakes.”

“I sincerely apologize for the fact that I did not sing the national anthem in the live broadcast in a serious manner,” she wrote. “My behavior deeply hurt everyone’s feelings. Sorry. Sorry to the motherland, sorry to my fans, sorry to everyone online, sorry to the platform.”

Earlier this month, Fan Bingbing, China’s most famous actress, also apologized on Weibo after being fined nearly $70 million in unpaid taxes and penalties. In her statement, she said she owed her success to the policies of the ruling Communist Party.

The Yang incident comes at a time when the Chinese government, under President Xi Jinping, has stepped up demands for patriotic devotion even in areas of life that are typically seen as apolitical. Last year, for example, a large number of Chinese celebrity gossip blogs were taken down as part of the Communist Party’s push to spread “positive energy” and “socialist core values.” [Source]

In August, streaming platform Douyu “pledged to launch a ‘patriotic education campaign’ for all hosts — taking them on regular visits to history museums and revolutionary landmarks to make sure that they ‘understand and remember history'” after one live-streamer made light of the Nanjing Massacre. Others have faced prosecution for challenging or mocking Communist heroes. In Yang’s case, no malice or overt disrespect is apparent:

China jails a video star. Her crime? Singing the national anthem. via @InkstoneNews

Well worth watching the video that caused her to be detained and lose her career. She doesn’t even like she’s disparaging the anthem. ?#世界最严的政治正确 https://t.co/Fr3RXygqFg

In 2014, a statement from the Party Central Committee and State Council forbade use of the anthem at weddings, funerals, and in entertainment or commercial settings. Xinhua reported that the edict “standardizes proper etiquette for the national anthem, which reflects national independence and liberation, a prosperous, strong country and the affluence of the people.” These rules were enshrined in a National Anthem Law last year, with penalties of up to 15 days’ detention introduced for “those who maliciously modify the lyrics, [or] play or sing the national anthem in a distorted or disrespectful way.” A subsequent amendment to the national Criminal Law increased the possible sentence to three years. Similar regulations govern use and abuse of the national flag, though Xi Jinping’s own violations have so far gone unpunished.

The Chinese anthem is also set to gain legislative protection in Hong Kong under a draft law that has been condemned as unconstitutional by the HK Journalists’ Association and derisively protested by activists. The draft has become emblematic of increasingly tight restrictions on expression in the territory, which were also embodied by the recent expulsion of Financial Times journalist Victor Mallett. From Maya Wang at Human Rights Watch in March:

If enacted, the bill will penalize anyone who “performs or sings” the anthem “in a distorted or derogatory manner,” or “publicly and willfully alters the lyrics or the score.” Schools will be required to teach students to sing and “understand the history and spirit” of the national anthem.

But what would constitute an “insult” to the song? Unnamed government sources say it will depend on the person’s “intent,” encouraging political interpretations by the authorities.

As with other vague bans on free speech, discussions about what is allowed have quickly brought out the absurdity of the bill. One Hong Kong newspaper tried to clarify the bill by positing different scenarios in a “question and answer” format: in one, the paper asks whether people at a restaurant could face prosecution if they fail to stand when the anthem is played on television. Citing “official sources,” the paper reassures those who do not stand because they are eating, but suggests that other gestures – such as flipping a middle finger – might not earn similar leniency.

[…] Hong Kong Chief Executive Carrie Lam has played down fears the bill could be politicized, saying it merely aims to encourage “respect” for the anthem. Yet she has not acknowledged citizens’ concerns about forcing their political loyalty to Beijing, or how mainland authorities’ frequently jail people for peaceful criticism. Enacting this law will merely remind Hong Kong people just how tenuous their rights to free speech are. [Source]