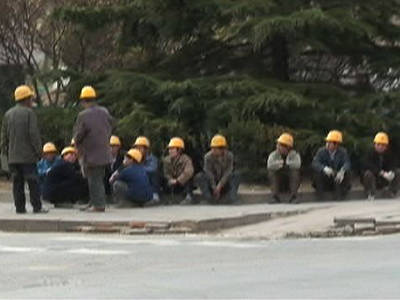 All websites: Regarding the suspected pneumoconiosis (black lung disease) patients from Hunan who have repeatedly visited the relevant authorities in Shenzhen to petition, all websites must not report, comment, or republish [this news]. (November 18, 2018) [Chinese]

On November 7, police in Shenzhen used pepper spray against a group of workers who were petitioning authorities to grant them compensation for terminal lung disease they contracted while working blasting rock in the 1990s. The group is part of a larger effort launched in 2009 to gain compensation and an apology from local authorities, whom they claim did not adequately inform them about the dangers of their work. Radio Free Asia reports:

Many were migrant workers from the central province of Hunan recruited to work as drillers and blasters, detonating explosives and using drills to cut shafts and passageways in rock, from the 1990s.

“We began coming out to Shenzhen … to work in the drilling and blasting industry 30 years ago, but the construction companies did not provide us with effective protective measures,” the protesters wrote in an open letter to the city government last May.

“The government did not fulfill its responsibility to effectively regulate the construction companies’ work safety conditions.”

The protesters say they weren’t informed of the severe occupational hazards that went with the job until they began getting sick and dying from silicosis years later. [Source]

Mimi Lau at the South China Morning Post reports on the protests:

According to protesters, who provided videos and photographs to support their claims of heavy-handed policing, more than 300 workers from Sangzhi and Leiyang in central Hunan province travelled to Shenzhen on Monday for the ninth time this year to petition authorities for work injury compensation and medical costs after contracting the lung condition, for which there is no cure.

They were representatives of more than 600 people who worked on construction sites across Shenzhen in the 1990s and 2000s.

One demonstrator – who suffers from advanced silicosis – said they marched to Shenzhen city government building on Wednesday afternoon, where they demanded to meet the mayor. They started a sit-in which ran into the evening, but a scuffle broke out about 8pm after a female protester tried to stop a security agent from filming her. [Source]

Workers toiling in Shenzhen’s building boom early this century have said they are “treated like ants…not humans.”

Read more about black lung disease in China, via CDT.