Translation: My Student Reported on Me! 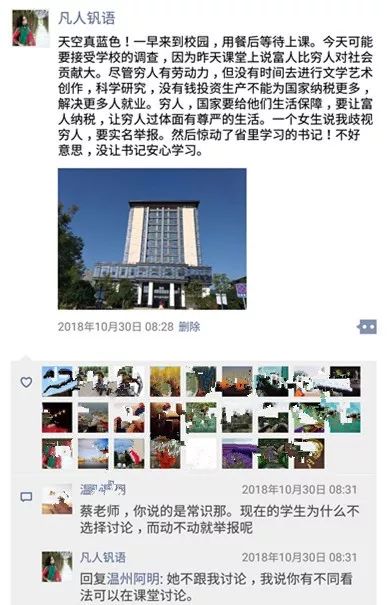 Amidst a tightening of ideological control on China’s campuses, there have been reports of schools encouraging students to report on teachers who express any ideological deviation. While the concept of students reporting on teachers is not a new one in Chinese society–and was carried to an extreme during the violence of the Cultural Revolution–the tightening of the political and academic environment under Xi Jinping has led to increase in reports of such behavior. On his blog, David Cowhig has translated an essay posted on WeChat under the handle Fanren Fanyu (凡人钒语), which provides a personal account of how students reported on a teacher for initiating a discussion on the contributions made to society by both rich and poor people.

A student reported me on Monday morning!

We were discussing in class whether rich people or poor people made greater contributions to society. One girl got very angry, and spoke up, saying that I was advocating discrimination against poor people and that she would report me! 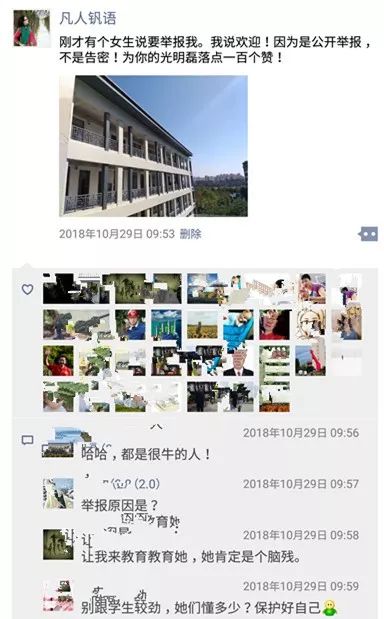 This semester, I taught “Practical Writing.” I made my “plan” for the chapter on “Business Writing” according to the objectives identified in that chapter. The first objective is to “strengthen the study of policy learning and build global awareness.”

I told the students that policy should be interpreted according to law and common sense. Sometimes some policies go against common sense. For example, the Cultural Revolution campaign to “Smash the Four Olds [old customs, cultures, habits, and ideas] and Establishing the Four News [new customs, new culture, new habits, new ideas]” was contrary to common sense, damaging both traditional culture and cultural relics.

The villagers in Zhuge Village, Lanxi, Zhejiang Province were very wise. They pasted mud on old buildings to cover up the fine wood carvings. After the reform and opening began, these exquisite wood carvings were uncovered. They preserved a valuable cultural heritage for humanity. There is a precious woodcut long couplet in the Liu Bowen Emperor Temple of Wencheng Nantian. The villagers feared that the couplet would be destroyed. So they painted revolutionary slogans on the back of the woodcut and rehung it. It was saved and now the town treasures it in the town temple.

Therefore, there are some things that are just common sense and don’t require an advanced education to make decisions about. Just as the question as to who contributes more to society, the poor or the rich, it is a question we can resolve through our own common sense.

“The poor are barely able to afford their own food and clothing and even sometimes rely on welfare from the state to survive. What about the rich? What do they contribute to society?” I asked the students.

“Do the rich contribute to society?” Some students said that they pay taxes. I said yes, this is just one part of their contribution. The rich can use their wealth to expand production and create more jobs for workers. When people’s material life is satisfied, they will have more time to pursue their hobbies and values. They get involved in and support things like scientific research, literary and artistic creation, engaging in philanthropy, building beautiful buildings, accumulating material and spiritual wealth for society. However, a civilized country must be kind to the poor. We must use public policies to provide welfare for the poor so that they will live in dignity.

I was being straightforward about my views. Suddenly, a girl stood up and said, “Teacher, you are advocating discrimination against poor people! I will make a public report about you.”

I said: “We can discuss different views. When I finish, you can talk about the contribution of the poor to society.” She blushes and says indignantly: “I don’t want to discuss this with you. You are advocating discrimination against poor people. I will make a public report about you!”

“Okay! Making a public report about people is your right. I give you fulsome praise for reporting on me by name! You are glorious and upright.” I gave her two thumbs up and praised her!

Some students report anonymously. I think of that as a secret report. In the university classroom, many problems and ideas can be discussed and argued about. Academic independence and freedom of thought will cultivate innovative talents. Having students act like spies does not foster a positive outlook.

Last year, students reported on me anonymously. In the classroom, I told students that they need to develop their capacity for independent thought. Don’t let anyone tell you that the wind is rain or you will suffer for it. I told them that during the Cultural Revolution there were many Red Guards younger than yourselves who died gloriously while they were still very young. Both fighting Red Guard factions declared that they were fighting for Chairman Mao and swore to fight to the death to defend Chairman Mao. After they died, they are neither heroes nor villains. Their parents are still asking the government to account for the deaths of their children.

Can you imagine how painful this has been for their families? The Cultural Revolution occurred largely due to a cult of personality. The Communist Party learned this lesson and wrote a prohibition against cult of personality into the Party Constitution. I was astonished to see some students blushing and saying: “Teacher, you are saying bad things about Chairman Mao!” I said, “I have reasons for this. The disaster caused by the decade of the Cultural Revolution to our country were discussed in the “Resolutions on Certain Historical Issues of the Party since the Founding of the People’s Republic of China.” The prohibition against cult of personality is stipulated in the current Party constitution.

I don’t hold anything against students who make reports. I don’t ask questions to find out who is reporting on me. The practice disgusts me. When as a class teacher working with students, I never relied on or used an informant. I often talk with students and learn from what they have to say. I listen to people with various opinions, and am always reading more books in order to expand my horizons, improve my mind and improve my knowledge. However, there will always students who cannot tolerate different views and thoughts. Although the Cultural Revolution took place over 50 years ago, the ideology of the Cultural Revolution is still out there and there is always the danger that it might recur.

That girl even made a report to express her dissatisfaction with me. But she was honest enough to do so openly so I much prefer her to those who report secretly. She may be concerned about the poor due to simple sympathy with people from her own class or out of a feeling of responsibility for the country and worry about the future of the nation. She may be afraid that teachers will say bad things and broadcast bad ideologies in the classroom that poison young people. Therefore, I did not feel any anger at all towards her but I do feel sad for her.

“What happened? Why have you been reported by your students?”

“I said in class, ‘let’s discuss whether the poor or the rich have contributed more to society.’”

The Party Secretary said that reports from all students who file a public report must be investigated.

The next day, many students were called in for a talk. Now many teachers in colleges and universities have been reported by students. Some had to move to a different position. Others were laid off or even fired from public employment. A lot of friends called me on WeChat asking me to be careful and be sure to protect myself. Teacher has become a high-risk occupation. As a teacher, one will always have some personal opinions and opinions when one is explaining something. If we just teach to the text, the students would complain that class is very boring. All textbooks need to be enriched with extracurricular content to make class more lively and interesting.

However, as to what should be said or should not be said, I don’t know where that invisible line really lies! [Source]

CDT made minor edits to the translation for clarity.