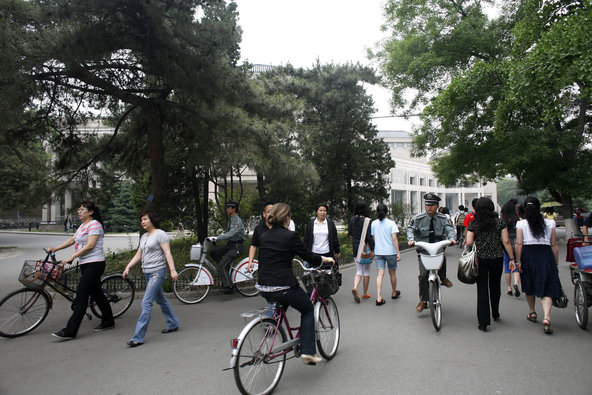 Between November 9 and 11, over a dozen student and labor activists, many of them former or current students at elite Chinese universities, were violently detained in several cities. The detentions, many of them ongoing, are part of a state crackdown on labor activism by students or graduates of elite Chinese universities. Peking University graduate and workers’ rights pioneer Sun Min was one of those detained, and CDT this week translated two profiles of her outlining her impact on the labor and feminist movements in China. An earlier round of detentions in August led to the disappearance of fellow PKU graduate Yue Xin, whose current whereabouts are also unknown.

Last week, Jasic Workers Solidarity Group posted an essay by PKU student Feng Junjie, in which the medical student describes his experience being roughed up by thugs on PKU campus on November 9. Feng also calls for campus security to be held accountable for their inaction. CDT has translated Feng’s account in full:

As Another Student Victim Who Was Beaten up on 1109 at PKU, I Choose to Stand Up

Before this happened, it felt impossible to think that violent incidents could occur on campus, let alone to me; but what was even more unfathomable was that the security guards at the school security office still deny it to this day, and haven’t lifted a finger to take action!

I am Feng Junjie, a 2015 entering undergraduate student at the School of Basic Medical Sciences at Peking University’s Health Science Center. I am another victim of the violence on campus. I want to tell you about my unimaginable encounter on the evening of November 9.

Although I had been away from the Peking University main campus for two years in order to prepare for exams as a hard-pressed medical student, I still chose to study at the main campus on the afternoon of November 9 due to its intense atmosphere. At about 10:30 in the evening, I was preparing to leave the school by car to return to the hospital where I was interning, but I did not expect this decision would bring about a sudden and unexpected disaster.

After I passed the centennial lecture hall, I felt something peculiar surrounding me on all sides. There were many darkly-clothed individuals loitering around the intersection between the centennial hall and the Guanghua School of Management. After I’d walked about seven or eight meters in front of two of them, they suddenly flew like arrows in a mad dash towards the Yannan canteen, then seized hold and shoved someone to the ground. In my moment of disorientation, two others had already rushed in front of me. They were wearing skin tight clothing and caps, moved swiftly, and had great strength. One person held down my shoulders while the other firmly grasped my hat and jerked it backwards, toppling me to the ground.

I was stunned by the sudden violence, but they still did not stop their savagery. As I fell to the ground, my glasses flew off my face. I felt several more people holding me down. Then I was able to react and yelled loudly: “What are you doing?! I’m getting hit! I’m getting hit! Help!” But these unknown individuals unleashed even more fierce violence against me.

“Hold him down, don’t let him call out!” a man deeply bellowed.

In the midst of the chaos, one hand covered my nose and mouth, while another seized hold of my throat. I felt like my neck was on the verge of snapping. Their fists fell like rain upon my forehead, my eyes, the corners of my mouth. I felt the blood rushing to my head, my whole head felt like it was about to burst; several feet forcibly kicked my thighs, which in a flash lost all sensation…

Their repeated blows made me even more angry. I continued to resist the pressure against my throat and used up all my strength to continue shouting for help. At this moment, I felt several more people rush up. They lifted me up together and were going to stuff me into a nearby car. I used my left hand to grab the car door with all my might. Who knows what they were intending to do with me once they got me in that car? But then a few more people rushed up and began pounding on my left hand. Finally, my last bit of strength was exhausted, and I had to let go. Wounds broke open on my left hand and shed blood.

After being shoved into the car, I was still firmly controlled. My head was pressed onto the seat, making it difficult to breathe. All I could feel was the swollen pain in my brain and the feeling that the sky and earth were spinning. I mustered all my strength to tell them to let go, but they only held me down more tightly, the suffering only intensified! I had no choice but to go limp. I asked for my glasses back, but they flatly denied me! I once again questioned who they were. But the driver said coldly: “Stop resisting, if you move we’ll hit you again!”

In the few minutes that I was in the car, all kinds of horrible imaginings welled up in my mind, and I gradually began to give up all hope. Maybe I would never get to see my parents again, go back to school, or continue my stressful yet stable life as a student!

But what both surprised and puzzled me was that the car hadn’t gone far, I’d only been under violent containment for two or three minutes before they opened the door, dragged me out, and heavily threw me to the ground! The car then swiftly drove south…

For a moment, I truly didn’t understand why someone could suffer such violent treatment on campus?

With great difficulty, I resisted the pain from my wounds and the anger in my heart and reported this to the police. After the case was filed, the police accompanied me to Haidian Hospital to examine my injuries. I had many contusions on my head, face, hands, and legs. I had difficulty walking, and dully ached all over. It unexpectedly took seven hours to transcribe my experience and undergo examinations. It was six in the morning by the time I returned to school.

I don’t know who these people really are, but I was not the only one injured—there were others who had been beaten. I later learned that Peking University graduates were violently kidnapped by these people! What power do they have that they openly dare to despise the law, arbitrarily commit violent acts, and beat and kidnap others! What makes me even more incensed is that these gangsters openly committed these acts on the Peking University campus!

What I’m even more unclear about is how they squarely marched into campus when school security guards strictly control vehicles entering and leaving campus. Especially given that after beating up Peking University students, this group of ten or more people made no secret of their exit from campus.

However, I believe that the one who is indulging and sheltering these gangsters’ behavior while shirking responsibility to do anything and even continuing to pressure students, is the Peking University Security Office!

On the evening of November 10th, classmate Yu Tianfu wrote of his own experiences in an article, and made a video to tell the students how he was beaten up.

On the 11th, I was shocked to hear that the school security department issued a statement, and even unconscionably asserted that the assaults did not involve teachers and students. Is that to say that the students who were beaten up mutilated themselves? Not only that, but classmate Yu, who bravely came forward to tell his story, has been unreachable for three days. His WeChat account has been shamelessly blocked, and now there is no news of him. Some students even said that he is now being held at the location where his hukou is registered!

I dare to ask the Security Department, for what reason, and based on what evidence, are you covering up the truth? With just a mere few lines in your statement, you deliberately distorted the truth and erased what had already happened.

Could it be that when a classmate’s safety is jeopardized, that this so-called “campus security,” designed to protect the safety of teachers and students, would issue a statement with no explanation, a completely insincere denial, and shirk responsibility?

Could it be that students who raise questions are bound to completely disappear from everyone’s vision?

Today, the men in black who freely beat us up won’t get the punishment they deserve. In the future, any classmate may arbitrarily be subject to this again. Today, the fact that we were beaten on the Peking University campus cannot be justified. In the future, any classmate who arbitrarily and unfairly encounters this could be slandered and falsified!

I hereto hope that the relevant leaders of Peking University will pay attention to and assist the public security organs to thoroughly investigate this violent campus incident!

I ask that the Peking University Security Department not only explain their inaction and suppression of classmates, but also apologize to the relevant victims, including me! […] [Chinese]