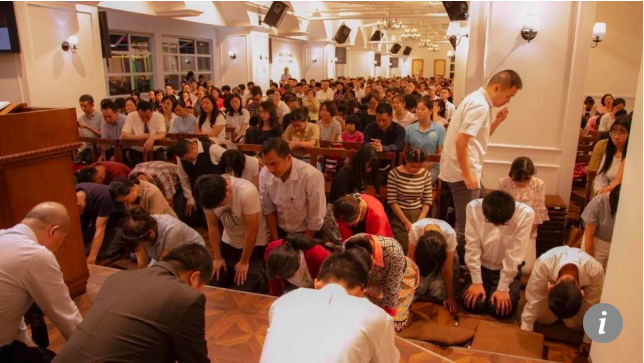 Pastor Wang Yi’s wife Jiang Rong, who is held under secret detention in an undisclosed location, has been accused of inciting subversion of state power days after authorities cracked down on the Early Rain Covenant Church in Chengdu, Sichuan. More than 100 church members including Jiang and her husband were taken into custody over the weekend in a city-wide raid against the renowned protestant house church. A censorship directive was issued following the arrests prohibiting websites from reporting the incident, which is the latest in a series of crackdowns on underground churches against a background of deepening religious persecution. Mimi Lau at South China Morning Post reports:

Jiang Rong was implicated along with her outspoken husband, who has been placed under criminal detention and is also accused of inciting subversion.

[…] It was not known what had happened to Jiang until Thursday, when congregants circulated a police notice stating she had been placed under “residential surveillance at a designated location” on Monday afternoon.

A lawyer who declined to be named said Jiang could be kept at the unspecified location for up to six months, and that the move appeared to be aimed at intimidation and deterring advocacy efforts on the case.

“Accusations can be made against pastor Wang Yi – after all, he’s the one at the lectern doing all the preaching. But his wife doesn’t hold any position in the church, nor has she made any public comments,” the lawyer said.

“There are no words to describe the absurdity of this situation … the handling of the case shows how furious the top party leadership is about the church.” [Source]

Following instructions Wang gave prior to his arrest, church members released an open letter he penned in September titled “My Declaration of Faithful Disobedience,” in which he explains how his disobedience is not a form of political activism and is distinct from civil disobedience.

Arrests are still ongoing and at least seven others have been placed under criminal detention along with Pastor Wang. From Wong Lok-to and Qiao Long at RFA:

An Early Rain church member said the church premises in Jiangxin Mansions on Chengdu’s Taisheng North Road were surrounded on Saturday night by several hundred people, including police, who then sealed off the premises.

“Over the past few days, starting last Saturday and continuing until this Tuesday, there have been several raids targeting the Early Rain Covenant Church in Chengdu,” the church member said. “It’s been really awful.”

“More than 100 people have been taken away, and they are still detaining people,” he said. “Pastor Wang has been detained, and I haven’t heard from him.”

[…] A church member surnamed Zheng said Wang is being held under criminal detention on suspicion of “running an illegal business” and “illegal publishing,” while some detainees are being held on suspicion of “picking quarrels and stirring up trouble.”

“Some people have returned home, although it’s not clear what their situation is, and they remain under surveillance,” she said. “All of the church leaders have been detained … only a few regular church members are left.” [Source]

Despite the crackdown, congregants are vowing to keep meeting for services. Mimi Lau reports in a separate article at South China Morning Post:

Zhang said members of Early Rain were in good spirits and would press ahead with gatherings.

“We will not forsake assemblies. I was frightened at first when it happened but have soon overcome the feeling as we are prepared [for persecution],” she said.

In a handwritten letter posted online, Li called on church leaders to take up pastoral work despite the crackdown.

“We are willing to have 200, 300 and even 500 of us locked up so that the whole world knows we are willing to be persecuted for our faith,” he said in the letter written as he evaded police.

He also called on church members to keep worshipping and meet outdoors if venues could not be rented, adding that the group would never give up on practising its faith publicly. [Source]