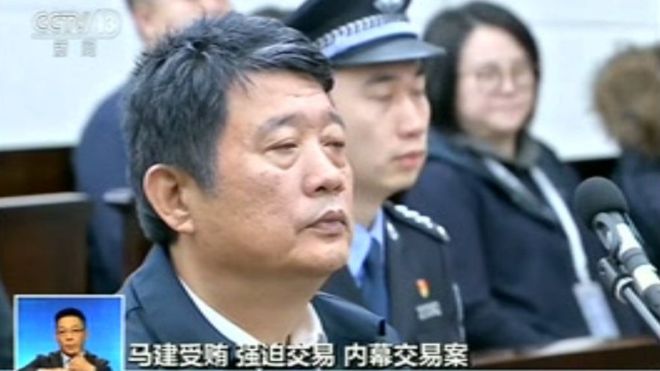 Ma Jian, China’s former vice minister of state security, has been sentenced to life in prison for corruption charges by a court in Dalian, Liaoning. Ma, who has ties to exiled tycoon Guo Wengui, was placed under investigation for corruption in 2015 and expelled from the Party in 2016. The BBC reports:

Ma Jian was vice-minister in the powerful ministry of state security, which oversees foreign and counterintelligence operations.

His case is linked to that of one of China’s most-wanted fugitives, exiled property tycoon Guo Wengui, who has published a series of allegations of corruptionamong top members of the Communist Party.

[…] More than one million officials have been punished in the anti-corruption drive started by Mr Xi when he took power in 2012, the government says. [Source]

Ma pleaded guilty and said he would not appeal the verdict. The court announced that his sentence was “light” due to his confession, regret, and return of bribes. At The New York Times, Javier C. Hernandez reports further on the relationship between Ma Jian and Guo Wengui:

[…A]nother part of Mr. Ma’s past that had drawn attention lately: his ties to Guo Wengui, the billionaire Chinese fugitive who has unleashed a barrage of embarrassing accusations against Communist Party leaders from his New York penthouse.

The court said that from 2008 to 2014, Mr. Ma colluded with Mr. Guo, a real estate tycoon who was among China’s richest men, using threats to force sales that benefited Mr. Guo’s businesses. Mr. Guo fled China in 2015.

[…] Since Mr. Guo began his attacks on the party last year, using social media to accuse officials of graft and other crimes, Beijing has worked tirelessly to discredit him.

Last year, a video confession by Mr. Ma surfaced online. In the video, Mr. Ma, shown in a black puffer jacket with his hands folded together, said he had accepted millions of dollars in gifts from Mr. Guo in exchange for favors.

“Guo Wengui, to ingratiate himself with me, to thank me, and to maintain his relationship with me, gave me a huge amount of benefits,” Mr. Ma said in the video. [Source]

More from the AP:

The court said in a statement online that Ma used his political power to aid the business operations of Guo Wengui, a real estate billionaire wanted by Chinese authorities. The New York-based Guo has published a slew of online videos in which he makes sensational allegations of corruption in the upper echelons of China’s ruling Communist Party.

Guo gained control of a national securities company after Ma sent letters addressed from the state security bureau to threaten and pressure individuals to hand over their shares to Guo. Separately, Ma also obtained insider information about the same company whose shares his relatives later purchased, resulting in profits of more than 49 million yuan ($7.2 million). [Source]

Read more on the Ma Jian corruption case, or on Guo Wengui, via CDT.