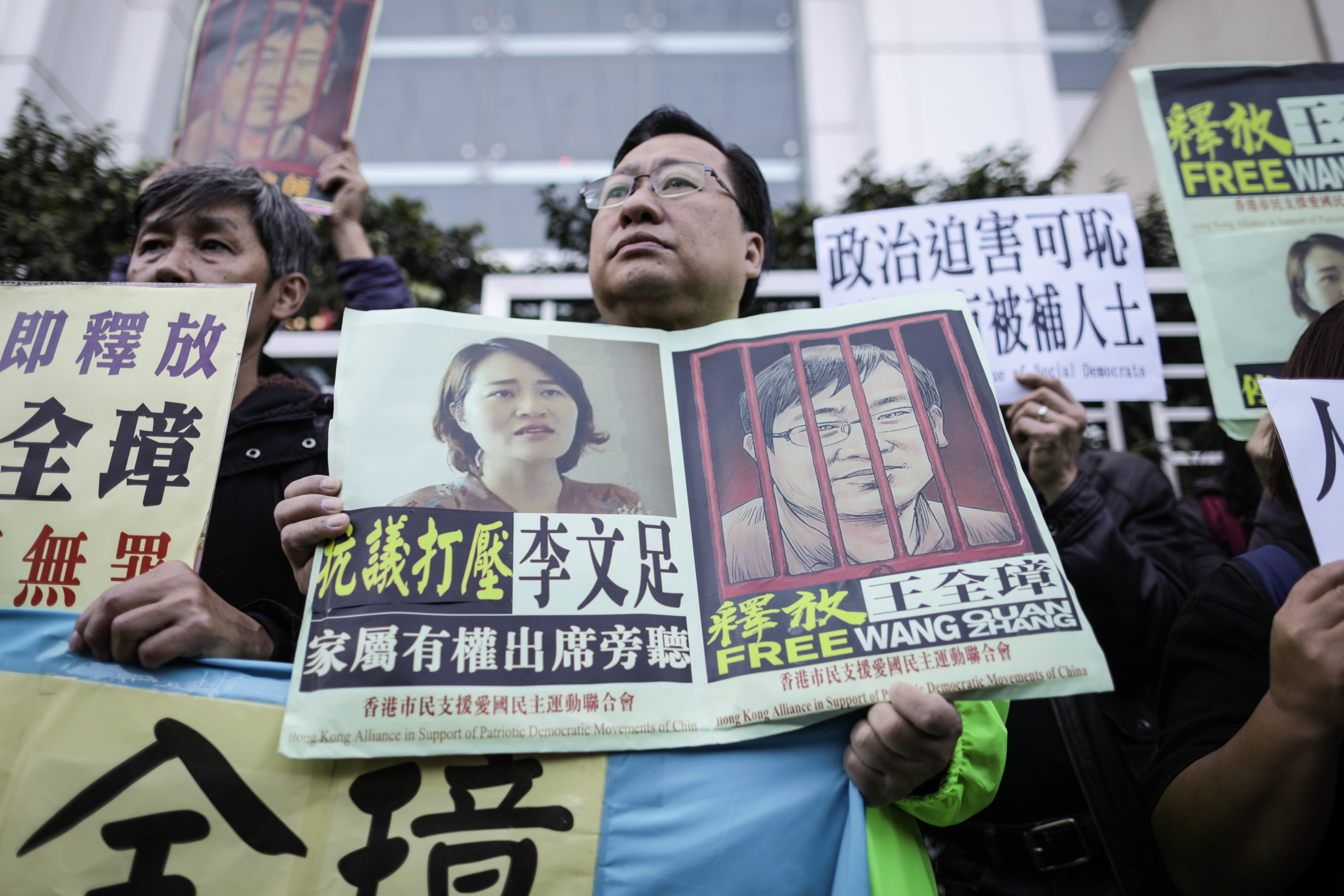 A court in Tianjin announced on Monday that prominent human rights lawyer Wang Quanzhang has been sentenced to four and a half years in prison for subversion of state power. The verdict came more than three years after Wang was detained in a country-wide crackdown on rights lawyers and activists. He was charged with state subversion in January 2016 and stood trial in a closed hearing this past December. Wang, who defended Falun Gong practitioners and victims of land seizures prior to his arrest, was the last of the detained lawyers to go on trial. Others had either been released or formally charged and tried. A censorship directive, translated by CDT, was issued prior to Wang’s sentencing to prohibit independent reporting on the case. Eva Xiao at Hong Kong Free Press reports:

Wang was “found guilty of subverting state power, sentenced to four years and six months in prison, and deprived of political rights for five years,” the Tianjin Second Intermediate People’s Court said in a statement.

After more than two years of being in legal limbo — detained without a trial date — Wang’s court hearing took place behind closed doors in Tianjin on December 26.

At the time, the court said the trial was closed to the public “due to the state secrets involved”.

“He should be released in a little over a year,” she wrote on Twitter. [Source]

Wang Quanzhang verdict is being delivered now in Tianjin. To prevent wife, supporters & diplomats from gathering outside the court, the court has not announced the date of the ruling to minimize foreign media attention. In #China laws are stage props in a very bad play. https://t.co/Zi5WcdksIS

A number of rights groups have denounced the verdict and demanded Wang’s release, with Amnesty International’s Doriane Lau calling the sentencing “a gross injustice.” From the Associated Press:

“It’s outrageous that Wang Quanzhang is being punished for peacefully standing up for human rights in China. He must be immediately and unconditionally released,” Lau said in an emailed statement.

Human Rights Watch said the sentence made a “mockery of the ‘rule of law’” being championed by the ruling Communist Party under President Xi Jinping.

“Authorities’ treatment of him … is the true metric of rule of law in China,” the group said in a statement sent to reporters.

[…] Trials for rights activists in China often draw out over years while the accused are held under harsh conditions that can endanger their health, including frequent accusations of torture, while routinely denied the right to hire their own legal representation and receive visits from family members. [Source]

Until his trial, Wang’s whereabouts remained unknown. Authorities even withheld information from his family who did not know whether he was alive until recently. Since the detention, Wang’s wife Li Wenzu has campaigned tirelessly for her husband’s release, at one point attempting to march 100 kilometers to the detention facility in Tianjin where he had been held. Authorities were sent to Li’s home on the day of Wang’s trial to prevent her from attending. From Radio Television Hong Kong:

Reacting to the news, Wang’s wife Li Wenzu said that the verdict shows that her husband has not given up on his principles despite the years of detention.

Li last year brought her husband’s plight to the media’s attention by marching from Beijing to a Tianjin jail where her husband was reportedly detained, but she was stopped by police before she reached her destination.

[…] Li said on Monday that the verdict is not the end of the matter and she believes her husband will launch an appeal.

She said that she is now worried about the health of her husband as he has been under detention for over three years.

Wang’s sister, Wang Quanxiu, told RTHK that she has not been able to stop crying over the heavy punishment handed down to her brother.

She said he hasn’t committed any crime and it is the authorities that have failed to uphold the rule of law. [Source]

“He has not committed any crimes, so there shouldn’t be a sentence,” Li Wenzu, wife of rights lawyer Wang Quanzhang told AFP after his sentencing. “I think the ones who are guilty are the judicial authorities, not him.”

#KeepInMind: we have never seen a single image of lawyer Wang Quanzhang. The Chinese govt showed the show trial images in Aug 2016; TV “confessions” of lawyer Wang Yu, Jiang Tianyong, Xie Yang; images of @tufuwugan trial. BUT WE HAVE NOT SEEN A SINGLE IMAGE OF #WangQuanzhang. https://t.co/wEPM4GCmhB

While #WangQuanzhang is the last of the original 709 lawyers to be sentenced, it is true we must keep in mind other rights lawyers who have been arbitrarily detained, especially one of Wang Quanzhang’s original defense lawyers #YuWensheng who has been missing for a year now. https://t.co/9GiPqnZV7y

Observers believe Wang’s sentence is meant to send a chilling message to the legal community. From BBC:

As the Party has been making clear in recent years, it sees concepts such as constitutionalism and an independent judicial system as dangerous Western ideals.

Michael Caster, researcher and author of The People’s Republic of the Disappeared, told the BBC that Wang’s case was “emblematic of Xi Jinping’s assault on the human rights and legal community”.

“The rights defence and broader civil society community in China is rightly outraged. For some time now they have rallied around Wang Quanzhang and his wife Li Wenzu as symbolic of both abuse and resistance under Xi Jinping,” he said after the sentencing.