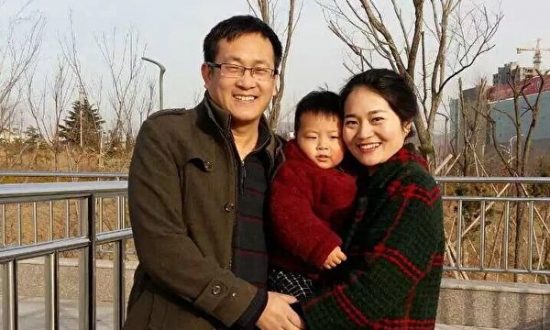 Rights lawyer Wang Quanzhang was put on trial in Tianjin on subversion charges Wednesday, after being held in incommunicado detention for almost three and a half years. No verdict has been announced. Wang was the last remaining lawyer to be held without trial as part of the 2015 “Black Friday” crackdown in which more than 100 lawyers and activists were detained. Wednesday’s trial was closed to the press and diplomats, and Wang’s wife Li Wenzu was prevented from attending. Wang, a former staff member of the now shuttered Fengrui Law Firm, handled many human rights cases, including those of Falun Gong practitioners, rural petitioners, and democracy advocates.

Secret Trial of lawyer #WangQuanzhang ended without announcing a verdict: Tianjin No. 2 Intermediate Court cited "state secret" for the close-door trial, said "verdict will be announced on a selected date." #FreeWangQuanzhang pic.twitter.com/IHRWEgO3zX

Investigators said he had “for a long time been influenced by infiltrating anti-China forces” and had been trained by overseas groups and accepted their funding, according to a copy of the indictment seen by Reuters.

[…] “There are serious human rights concerns about the way Wang Quanzhang’s case has been handled so far, including today’s closed-door proceedings – which we understand marked the first time he has seen a judge since he was detained more than three years ago,” U.N. human rights spokeswoman Ravina Shamdasani told Reuters.

Police turned non-Chinese journalists and Western diplomats away from the heavily guarded court in the northern port of Tianjin and denied entry to Wang’s supporters and family.

The court had decided, in accordance with the law, to hold a closed trial as the case involved state secrets, it said in a statement, adding that the verdict would be released at a later date. It gave no other details. [Source]

According to a text message conversation between Li and Liu Weiguo – the lawyer appointed by the government to represent Wang in court – and seen by the South China Morning Post, the defendant made it very clear that he would not require the services of a state-sponsored legal representative.

“I was sacked in the first minute, as the hearing began,” Liu said in a text. “I walked out of the courtroom … I don’t know what happened afterwards.”

Cheng Hai, who was Li’s choice to represent Wang but was prohibited by the authorities from doing so, said Liu’s dismissal was indicative of Wang’s mistrust of state-appointed lawyers.

“[Liu] probably failed to represent Wang’s legal rights properly in court but this could also be his [Wang’s] attempt at trying to get a better defence,” he said. [Source]

Supporters who protested Wang’s arrest were harassed or detained by security outside the court. From AFP:

Just before 10 am, Agence France-Presse journalists witnessed a man getting arrested after he protested outside the court in Tianjin, where Wang’s trial is believed to be underway.

“A refined scholar has been detained by you lot this way that even members of the public can’t see him,” shouted Yang Chunlin, a rights activist from Heilongjiang.

“This is fascist rule, it’s absurd. The Chinese people need to stop living in fear, we need to stand up to oppression and be brave.” Shortly after, several plainclothes officers set on Yang and bundled him into a waiting black SUV. [Source]

Heavy plainclothes security presence outside the courthouse this morning for Wang Quanzhang’s trial in Tianjin. One supporter, activist Yang Chunlin, taken away after shouting support for Wang and criticism of the govt – a rare sight on Chinese streets these days pic.twitter.com/lpp3tz3lsR

Police shove supporter Yang Chunlin into a black car after he shouted his support for Wang Quanzhang outside the Tianjin court #709王全璋案 pic.twitter.com/0474JP46wu

Wang’s wife, Li Wenzu, has consistently campaigned on his behalf and has herself been placed under house arrest. In November, she was honored with Sweden’s Edelstam Prize for her human rights work on behalf of her husband and other detained lawyers. Security officers prevented her from leaving her house to attend her husband’s trial. Lily Kuo reports for The Guardian:

On Wednesday, hours before the trial was to begin, Li walked down the seven flights of stairs of her apartment block in Beijing to find more than a dozen plainclothes police and four cars awaiting her outside. She had already been warned by public security agents not to attend her husband’s trial at a courthouse in the northern Chinese city of Tianjin.

After three years of protesting and calling for the release of her husband, on trial for subverting the state, a charge often used for dissidents, Li is used to the police restricting her movements.

“Every time it feels different. Today is Wang Quanzhang’s court hearing, which means there could be a verdict. So I am very worried about that as well as his health,” she said.

Li was quickly surrounded by a crowd of journalists and security agents, holding up their phones to film her. A man who refused to show his identification offered to drive her the 120km to Tianjin but she refused. As she tried to move, the crowd of security agents blocked her way. It was clear they were not going to let her leave. [Source]

Earlier this month, Li and the family members of other detained lawyers shaved their heads in a show of defiance against the arrests. Chris Buckley of The New York Times interviewed Li about the trial:

“This whole process has been illegal, so how could I expect an open and fair trial?” Mr. Wang’s wife, Li Wenzu, said in a telephone interview before the hearing. “But my demand is still that he be freed as not guilty, because that’s what he is.”

[…] In the face of official pressure and rebuffs, Ms. Li and the families of other detained lawyers coalesced into a determined and creative resistance.

They have protested using red buckets, attempted walking to the detention center where Mr. Wang was held, and this month they shaved their heads to protest what they said was judges’ failure to enforce Mr. Wang’s rights under Chinese law. (The Mandarin Chinese word for hair (fa) sounds similar to the word for law.)

“In Chinese, having no hair sounds like having no law,” Ms. Li said. “We meant that we can do without our hair, but we can’t do without law.” [Source]

AP’s Gerry Shih notes the collateral damage from a case like Wang’s, where many of his colleagues and associates have also been detained:

Wang’s indictment accused him of, among other offenses, working with a foreign NGO, China Aid. The co-founder of China Aid, Peter Dahlin, had himself been detained and deported from China in 2016. Dahlin issued a statement on the charges against Wang:

[…] The very mission of ‘China Action’ was to strengthen enforcement of China’s law,s the very opposite of claims that it was in any way or form working to violate or break Chinese law. There is no legal basis for the prosecution of Wang Quanzhang as presented by the prosecutor, and the court should, without delay, have Wang Quanzhang set free. Likewise, the prosecution of Wang for participating in the now famous Jiansanjiang case have no merit in law, and any legal violations were perpetrated by Jiansanjiang police, not any of the many lawyers involved.

The evidence, as indicated by the prosecutor – according to an older, sealed, indictment, includes testimony from several other people, all but one which was effectively disappeared during their interrogations, placed into ‘residential surveillance at a designated location’ (RSDL). The indictment names Wang Yu, Chen Songzhu, Xing Jianshen and myself, Peter Dahlin. All were held in solitary confinement, without access to a lawyer, incommunicado, and as testimony released before has shown in some of those cases, some received physical and mental torture. Any ‘evidence’ collected through such interrogations should be inadmissible, as per Chinese law. […] [Source]

A statement from Amnesty International called Wang’s trial “a cruel charade,” while the Hong Kong Bar Association also called for his release.

The timing of Wang’s trial also brought to mind similar high-profile sentencings around the Christmas season, when many foreign reporters and diplomats are not available to cover them. In 2017, activist Wu Gan was sentenced to eight years in prison on December 26, while in 2009, late Nobel laureate Liu Xiaobo was sentenced to 11 years on Christmas eve. Last year, Sarah Cook of Freedom House wrote about China’s “stealthy holiday crackdowns.” At her China Law and Policy blog, Elizabeth Lynch writes about why the timing of Wang’s trial may portend a harsh sentence:

The Chinese government chose the day after Christmas for the trial of human rights attorney Wang Quanzhang likely because it plans to give a harsh sentence. https://t.co/gIStOgUwfO

Make no mistake, the Chinese government’s choice of the day after Christmas for Wang’s trial was intentional. And does not bode well for Wang. Knowing that much of the Western world shuts down between Christmas and New Year’s, the Chinese government has used that time to sentence some of its most famous advocates to harsh – and unjustified – prison sentences. As RFI has pointed out, Nobel Laureate Liu Xiaobo, who eventually died in a Chinese prison, was sentenced to 11 years on Christmas Day 2009. And on December 26 of last year, human rights advocate Wu Gan, another victim of the Chinese government’s 2015 crackdown, was given an eight-year sentence.

For Wednesday, expect another severe sentence for Wang Quanzhang who has been charged with the serious crime of subverting state power. Not only has Wang refused to “confess” in exchange for leniency and agreeably participate in a show trial, the Chinese government has vilified Wang by name in the press, including naming him as a ringleader. It also has alleged that because of the alleged influence of “foreign forces,” specifically the use of foreign NGO funds, these lawyers, including Wang, are national security risks. And don’t expect the passage of time to soften the government’s view of Wang, especially as China’s economy slows down, threatening the current regime’s stability and power. [Source]

You are China and want to hide something from the western media. What would be the best date? Maybe early morning on the day after Christmas Day?https://t.co/dzbk1PDNuM
Just as @joannachiu & many other #China watchers predicted.

Though TBH – just makes us want to cover it more.

As Reuters’ Christian Shepherd points out, when media organizations and embassies are short-staffed at holidays, the lower-profile cases get even less attention than Wang’s:

Journos and diplomats might be shrewd enough to catch the main Christmas-time trial, but in reality the rights stories happening in China today are a hell of a lot to try and cover when you are short staffed and editors are overworked. https://t.co/IChcp3HE0M