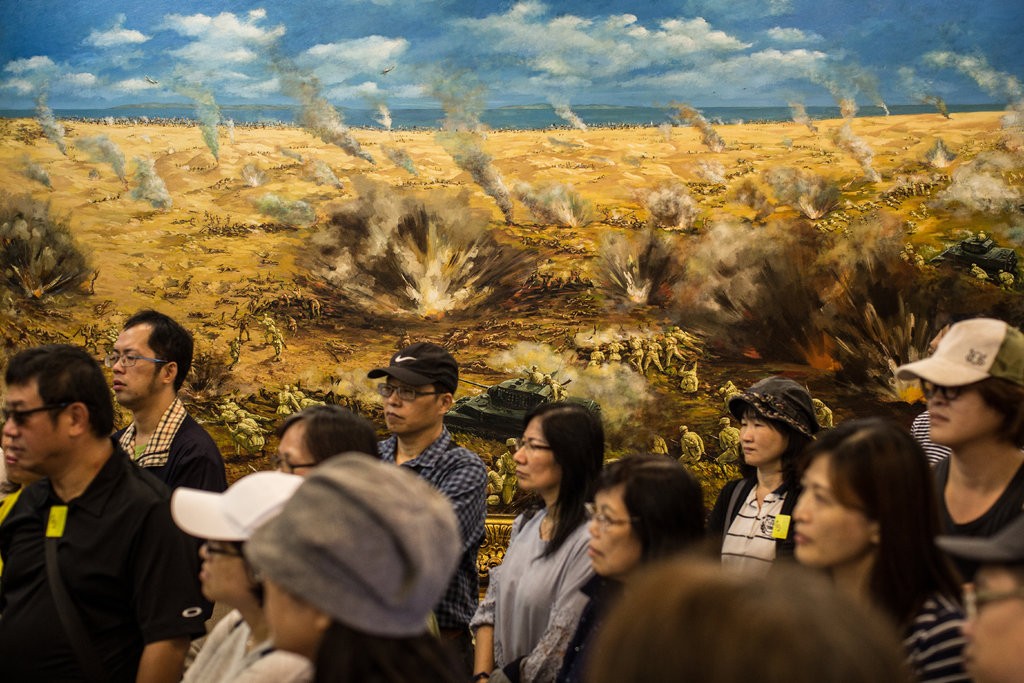 In a major address marking the 40th anniversary of the CCP’s first Taiwan policy statement, President Xi Jinping said on Wednesday that China will strive for peaceful “reunification” with Taiwan under the “one country, two systems” model, the same model currently governing Hong Kong, but warned that it reserves the right to use force to bring the self-ruled island under control if necessary. Chris Buckley and Chris Horton at The New York Times report:

“The country is growing strong, the nation is rejuvenating and unification between the two sides of the strait is the great trend of history,” Mr. Xi told officials, military officers and guests in the Great Hall of the People in central Beijing.

China would respect the Taiwanese people’s religious and legal freedoms in a unified “one country, two systems” framework, Mr. Xi said. But he warned that the profound political differences between Taiwan, a vibrant democracy, and China, a highly authoritarian government, were no excuse to reject unification.

“Different systems are not an obstacle to unification, and even less are they an excuse for separatism,” Mr. Xi said. “The private property, religious beliefs and legitimate rights and interests of Taiwanese compatriots will be fully assured.”

Mr. Xi also accompanied his offer of talks with a warning — one implicitly also aimed at the United States, which provides Taiwan with military equipment and the possibility of support in a crisis.

“We make no promise to abandon the use of force, and retain the option of taking all necessary measures,” Mr. Xi said in a section of the speech that drew rousing applause. Those options, he said, could be used against “intervention by external forces.” [Source]

Cross-strait relations have been strained since the 2016 election of Tsai Ing-wen from the pro-independence Democratic Progressive Party. China suspended all diplomatic communications with Taiwan in June 2016 after President Tsai refused to fully recognize the “one China” principle. Beijing has subsequently ramped up pressure to isolate Taiwan diplomatically. After El Salvador severed ties with Taiwan last August, the island nation now has formal relations with only seventeen countries, most from Central America and the Pacific.

President Tsai rejected Xi’s proposal and said in response that Taiwan’s people would never give up their democratic freedoms. Although Xi’s New Year speech comes on the heels of a major electoral setback for Tsai and her Democratic Progressive Party, Tsai warned against interpreting this as a rejection of self-rule. From Gavin Fernando and AFP:

“Democratic values are cherished by the Taiwanese people; it’s their way of life,” Ms Tsai told reporters in a press conference arranged in response to Mr Xi’s speech.

She also accused Beijing of provocations that strained people’s “emotional connection” to the mainland such as “buying off” Taiwan’s few diplomatic allies and increased military drills near the island.

“If the Chinese Government cannot treat its own people kindly, cannot guarantee human rights and will not let its own people vote … then Taiwanese will look at China’s intent with suspicion,” it said.

Though Mr Xi’s speech takes a strong stance against Taiwanese separatists and pushes for reunification, it is aimed mostly at domestic audiences, analysts say.

“It’s rather empty and doesn’t have any new points except that cross-strait unification would not affect the interests of other countries,” said Fan Shih-ping, political analyst at National Taiwan Normal University, adding that Mr Xi’s words may also be intended for the US. [Source]

As president of the Republic of China, I must stress that we’ve never accepted the “1992 Consensus,” & the “four musts” are crucial for positive cross-strait developments. I call on #China to bravely take steps towards democracy, so they can truly understand the people of #Taiwan pic.twitter.com/Wvgiy44Oc8

Taiwan President Tsai’s New Year address: https://t.co/V3zmIKIjGx. Four musts. China must 1) face the reality of the existence of the Republic of China (Taiwan); 2) it must respect the commitment of the 23 million people of Taiwan to freedom and democracy;

“We are willing to sit down and talk but as a democratic nation, all political negotiations relating to cross-strait relations must be undertaken with the authorization and supervision of the people of Taiwan and must proceed under the government-to-government model.”

China’s “one country, two systems” offer is unlikely to find widespread support in Taiwan. Instead, Xi’s promise of autonomy and an independent system of governance under that model is expected to be met with distrust by Taiwanese who have closely watched increasing attacks on Hong Kong’s freedoms. The New York Times’ Chris Buckley and Chris Horton report in a separate article:

[…N]either the threat nor the promised reward seemed likely to sharply weaken Taiwanese opposition to China’s demands, said Jean-Pierre Cabestan, a professor of political science at the Hong Kong Baptist University who studies relations between China and Taiwan.

“Xi Jinping’s approach is to use a bigger stick and to make the carrot sweeter,” he said in a telephone interview. But having seen Hong Kong’s autonomy and freedoms squeezed by Beijing in recent years, many Taiwanese people were likely to be suspicious of Mr. Xi’s offers, he said.

[…] Virtually no section of the electorate in Taiwan would find “one country, two systems” an attractive goal, said Jonathan Sullivan, an associate professor at the University of Nottingham in Britain who studies the island’s politics. “Taiwan is not a colony à la Hong Kong, and it has everything to lose and nothing to gain from agreeing to it,” Professor Sullivan said.

Even so, Mr. Xi had political motives to show that he was working to absorb Taiwan, Professor Sullivan said. “Having unification as a national aspiration is incredibly useful for the Chinese Communist Party, which stakes its legitimacy on economic growth and nationalism,” he said. “The former is becoming more difficult to deliver, and so the latter becomes more important.” [Source]

Incredulous that Xi still trying to flog 一國兩制, which has long been dead as a dodo in Taiwan

Multiple references to One Country, Two Systems in intro to Xi Jinping’s speech on Taiwan today. Can’t imagine too many people in Taiwan are looking at Hong Kong with envy.

Brings to mind a photo I took in Hong Kong during the Umbrella movement that includes a banner reading (in English) “Taiwan Beware!” and (in characters) “Today Hong Kong, Tomorrow Taiwan” (It appears in “Hong Kong Visions,” a 2014 @LAReviewofBooks essay https://t.co/ogNgHYIm29 ) https://t.co/zVqBh0dZip

First, the people of Taiwan have worked long and hard to achieve a democratic political system on their island. They value their own Taiwanese identity, sovereignty, and democracy. They don’t want to give that up in order to become part of a repressive and authoritarian China.

[… A]lmost no one in Taiwan is waiting for any integration with China, or willing to give up Taiwan’s freedom, democracy, and sovereignty. People simply want to live in peace with their giant neighbor, and at the same time gain more international space as a member of the international family of nations.

Second, Xi’s promises of “one country, two systems” are rejected by an overwhelming majority of people in Taiwan. The Taiwanese can see what is happening with freedoms in Hong Kong, and the nominally autonomous regions of Xinjiang and Tibet, which were given similar promises. Continuing to hold this up as a model for Taiwan increasingly lacks credibility, if it ever had any credibility to the Taiwanese.

And third, peace and stability in the Taiwan Strait is not an “internal affair of China”: it is a core interest of the United States, which values Taiwan as a vibrant democracy, and as a responsible stakeholder in the international community. Again, according to the 1979 Taiwan Relations Act, the United States insists that Taiwan’s future be determined peacefully with the consent of the people in Taiwan, and rightly so. [Source]

Meanwhile in Hong Kong, thousands of demonstrators took to the streets on Tuesday to protest the Chinese government’s clampdown on the city’s freedoms. From Reuters:

“Looking back at the year that passed, it was a very bad year … The rule of law in Hong Kong is falling backwards,” said Jimmy Sham, one of the organizers.

Organizers said the march drew 5,500 people, revised down from an earlier estimate of 5,800, while police said 3,200 people were on the streets at the march’s peak.

“I’m afraid the pressure will continue,” said Joseph Cheng, a veteran rights campaigner and retired professor who was raising money for a “justice” fund for activists facing hefty legal fees for several trials.

“We’re going to face a few difficult years, but we must stand firm … Unlike in mainland China, at least we can still protest.” [Source]

At Inkstone, Sum Lok-kei looks at four potential flashpoints for Hong Kong in the year ahead:

1. National anthem law
The controversial National Anthem Bill is set to be presented to lawmakers by the Hong Kong government early this year.

[…] Pro-democracy politicians have voiced concern that the law could restrict freedom of speech in Hong Kong, but it remains unclear if they will protest during legislative meetings to delay the passage of the bill.

The islands are expected to house more than a million people and could take decades to finish. The proposal has been criticized for its potentially high cost and environmental impact. [Source]