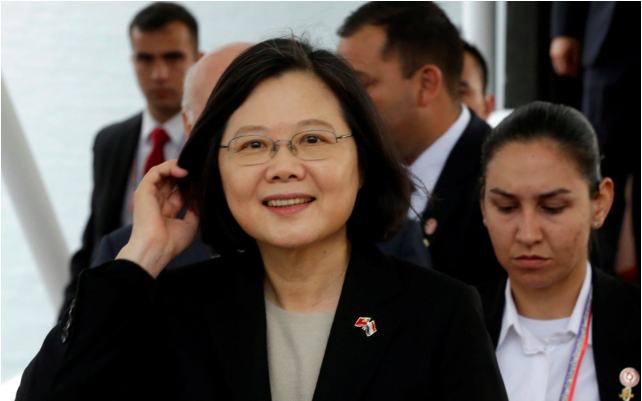 Taiwanese President Tsai Ing-wen made a brief transit in the United States over the weekend, stopping in Los Angeles and Houston en route to South America for a tour of Taiwan’s few remaining diplomatic allies Paraguay and Belize. While in the U.S., Tsai met with lawmakers in Los Angeles and paid an official visit to NASA Space Center in Houston, a move that is expected to provoke rebuke from Beijing while also signalling growing ties between Taipei and Washington. Nicola Smith at The Telegraph reports:

The trip to the Johnson Space Centre in Texas marks the first time a sitting leader from the self-ruling island has entered a US federal building in an official capacity, although her presence in Houston and in Los Angeles a week earlier were only brief stopovers en route to Paraguay and Belize.

Ms Tsai’s transit is the first stopover for the Taiwanese president since the US Congress unanimously passed the Taiwan Travel Act earlier this year, allowing US government figures up to cabinet-level security officials to travel to the island and high-level officials from Taiwan to enter the US.

Previously US policy did not permit bilateral visits by Cabinet-level officials. But behind-the-scenes, democratic Taiwan has long had influential allies in Washington’s corridors of power, with high profile legislators giving a nod to its strategic importance to America’s interests in the Pacific region.

[…] President Tsai also took to Twitter to express her gratitude. “Before we take off, I want to thank everyone involved for making my #Houston stopover a wonderful one filled with good memories. My administration will continue strengthening every aspect of #Taiwan-US relations. Until next time!” [Source]

China has pursued a more hostile policy stance towards Taiwan since the 2016 election of Tsai Ing-wen from the pro-independence Democratic Progressive Party. China suspended all diplomatic communications with Taiwan in June 2016 after President Tsai refused to fully recognize the “one China” principle. Beijing has subsequently ramped up pressure on Taiwan with targeted military exercises and other provocative acts designed to both intimidate and stave off external intervention. Ongoing tensions between China and the United States has some worried that Taiwan may become “a bargaining chip” in U.S. negotiations with Beijing.

A popular Taiwanese bakery chain has been caught in a diplomatic row over Tsai’s visit, after one LA branch of 85C Degrees Bakery Cafe gave the president a coffee and a warm welcome during her stop over on Sunday, prompting backlash from both Chinese and Taiwanese customers. Lily Kuo at The Guardian reports:

After Tsai’s visit to a Los Angeles branch of the bakery last weekend, Chinese netizens called for a boycott of the company’s more than 600 branches in China.

To stem the anger, 85 Degrees posted a message on the Chinese microblog Weibo, pledging its “firm support” of the 1992 consensus, a nominal agreement that Taiwan and China are part of “one China” and opposition to any “actions and opinions that separate” those on either side of the strait.

That statement, however, prompted anger in Taiwan. A politician from Tsai’s party suggested the bakery change its name to 92 Degrees to reflect its political leanings. Internet users criticised the company for folding to China. “Boycott! Boycott!” one wrote on PTT, a discussion bulletin board in Taiwan. “Seems this company should go back to China,” another wrote.

Nor did the bakery’s statement quell criticism in China. Listings for the bakery were no longer available on delivery apps like Meituan-Dianping and Ele.me. Weibo users posted images of the company’s website where China is listed as part of its overseas footprint. The company’s Chinese website, which now says it is “under construction,” has reportedly been hacked, according to Taiwan’s Central News Agency.  [Source]

The firm lost $120 million in market value after its stock plummeted in response to calls from both sides of the Taiwan Strait to boycott the bakery chain. The Taiwanese franchise is one of several companies now caught in the crossfire as relations between China and Taiwan worsen. With Beijing quick to condemn any move seen as endorsing Taiwan’s sovereignty, a number of foreign companies have been targeted for listing Taiwan separately from China. Four major U.S. airlines and several hotels were asked by Chinese officials to label the island country as part of China on their websites. From BBC:

Earlier this year US clothing company Gap apologised for selling T-shirts featuring a map of China that did not show Taiwan and other disputed territories claimed by China.

Japanese retail chain Muji was recently fined in China for listing Taiwan as a country on some of its packaging.

And over the past few months, Beijing has targeted Western firms – particularly hotels and airlines – to change their websites to show Taiwan as part of China and not a separate entity.

So on many airlines, where you previously would have booked a trip to “Taipei, Taiwan” you will now be booking for “Taipei, China”.

In January, the website of Marriott Hotels was shut down in China because it listed Taiwan as a separate country. [Source]

A hotel in Taiwan has terminated its contract with Marriott after the U.S. hotel group caved in to pressure from the Chinese government to list Taiwan as part of China. From AFP:

After the Chinese government shut down Marriott’s local website for a week, the hotel chain apologised and changed the listing to “Taiwan, China.”

But the Four Points by Sheraton in Zhonghe, a district of the capital Taipei, announced — in a front page advertisement in local newspaper the Liberty Times — it will terminate its franchise agreement with the parent group.

“We are sternly protesting against Marriott International unilaterally listing our hotel as ‘Taiwan, China'” on the simplified Chinese version of a booking website for members, the advert read, adding it would “dissolve” its contract.

Simplified Chinese is used in mainland China. A more complicated traditional version is used in Taiwan and Hong Kong, and on that version of the website the island is still listed as “Taiwan”. [Source]

In April, the Man Booker Prize changed the nationality of Taiwanese author Wu Ming-Yi displayed on its website from Taiwan to Taiwan, China after giving in to pressure from Beijing. Elsewhere, Reuters reports that police detained an 18-year-old man in the city of Ma’anshan last Friday for asking on social media what law prevented Taiwan from being called a country.

Meanwhile, news came on Monday as President Tsai wrapped up her trip to Latin America that El Salvador has severed diplomatic ties with Taiwan and established ties with China, making it the fifth country to switch recognition to Beijing since Tsai was elected to office. Panama broke ties with the Taiwanese government in 2017, the Dominican Republic followed in May 2018, and Burkina Faso did so as well in the weeks immediately after. Yimou Lee and Philip Wen at Reuters report:

El Salvador’s president, Salvador Sanchez Ceren, announced in a nationally televised speech that his government had broken off diplomatic relations with Taiwan and instead established ties with China.

Sanchez Ceren said the central American country, which built ties with the Republic of China government in 1933, would see “great benefits” and “extraordinary opportunities” in the new relationship with Beijing.

[…] “We are convinced this is a step in the right direction that corresponds to the principles of international law of international relations and the inevitable trends of our time,” Sanchez Ceren said.

In Beijing, Castaneda said it was a strategic decision his government made to “create conditions to change the historical standing of our country and to really elevate the livelihood of our people”.

Taiwan has accused China of luring its friends away with offers of generous aid packages. China denies that. [Source]

Although Tsai vowed on Tuesday to fight China’s effort to obstruct any acknowledgment of Taiwanese sovereignty, Beijing’s sustained efforts to isolate Taiwan diplomatically is paying off as Taiwan now has formal relations with only seventeen countries, most from Central America and the Pacific. The only exception to this trend is the establishment of an unofficial U.S. embassy in Taipei over the summer, which quietly signalled American support for the island nation.

Taiwan’s Foreign Minister Joseph Wu told reporters that El Salvador had asked Taiwan for loans before the two sides severed ties, suggesting that the lure of Chinese financial aid and investment played a role in the former’s decision to break relations. From Chris Horton at The New York Times:

In Central and South America — as in other regions — China is building ties partly through financing infrastructure projects under its Belt and Road Initiative, which is increasingly seen as loading poorer countries with debt they cannot repay.

Mr. Wu denounced Chinese tactics of using project financing to gain allies and said Taiwan was unwilling and unable to do the same.

“It is irresponsible to engage in financial aid diplomacy or compete with China in cash,” Mr. Wu said.

[…] “China’s rude and unreasonable actions are not those of a responsible country, and they will have a seriously negative influence on cross-strait relations,” Taiwan’s foreign ministry said in a statement. [Source]

El Salvador has since denied having sought large sums from Taiwan before making the decision to switch recognition. From Marcos Aleman at the AP:

In an interview with state television, presidential spokesman Roberto Lorenzana called Taiwan’s allegations “base” and “totally false,” noting that other countries have opted to have diplomatic and commercial relations with Beijing.

“We cannot turn our back on the world, ignore that China is the second largest power in the world and the leading export economy on the planet,” Lorenzana said. “It is key for our country.”

“The position from Taiwan is that the government of the FMLN (Sanchez Ceren’s political party) asked it for money to finance the campaign in 2019,” said lawmaker Margarita Escobar of the conservative Arena party. “That is called selling sovereignty and allowing another state to intervene in the internal affairs of El Salvador.”

“I do not support this erroneous decision,” said Guillermo Gallegos of the Grand Alliance for National Unity. “I would qualify it as sad and regrettable.” [Source]