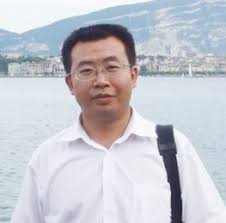 Lawyer Jiang Tianyong has disappeared into apparent police custody after being released upon the completion of this two-year sentence for “inciting subversion of state power.” Supporters and family members who traveled to the prison in Henan province to greet him upon his release never had a chance to see him. Associated Press reports:

His supporters say police outside his jail had told them he had been “taken away”, but did not specify by who.

[…] [Jiang’s U.S.-based wife] Jin [Bianling] said Jiang’s sister visited him earlier this month and reported that he was in poor health. His skin tone was darker, he appeared gaunt, and his lips were cracked, Jiang’s sister told Jin. He requested that his sister pick him on his release date and bring him to their ancestral home in Henan’s Luoshan county.

On Tuesday, however, state security agents visited Jiang’s parents and said he would not be permitted to return home, and would instead be sent to Zhengzhou, Henan’s capital, where the government would determine his housing and employment.

The next day, state security agents said they would escort Jiang’s sister and father to the jailhouse to meet him upon his release. The two have since been unreachable, Jin said, with their cellphones shut off despite a prior promise to call Jiang’s mother when they arrived at the jail. [Source]

Prior to his release, authorities had informed Jiang’s family that he would be taken to Zhengzhou upon his release. RFA reports:

State security police called on Jiang’s family members in recent days to inform them that the plan had changed, and that he wouldn’t be allowed back home on his release, Jin said.

“[They] said that they would be taking him instead to the provincial capital Zhengzhou, where the authorities would find him a place to live and a job, because Jiang was … born in Henan and his registration is there,” Jin said.

His family had said earlier they would travel to the jail to meet him on his release, and feared he would taken away before they could see him.

The state security police had told them that they could still travel to the jail to see him before being taken back to their hometown of Xinyang under police escort, Jin said. [Source]

In recent years, Chinese authorities have increasingly used what legal scholar Jerome Cohen calls a “non-release release,” when a prisoner is formally released from prison but immediately put under other forms of official surveillance or control.

.@709wangqiaoling received confirmation at the entrance of the prison that #JiangTianyong has been taken away. No idea where he’s taken to. He’s supposed to be released from prison today. His father and younger sister have also gone missing. https://t.co/CgM0rJBI3Q

709 wives @709wangqiaoling & Yuan Shanshan travelled to Henan to meet Jiang Tianyong outside prison gates upon his release, but he never came out, told he's aready been taken away. Soon more police surround prison area where supporters have gathered to greet him https://t.co/BRAQEqga88

Jiang had worked for many years as a lawyer defending a number of sensitive political cases including those of rights activist Chen Guangcheng and followers of the banned Falun Gong spiritual practice. Following a widespread crackdown on rights lawyers and activists in the summer of 2015, known as Black Friday, Jiang had defended and consulted several of the more than 300 detained. He was detained himself in November 2016 after visiting the family of lawyer Xie Yang, who had been arrested as part of the crackdown before being tried and then unexpectedly released. While in detention, Jiang was publicly accused of helping Xie fabricate accounts of police torture, and appeared in a televised confession, which was widely presumed to be coerced.

Last month, lawyer Wang Quanzhang was sentenced to four and a half years in prison on subversion charges, following a closed trial in December. He had been the last remaining lawyer from the 2015 crackdown to be held without trial. Read more about the Black Friday crackdown and Jiang Tianyong, via CDT.