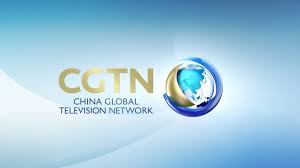 Amid growing concerns over an expanding influence campaign being waged by Beijing through the global arms of state media outlets, the U.S. Department of Justice last year requested Xinhua and CGTN, the international branch of state broadcaster CCTV, to register as foreign agents under the Foreign Agents Registration Act. Last month, CGTN submitted a filing, which declared it maintained “editorial independence from any state direction or control.” For The New York Times, Paul Mozur examines these claims and talks with CGTN employees in Washington about their relationship with Beijing:

Based in a glassy office building four blocks from the White House, CGTN America employs about 180 journalists — many of them Americans — devoted to covering the United States. It broadcasts seven hours of programming a day through cable and satellite providers like AT&T and Comcast. Its employees cover a wide variety of topics, from news to features to business, and occasionally win awards for their coverage.

[…] The news organization “collaborates with the security and police organs to extract forced confessions from prisoners under extreme conditions of duress,” [Peter] Humphrey said, adding that the confession was packaged to “distort reality, intrude on privacy and fairness, and humiliate me.”

Chinese leaders get different treatment, said three current or former employees. During a 2014 visit by Mr. Xi to Greece, a clip that showed him getting off the plane with unruly hair was eradicated from broadcasts, one current employee said. [Source]

Humphrey is a British corporate investigator who spent almost two years in Chinese prison on charges of illegally obtaining and selling personal data. Humphrey’s “confession” had been broadcast on CGTN; before it was filmed, Humphrey claimed he was “drugged, chained to a chair, locked in a cage and then made to read out a statement written by the police in front of the cameras.” Such coerced and televised confessions have in recent years become a routine part of high-profile political cases. Humphrey is now leading an effort to get licenses for CCTV revoked in the U.K. Al Jazeera recently produced a video report on his campaign:

Some former detainees are now speaking up. They say their confessions were extracted under duress and that law enforcement officials dictated what they could or could not say.

These accusations come to light amid an ambitious expansion plan by CGTN, the international arm of China’s state broadcaster, CCTV. A global recruitment drive is under way, and a new European hub is set to open in London.

But there are now calls for the UK’s media watchdog to refuse the Chinese broadcaster’s request for a license because activists say it has collaborated with Chinese authorities to broadcast forced confessions. [Source]

On Twitter, Paul Mozur provides more details about his report on CGTN’s FARA filing, while others question whether CGTN is following all of FARA’s rules, even after filing:

For the most part CGTN America functioned normally, but on China it was closely controlled. They pulverized footage of a Xi Jinping trip to Greece in which his hair got messed up. They crop out images of Taiwan’s flag. They broadcast forced confessions. (XI’s bad hair ??) pic.twitter.com/9vBcxPJS5R

In morning/evening video calls CGTN America head Ma Jing talks to editors in Beijing, gets coverage guidance. Forced confessions are touted as “exclusives.” A few Chinese nationals do reports for Beijing that track things like coverage time for each subject.

Some stood up for Ma Jing. CGTN America employees (many experienced journalists) push back against blatant propaganda. Ma Jing gave some flexibility. For instance they packaged this reel downplaying re-education camps in Xinjiang with int’l criticism. https://t.co/IZq08pAJf7

A version ran with their context. But the Beijing-produced clip also ran on its own. Ultimately it’s impossible to argue CGTN is not a voice of Beijing. Even Xi Jinping called CGTN a publicity outlet for the party and country. DoJ lays out the case here: https://t.co/mBdjwo5KEa

Why would Ma Jing lie under penalty of perjury and claim editorial independence? It’s important. As DC does more to examine China influence, what’s an official channel of influence and what’s unofficial is a critical distinction. Yet here is an obvious attempt to obfuscate that.