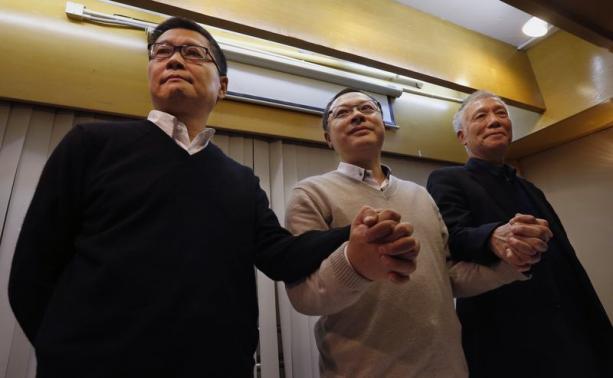 The nine pro-democracy campaigners who stood trial late last year for their roles in organizing the 2014 “Occupy Central”/Umbrella Movement protests have each been convicted of at least one public nuisance-related charge, a development that has renewed alarm over the future of political freedom in Hong Kong. Three student protest leaders–Joshua Wong, Nathan Law, and Alex Chow–were given six to eight month prison sentences in 2017 for their involvement in the movement. Their sentences were overturned in early 2018 after pro-democracy lawmakers and international observers criticized their jailing. At The Guardian, Lily Kuo reports on the charges and the renewed outcry they have prompted:

Protest leaders including the sociology professor Chan Kin-man, 60, the law professor Benny Tai, 54, and the Baptist minister the Rev Chu Yiu-ming, 75, were among those found guilty on rarely used colonial-era public nuisance charges for their roles in the 2014 protests calling for free elections, the largest civil disobedience movement in the city’s history.

The nine defendants have had their bail extended and now await sentencing, which is expected to be come on April 24. For a full list of the charges and verdicts against each of the campaigners and student activists, see coverage from Hong Kong Free Press. See also CDT’s translation of Chan Kin-man’s farewell speech, delivered to a packed hall at the Chinese University of Hong Kong just before the trial began.

NPR’s Rob Schmitz relays statements from the defendants and from the ruling judge:

Speaking in court Tuesday, Chu said, according to the Free Press, “In the Umbrella Movement, I am just a bell toller… In so doing, I hope that consciences may wake up, and together we work to save the day.”

The three main activists founded the Umbrella Movement and planned protests with the goal of flooding roads in a key government district with so many people that Chinese-backed authorities would not have any choice but to pay attention to their demands. They also saw the large public support for their demonstrations as proof that many of Hong Kong’s residents either tolerated or approved of their actions.

[…] In their defense, the activists said they were using the protests as a last resort, in the tradition of using civil disobedience to inspire change. The judge noted that through legal precedents, the concept of civil disobedience is “recognized in Hong Kong.” [Source]

The Hong Kong Free Press’ Holmes Chan reports further on the defendants’ statements before the court on Tuesday:

Barrister Gerard McCoy – representing the “Occupy trio” of Benny Tai, Chan Kin-man and Chu Yiu-ming – made an impassioned plea in court, saying that the three men’s motives “can only be described as altruistic and selfless.”

“Greed, lust or anger – this is none of those situations,” McCoy said. “These are necessarily exceptional cases with exceptional motivations.”

The three activists paid the “criminal law price for intellectual and principled beliefs,” he added.

[…] Chu also spoke during his own mitigation process, delivering an emotional speech from the dock that at times resembled a sermon. Drawing frequently from scripture, Chu spoke at length about his childhood, faith, illness and activism. [Source]

Also at the HKFP, Kong Tsung-gan describes his newly released book “As Long As There Is Resistance, There Is Hope,” an optimistic assessment of the future of Hong Kong’s pro-democracy movement. HKFP has made the volume exclusively available for a minimum donation to its 2019 #PressForFreedom funding drive.

As long as there is resistance, there is hope is the follow-up to Umbrella, picking up where that story left off, and the essays were motivated by a similar impulse. As I wrote each, I thought, “It is important to document this. I want this to stand as a signpost of what’s happening in Hong Kong not just for today but for a long time to come.”

The book is meant both to counter the falsifications of the regime and as a message to the rest of the world: do not say later that you did not know. In late 2018, when I stepped back and looked at the essays as a collection, I saw they acted as a chronicle of Hong Kong since the Umbrella Movement.

The freedom struggle certainly didn’t end with the Umbrella Movement; it goes on. This is an important story to tell. […] [Source]

At the Lowy Interpreter, Graeme Smith noted ahead of the verdict that the court’s decision would indicate just how stark the contradiction between Hong Kong and Chinese identity has become. Smith and Louisa Lim interviewed both Chan Kin-man and Nathan Law in their most recent Little Red Podcast.

In 2014, Hong Kong’s umbrella movement saw 1.2 million people occupy the city’s main roads, calling for greater democratic reform. It became known as the Umbrella Movement when marchers used brollies to protect themselves from pepper spray and tear gas. Despite the protests being absurdly well-mannered – sharing food and medicine, setting up a recycling system and even commissioning art ­– some of the movement’s leaders face court charges that include “inciting people to incite others to cause public nuisance”.

[…]Perhaps because of China’s efforts to strengthen national education and mandate respect for China’s national symbols, feelings of national identity are not moving in a direction that will please Xi Jinping. A survey of Hong Kongers reveals love for Cantonese and Victoria Harbour by night, paired with coolness to Mandarin and the People’s Liberation Army. Less than four per cent of young people identify as “Chinese” or “broadly Chinese”, down from over 30% in 1997. Many see Hong Kong and Chinese identity as contradictory.

Tuesday’s verdict, passed on a group of non-violent protestors, will send a signal about how serious that contradiction has become. [Source]