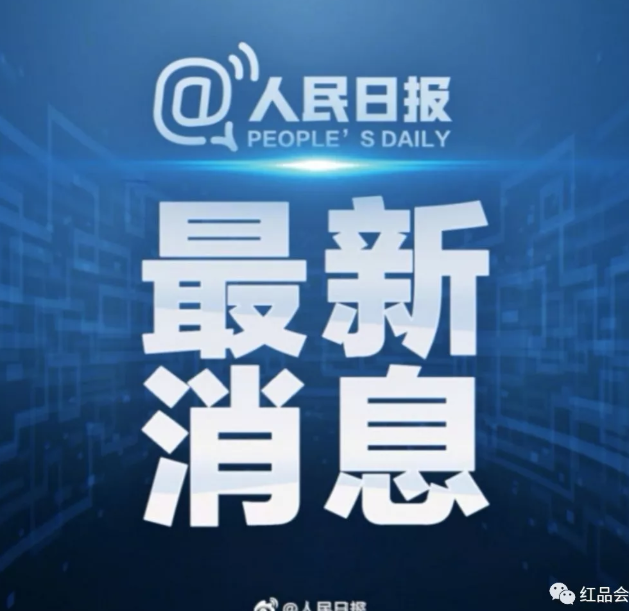 Amid an escalating trade war between the U.S. and China, nationalistic sentiment has been proliferating on Weibo and other Chinese social media, carefully encouraged by state media. On May 18, the state-run People’s Daily shared the following news brief on Weibo about a recent call between Foreign Minister Wang Yi and Secretary of State Mike Pompeo: 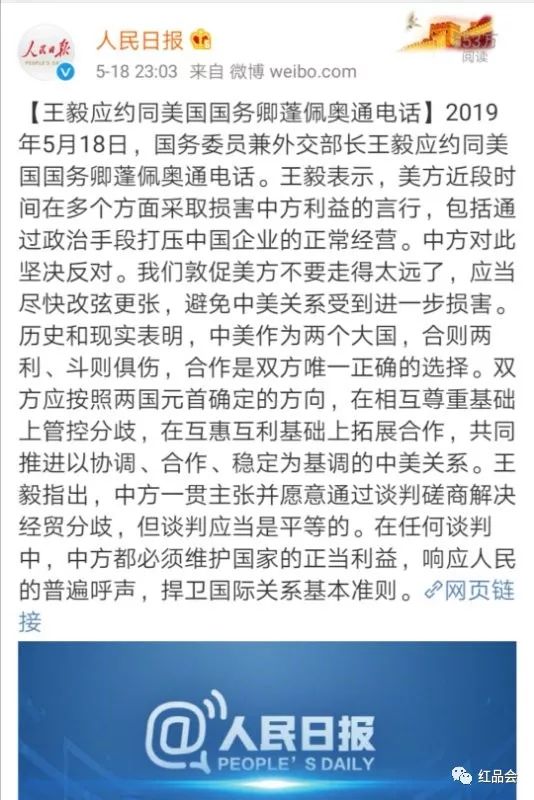 On May 18, 2019, State Councilor and Foreign Minister Wang Yi made a phone call to U.S. Secretary of State Pompeo. Wang Yi stated that the U.S. has, in recent times, said and done things that are harming China’s interests, including suppressing the normal operation of Chinese enterprises through political means. China is firmly opposed to this. We warned the U.S. not to go too far, that they should change course as soon as possible to avoid further damage to Sino-U.S. relations. History and reality show that, with China and the U.S. both being great powers, they win when they work together and lose when they fight. Cooperation is the only choice for both. The two sides should, in accordance with the direction set by the heads of state, manage differences on the basis of mutual respect, expand cooperation on the basis of mutual benefit, and jointly promote Sino-U.S. relations based on coordination and stability. Wang Yi pointed out that China has always advocated and is willing to resolve economic and trade differences through negotiation, but the negotiations should be based on equality. In any negotiation, China must safeguard the legitimate interests of the country, respond to the ordinary voices of the people, and defend the basic norms of international relations. [Chinese]

In a WeChat summary of reactions to the People’s Daily post, user @HongPinHui (@红品会) noted many netizens’ support for the foreign minister’s castigation of Secretary Pompeo, as reported by state media. Most responses in the featured comments section were in line with user @YunZhong (@芸仲), who said, “Resolutely defend China’s rights and interests,” or user @CangHaiYouYiLi (@苍海又一栗) observation that “the United States is lifting a rock to strike its own foot.”

Others netizens, however, found humor in the fact that in the People’s Daily summary, nothing was said of Secretary of State Pompeo’s reply. CDT editors selected and translated the following comments from @HongPinHui’s WeChat summary of the online pile-on: 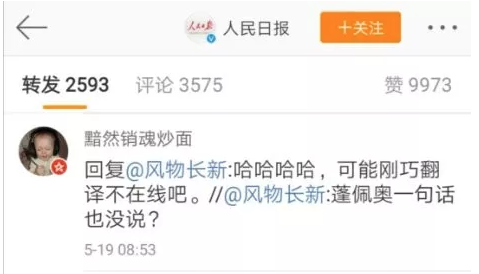 ???//@二月农夫2337: Minister Wang hung up after he finished talking, not even giving Pompeo a chance to speak.

U.S. Secretary of State: “I couldn’t even manage to say one word properly…..”

Is Minister Wang sure that the call went through? //@tinyfool: Maybe Minister Wang used his “red phone”? The U.S. doesn’t have one of those, so they could only listen but not talk back. When Minister Wang finished speaking, he hung up//@茧果:?//

@HongPinHui’s post provides many more similar netizen comments, and examples of others laughing in delight at the jocular replies to the People’s Daily post.