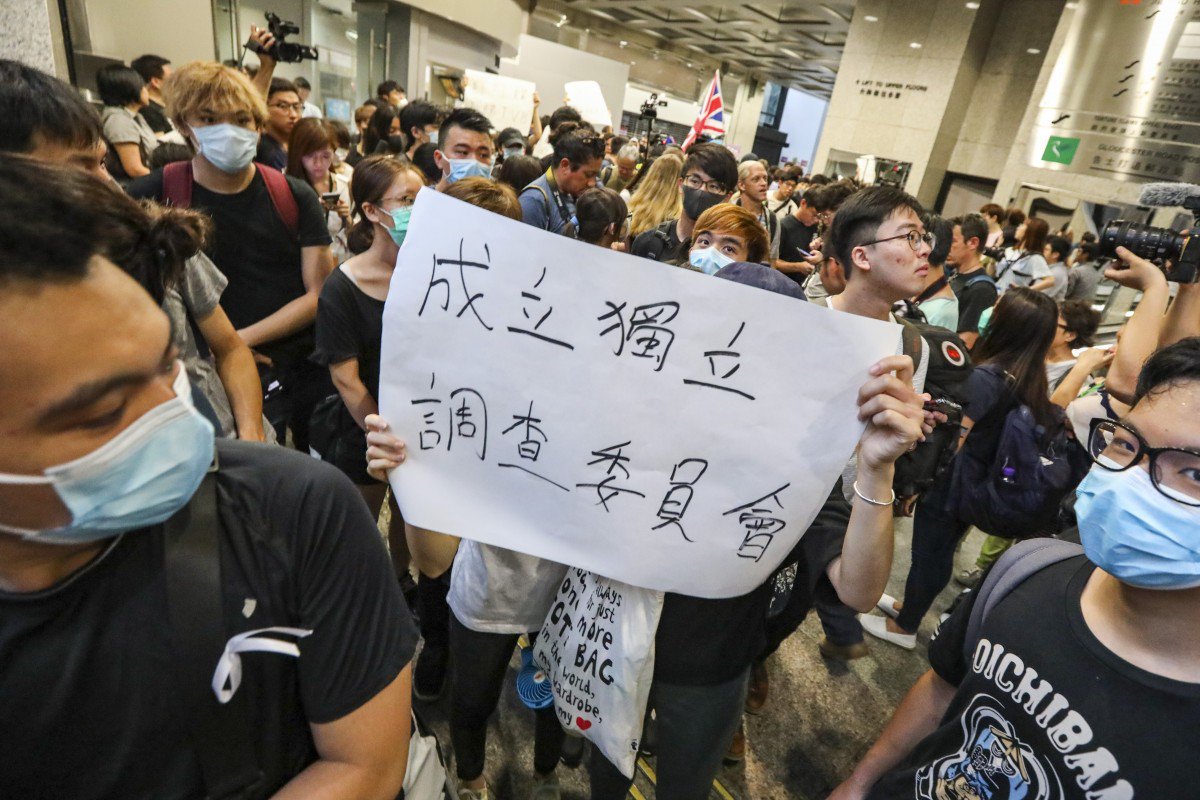 Following three weeks of unprecedented protests in Hong Kong against a planned, but now suspended, extradition law, protesters are turning their focus to the upcoming G20 meeting in Osaka, Japan. Last week, after up to two million people gathered in protest, Beijing stood behind beleaguered Hong Kong Chief Executive Carrie Lam, who has become a target of protesters for her efforts to push the law through and her response to public opposition. Lam has since kept a low-profile, cancelling a planned cabinet meeting this week. From Jeffie Lam, Gary Cheung, and Alvin Lum of the South China Morning Post:

Hong Kong’s embattled government is lying low again this week to avoid rocking the boat in the face of continuing opposition to the now-suspended extradition bill, with the city’s leader cancelling Tuesday’s weekly cabinet meeting.

No explanation was given on Monday for the cancellation, while young protesters barged into government buildings again, attempting to disrupt public services and pile pressure on the administration to completely withdraw the unpopular bill.

[…] Chief Executive Carrie Lam Cheng Yuet-ngor was nowhere to be seen again, remaining silent amid snowballing demands and advice that she drop plans to prosecute the arrested protesters and order an independent inquiry into the use of force by police during the violent June 12 clashes outside the legislature. [Source]

The Chinese government has since declared that they would not allow anyone to discuss Hong Kong at the upcoming G20 summit. Ben Westcott and Yong Xiong report for CNN:

“We will not allow Hong Kong issues to be discussed at the G20 summit,” Zhang said. “Hong Kong affairs are Chinese domestic affairs, any foreign force has no right to interfere in this.” [Source]

Protesters responded by gathering at consulates in Hong Kong Wednesday in a bid for foreign government support. Time reports:

Several hundred protesters gathered in the heart of the former British colony’s business district, wearing t-shirts reading “Liberate Hong Kong.” They then marched on the consulates of G20 nations, including those of the U.S., U.K., Japan and France, and handed over letters asking for the plight of Hong Kong to be raised at the G20 summit in Osaka at the weekend.

In the evening, thousands gathered for a rally outside the City Hall, chanting “Free Hong Kong! Democracy now!” and carrying placards that read “Give me back my freedom.” The crowds stretched to the towering International Finance Centre, almost a kilometer away, and spilled over into Lung Wo Road, blocking westbound traffic during the evening rush hour on one of Hong Kong’s main waterfront thoroughfares.

Organizers of the evening demonstration, the Civil Human Rights Front (CHRF), said it was held so that the people of Hong Kong could “sincerely urge” G20 leaders, “including Xi Jinping,” to consider the enclave’s desire for genuine self-rule. [Source]

At the U.S. Consulate, protesters called on President Trump to raise the issue when he meets with Xi Jinping in Osaka. Keith Bradsher, Daniel Victor, and Mike Ives report for The New York Times:

The demonstrators hope to draw to Hong Kong the attention of the leaders of industrialized and emerging nations and the European Union who will soon arrive in Osaka for the Group of 20 meeting. They say that world events have given them extra leverage in forcing Mrs. Lam and Beijing’s leaders to agree to suspend the law.

“Without the trade war chaos and the G-20 summit, would Carrie Lam have announced the suspension?” said Joshua Wong, a prominent youth activist.

[…] The protesters’ first stop in what they described as a marathon march was the American consulate. There, Lawrence Wong, a 46-year-old filmmaker, handed to an American consulate spokesman a letter addressed to President Trump. The letter asked Mr. Trump to raise Hong Kong’s issues at the Group of 20 meeting with Xi Jinping, China’s top leader.

[…] During his visit, Xi is expected to meet with United States President Donald Trump for talks aimed at restarting trade deal negotiations between the two countries.

Zhang’s comments that China would not discuss Hong Kong follow remarks by US Secretary of State Mike Pompeo on June 16 indicating that Trump may raise the mass demonstrations with Xi during their meeting.[Source]

Wednesday’s protests, and some responses to them, were recorded on Twitter:

❝We will not issue any further export licenses for crowd control equipment to Hong Kong unless we are satisfied that concerns raised on human rights & fundamental freedoms have been thoroughly addressed.❞@Jeremy_Hunt urges independent investigation into recent violent scenes pic.twitter.com/FNxMU9Mw6e

#HongKong's #NoToChinaExtradition protest organisers read out a statement in multiple language at a rally tonight ahead of Friday's #G20 meeting.https://t.co/mCrG5LR2Be pic.twitter.com/hmxsNYoTnw

“If you believe in values like democracy, freedom, human rights and the rule of law like we do, please, we urge all of you to voice out during the #G20 summit and defend our rights together with #HongKong people,” the statement read.

Such a fascinating (and somehow miraculous) fusion of internet and traditional paper media. This full page ad on NYT is part of a campaign initiated by netizens in Hong Kong, HKD$6.7M (USD$0.85M) was crowd-funded within 9 hours. More to come in other major newspapers. pic.twitter.com/TSpnSNGEpl

Protesters are out and about again in Hong Kong. Not to protest, but to apologise. #extraditionbill pic.twitter.com/KGqFpKOzy3