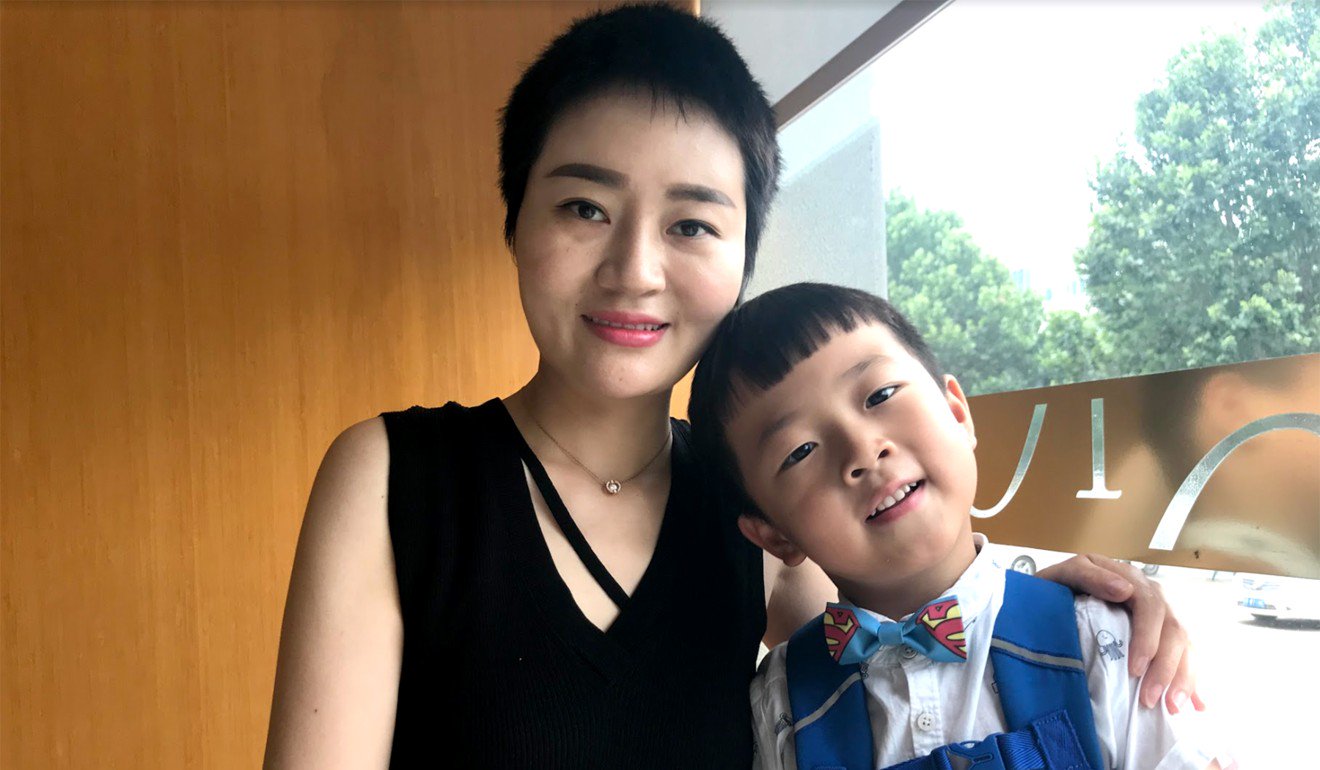 Li Wenzu, the wife of jailed human rights lawyer Wang Quanzhang, has described her husband as a “totally changed man” after she was allowed to see him for the first time since he was detained during the 709 crackdown nearly four years ago. Wang was held incommunicado without access to his family or a lawyer until his trial in Tianjin this January, when he was sentenced to four and a half years in prison for subversion of state power. Independent reporting on Wang’s sentencing was censored. Wang was transferred from the detention facility in Tianjin to prison in Linyi this May. Mimi Lau at South China Morning Post reports:

Li Wenzu, who was finally allowed into the prison’s reception area at 2pm, walked out an hour later in tears, although their six-year-old son Wang Guangwei rejoiced in the fact that he had finally seen his father after a four-year separation.

“He is a totally changed man … he was so agitated and anxious that I couldn’t even talk to him just then,” Li said.

[…] It was only on Thursday morning that Li heard from the Shandong provincial authorities over the telephone that she would be allowed a 30-minute visit at Linyi city’s prison.

She arrived at the prison on Friday with her husband’s sister Wang Quanxiu on a drizzly afternoon. There was a heavy presence of unidentified personnel wearing plain clothes outside the building, a group of whom roughed up a journalist who was at the scene.

“When I first laid eyes on [him], he turned his head away for a second and looked very dull. My first words to him were: ‘Hubby, long time no see’,” Li said. [Source]

Prior to this visit, authorities have repeatedly denied her requests to visit Wang in jail. In the four years since his detention, Li has fought tirelessly for her husband’s release. The Guardian recounts her travails:

She was placed under de facto house arrest the day before Wang’s 26 December trial to prevent her from attending.

Earlier that month, before Wang’s court date was announced, Li and three supporters shaved their heads and tried to submit a petition to a Beijing court, protesting against his detention.

In April last year, she attempted to march 60 miles to the Tianjin detention centre where Wang was previously held.

This week, a video was posted on Twitter showing Li shouting over the prison wall asking whether Wang Quanzhang was alive.

[…] “I’ve never really known if he was alive all these years, and finally there was a clear message I can meet him,” Li tweeted Thursday. [Source] 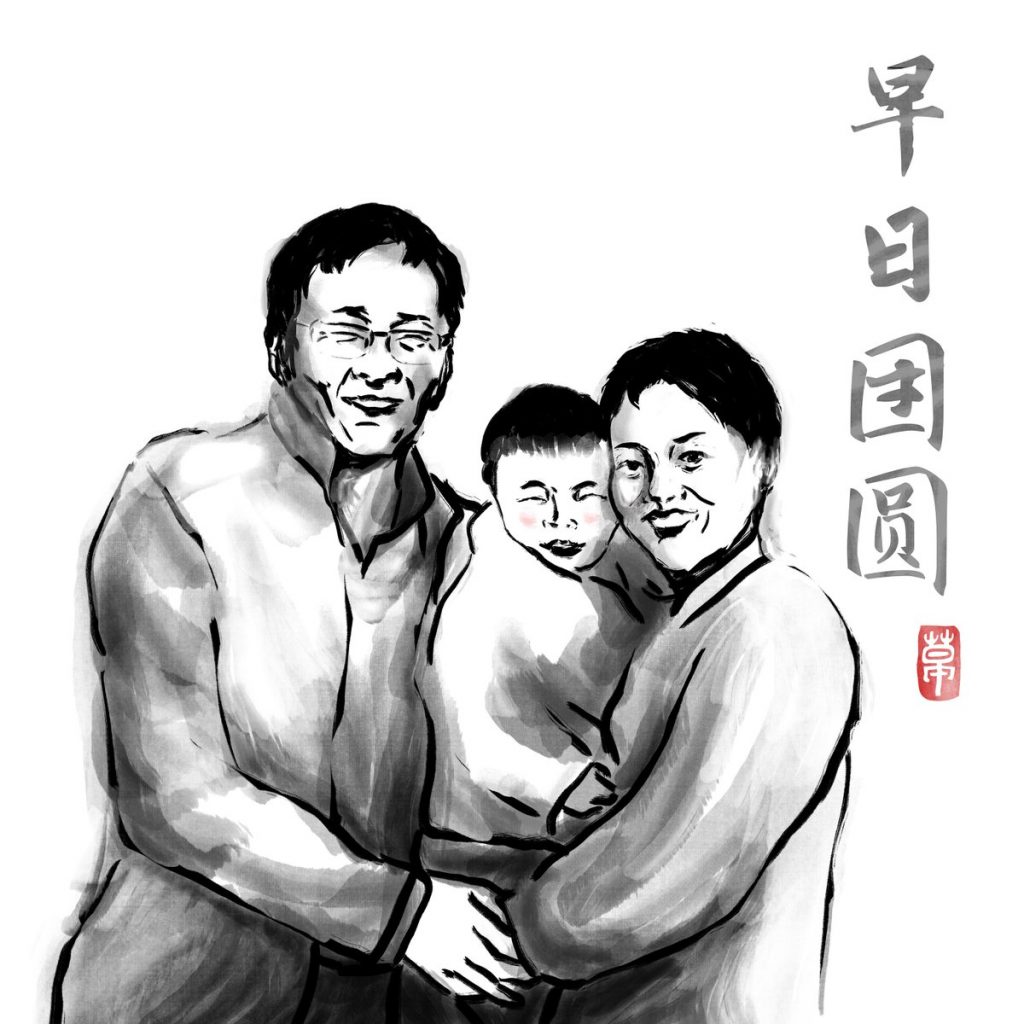 The following is a piece written by Li Wenzu describing her visit to Linyi prison, translated by David Cowhig:

I Finally Got to See My Husband Wang Quanzhang

The police led me, along with our son Quanquan and my sister-in-law Wang Quanxiu, into the conference room.

I stared at the man seated behind the glass wall and was able to recognize him as Wang Quanzhang. Excited, I smiled and waved but he only looked at me out of the corner of his eye without any expression and turned his head away from me. I started to get anxious but there as no time for that so I hurriedly sat down and picked up the telephone. Quanzhang, still expressionless, put his head down and dialed the phone.

I struggled to hold back the feelings flooding through me. Looking him in the face, I laughed, “Husband, look time no see…

Quanzhang’s eyes didn’t seem to focus. He didn’t look me in the eye. He stared with an empty gaze. I couldn’t tell what he was looking at. He slowly replied, “Long time no see.”
I quickly put our child in front of me, saying, “Quanquan, talk to Daddy.” When Quanzhang saw our son, the corners of his lips budged a little. That must have been a smile.

Quanquan excitedly called out “Daddy!” and asked, “Daddy have you been getting enough to eat?” Quanzhang replied slowly, “I am eating well. I eat fried dishes, steamed buns, steamed stuff buns, and I get supplemental meals too. I get everything I need…”

I picked up our son and my sister-in-law Wang Quanxiu took the phone and asked, “What do they give you for your supplemental meals?”

Quanzhang listened to Quanxiu’s question, looked me in the eye and then looked to one side. His expression again became wooden. From his mouth emerged a mumbled “What do they give for me for supplemental meals…”

Quanzhang started to scratch his head as if he were lost in deep, painful thought. He shook his bald head back and forth.

Suddenly, Quanzhang got anxious. His voice climbed an octave as he said, “I’m fine! Jail is very good for me! It’s not at all the way you think it is!!”

Quanzhang got even more agitated. He looked away from my line of sight, lowered his head and chattered away, “I’m fine! I’m fine! Jail is very good for me. I have gotten fat. My high blood pressure is better now. I don’t even need to take medicine! Now I just take a calcium tablet. I take one every day. I have good living accomodations too…”

I started to cry, seeing Quanzhang’s thin face. He is 5’10”. Before he weighed 200 pounds. Was he really fat now? He was fair skinned before but now not only has his entire face darkened but the skin on his hands is dark too. Before he had two perfectly aligned front teeth. Now, to my surprise, I saw a wide chink between them.

I couldn’t stop crying. I just cried and cried. Quanquan sitting on my lap took tissue paper from my hands and wiped my tears. Quanzhang raised his head and looked me in the eye. His expression was still dull and wooden. He sat there and watched me cry as if I were a stranger and not the wife whom he hadn’t seen for four years.

My eyes blurred with tears, I looked at Quanzhang and now Quanzhang looked away again. I am his wife. Why doesn’t he look at me?

Quanzhang seemed to calm down a bit. He picked up a paper in front of him and said, “There is something I have to explain to you. I was afraid that I wouldn’t remember it so I wrote it down on paper.”

I listened intently to hear what he was about to tell me. Quanzhang began to speak rapidly, “I am worried about you… You shouldn’t be doing this. I think that it was becase Bian Xiaohui asked to see her husband in prison that she was detained. I am worried about you. Don’t do anything…”

(The case of Bian Xiaohui occurred before Quanzhang went to prison. Bian Xiaohui is a university student whose father was deprived of the right to receive visitors in prison because the father practiced Falung Gong. Bian insisted that a lawyer meet with his father and demonstrated in the street with a sign to protest. Bian was arrested and sentenced to four years in prison.)

Quanzhang kept saying over and over that he was worried about me, keeping his eye on the paper the whole time. Then he stopped as if he didn’t know what more to say and was looked for it on the piece of paper.

I quickly reassured him, “I am fine, Quanzhang. I am fine.”

Quanzhang again started to get agitated. He stared at the paper. He looked very troubled. His voice got higher again. “Don’t do this. I am worried about you. Take care of Quanquan, make sure he does well in school. This could have a bad effect on Quanquan!”

I comforted him, saying “Quanquan is fine, don’t worry about him!”
Quanzhang bowed his head, not looking at me, saying in a low voice, “This is bad for Quanquan. You don’t see it! You don’t know!”

I was astonished at Quanzhang’s reaction. He picked up the paper and turned it over and over in his hands. He didn’t look at me again. I saw that the paper was densely packed with his handwriting. His eyes didn’t see me. He looked down at nothing in particular. No matter what I said, he wouldn’t accept it.

Quanquan, sitting next to me, couldn’t take it anymore. He grabbed the telephone to soothe his father, “Daddy, I am fine. I am really fine!” Quanzhang seemed not to have heard what Quanquan said. Out of his mouth still came that mumbling, “You can’t see it! You don’t know….”

Again I couldn’t help myself. I cried again.

The telephone beeped. Quanzhang said woodenly, “We have one more minute.”

Quanquan yelled, “Daddy, I love you!”. Quanzhang seemed robot-like as he responded woodenly in an even tone, “I love you too.”

The connection was cut off. Quanzhang got up. We got up too. The child put in hand on the glass. Quanzhang, with a wooden expression on his face, put his hand on the glass as well. Then he turned and left. I watched my eyes full of tears as his back receded some ten or so meters away. My tears flowed again. Four years. Astonishingly, he resembled nothing more than a well-programmed but rather dull wooden man. He didn’t even look back at his own wife and child.