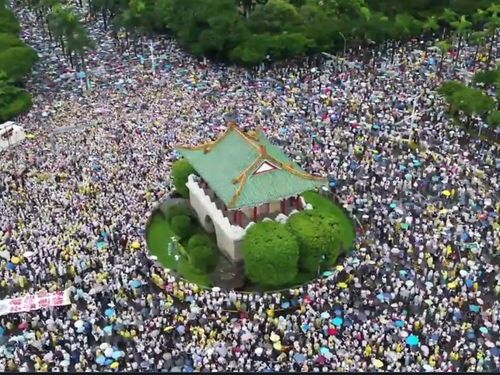 Recent protests in Hong Kong against proposed extradition rules that threatened further erosion of the territory’s autonomy have attracted considerable support from Taiwan, including public displays of solidarity and a cross-party legislative resolution. On Sunday, tens of thousands gathered in Taipei to oppose Chinese interference in their own country, particularly through local media outlets, ahead of elections later this year. Concern over this influence had previously led to plans for a ban on Chinese streaming services’ Taiwanese operations, and to university protests against pro-Chinese TV news shown on public screens around campuses. From Central News Agency’s Stacy Hsu:

The main organizers, YouTube celebrity Holger Chen (陳之漢) and New Power Party (NPP) Legislator Huang Kuo-chang (黃國昌), said the protest was not just against the “red media” in Taiwan, but also in opposition to the Chinese Communist Party’s (CCP) authoritarian rule in China.

[… “Red media outlets] accept subsidies from the CCP with one hand and use the other to produce fake news to damage Taiwan’s democracy,” Huang said. “They are our shared enemies and require our collective resistance.”

He apparently was referring to a report in the Chinese-language newspaper Apple Daily in April that said Want Want China Holdings Ltd in China, a subsidiary of the Taiwan-based Want Want Holdings Ltd., had received up to 477 million Chinese yuan (US$71 million) in subsidies from the Chinese government between 2017 and 2018.

[…] The protesters called on the National Communications Commission (NCC) — the government agency responsible for regulating the telecommunication and broadcasting industries — to rigorously enforce the existing laws to discipline any media outlets that display questionable conduct.

They also urged lawmakers to expedite legislation to prevent the CCP from using media outlets to divide and spread disinformation in Taiwan. [Source]

Even though the rally used general slogans such as “oppose red media” and “protect Taiwan’s democracy” as a call to action, it was mostly targeting Want Want China Times Media Group, which owns China Times and CTi News in Taiwan. The group is led by pro-Beijing Taiwanese businessman Tsai Eng-meng (蔡衍明), who has been accused of liaising with the Chinese government.

In addition, CTi News has been disproportionally disseminating news, some of which viewed as inaccurate and biased toward Kuomintang Kaohsiung mayor and presidential hopeful Han Kuo-yu (韓國瑜), according to regular statistics from the NCC. In a political talk show broadcast by CTi News earlier this month, the presenter, Huang Zhixian, openly promoted the “one country, two systems” framework and criticized the Hong Kong protests against the proposed extradition bill.

[…] Through a Facebook post published on Saturday afternoon, President Tsai Ing-wen (蔡英文) said the rally shows that people are concerned about the Chinese influence in Taiwanese media. She believes that Taiwanese society will be more vigilant about the matter. [Source]

Tsai Eng-meng’s media acquisitions were described as “an iconic example” of “intensified [Chinese] incursions into Taiwan’s media landscape” in a translated excerpt from “Red Infiltration: The Reality of China’s Global Media Expansion” by Chinese economist He Qinglian, posted this week by Taiwan’s Ketagalan Media.

Want Want is a brand famous for making snacks, and the conglomerate has immense market interests in China. The company is known for being heavily pro-China and pro-CCP. The company’s CEO, Tsai Eng-meng, used personal investments of up to US $661.3 million to buy out the China Times Media Holdings Group’s flagship China Times (中國時報), Business Times (工商時報), Times Weekly (時報周刊) newspapers and CTiTV (中天電視), as well as China Broadcasting Corporation (中國廣播公視), among other media outlets and publications. The change in ownership of China Times newspaper in nearly 60 years was the most significant change in Taiwan’s media history.

[…] On December 5th, 2008, merely a month after buying China Time’s Holdings Group, Tsai Eng-meng met Wang Yi, the director of China’s Taiwan Affairs Office (TAO). Tsai said the purchase was intended to “exploit the power of mass media to promote closer cross-straits relations.” Wang replied, “let us know if you need any help, the TAO will fully support you.”

[…] Since then, China Times, as one of the leading media groups in all of Taiwan, had evolved into a very peculiar reporting style: even though it would sometimes criticize Taiwan’s government, it mostly became a massive propaganda cheerleader for China. Professor Yen Hai-yuen from the social studies department in Academia Sinica notes that while China Times joined in on the criticism of Ma during his first six months in office when public opinion support for him started to dip, this is only because other Taiwanese media outlets were also making criticisms and it was impossible for them to try to stick out like a sore thumb with blatant, fake numbers of support. However, the China Times newspaper, CTiTV, Want Want Times, and other media, under the control of Tsai’s China Times Holdings Group, were “acting with all their might as a propaganda mouthpiece to bolster China,” posing a greater threat to Taiwan. [Source]

Thread – How entrenched is China's infiltration into #Taiwan's local media? One perfect example is the massive acquisition of radio stations broadcasting in Taiwanese in southern #Taiwan.

These stations are traditionally tailored towards farmers, service industry people and factory workers in southern Taiwan, and most of the listeners are over the age of 60, according to my interview with Dr. Wang Hong-zen.

As a regular listener of these radio stations, Dr. Wang started picking up news stories about Taiwanese businessmen setting up booths at trade shows across #China and how successful their businesses have become since they joined these trade shows.

Additionally, hosts from these radio stations started to openly share their “exchange programs” to different Chinese cities, while many of these stations’ owners are invited to attend the “Cross-Strait Media Forum” in #China.

On May 31, one of the most popular hosts from these stations openly endorsed Han Kuo-yu to run for president, and his reasoning is “the reason why Kaohsiung’s municipal affairs remain stuck was that the central government couldn’t help Mayor Han kick off his programs.”

The endorsement came one day before Han Kuo-yu’s first major rally for the 2020 race in Taipei. These Taiwanese radio stations help form a virtual community for all these older Taiwanese people in southern Taiwan, who almost exclusively use Taiwanese in everyday lives.

While hosts normally don’t talk about politics on the shows, they would start expressing some opinions when it’s getting close to the election, and listeners normally internalize whatever they hear on air, making them the prime target for China’s infiltration campaign.

You may wonder why is this particular case so important to prove the effectiveness of #China‘s infiltration campaign in Taiwan. By overcoming the linguistic barrier, China has gradually turned a group of Taiwanese that may traditionally be more pro-DPP into more pro-#China.

This is something that the pro-China KMT has been struggling to accomplish over the last 2 decades, but #China has quietly accomplished a difficult task by acquiring many of these radio stations that might be considered outdated by mainstream society in #Taiwan.

These listeners, who form the backbone of these radio stations, are now some of the most loyal supporter of Han Kuo-Ty’s bid for the 2020 presidential election, and such change proves why China’s infiltration campaign in Taiwan can seriously impact the upcoming election outcome.

Others on Twitter have posted further about the protests and the impact, there and elsewhere, of recent events in Hong Kong:

Yesterday I went to church in an Atayal aboriginal village way up in the mountains, one of the remotest places I’ve been in Taiwan. The program included an essay, “HK Today, Taiwan Tomorrow,” telling the congregation to ask God for the power to protect TW’s democratic freedoms pic.twitter.com/aKA2kajiKz

The 老母 protest theme has made it to Taiwan ?
("Xi the Pooh, unite your mom!")