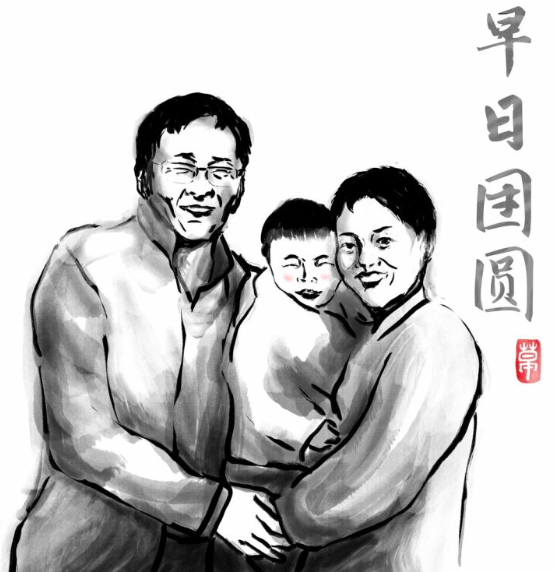 The wife of jailed human rights lawyer Wang Quanzhang visited her husband for the second time at Shangdong’s Linyi Prison this week. Li Wenzu described Wang as a “totally changed man” after seeing him for the first time back in June. Wang is serving four and a half years in prison, after being sentenced this January on “subversion of state power.” Li had hoped that her husband’s condition would improve by her second visit but he remained disoriented and agitated. Radio Free Asia’s Gao Feng reports that Li has applied for Wang to be released on medical parole.

Li said Wang had always been known for his clarity of thought and rigorous logic, but he seemed dazed and anxious now, which made her worry that he had been brainwashed.

She said she had submitted an application for Wang’s release on medical parole immediately after the second visit.

“The prison staff accepted my application and told me to go home and wait for news,” she said.

“Wang Quanzhang hasn’t shown any improvement or signs of recovery, so I am extremely worried about his physical and mental state, and feel that he needs to get professional treatment right away,” Li said. “I don’t know yet whether they will allow this.”

Debarred rights attorney Tan Yongpei, a close friend of Wang’s, said he wasn’t optimistic about Li’s chances of success, however.

“The Wang Quanzhang case is listed as a very sensitive case, so how can they release him to hospital for medical treatment?” Tan said. “It looks as if they are trying to induce mental illness in him.” [Source]

Li has continued to document her visits to Linyi Prison. CDT has translated the article describing her second visit:

Linyi Prison, what are you afraid of?

–The second meeting with Wang Quanzhang

On the afternoon of July 30, 2019, I took my son’s hand and lined up with my sister at the entrance to Linyi Prison’s visiting room. At 1:57 p.m., the long line began to move, and I was relieved. The line was more orderly this time, people did not swarm in.

The man who lined up behind me last time was behind me again, a stout man wearing a gray t-shirt and smoking cigarette. He had a very characteristic look with his chin lifted, his eyelids drooping.

On the left and right sides of the waiting hall were two large screens, on which flashed a dozen numbers arranged in numerical order. Our number was 0127, which wasn’t shown. It looked like we needed to wait for the next batch.

I found a seat with my sister-in-law, and as we were just about to sit down, I heard the announcement: “Number 0127, please go to the first window for your visit.” 0127 also popped up at the top of the screen. My sister-in-law and I immediately took Quanquan and walked quickly to the security checkpoint. Other visitors waiting around us turned their heads and looked at us in surprise. Obviously they were wondering “what kind of connection” we must have to receive this kind of “privileged treatment”! We were placed first in this batch!

We were inspected again, and even Quanquan’s shoes were repeatedly squeezed. Quanquan spotted his father sitting by the first window from afar. He desperately tugged me towards his father. He was so excited to see him that he didn’t even wait for his aunt.

Quanzhang turned around and took one look at us and turned his head back, sitting motionless as before.

After we were seated in front of Quanzhang, he picked up the phone and dialed it while looking at his chest badge. However, he dialed the wrong number and had to dial it again before connecting through.

I stared at Quanzhang’s face and found that he was much thinner than a month ago! His temples were sunken. Sister Quanxiu came over at this time, and she too found that Quanzhang had lost weight.

I hurriedly called out “hubby.” Quanzhang replied with one “hm.” I quickly placed the phone by Quanquan’s ear, and Quanquan immediately asked in a loud voice: “Dad, how have you been lately? Have you been eating well?”

At that moment, I once again noticed that his left lower tooth was sticking out prominently. This was not the case last time! The handset being held in my son’s hand was returned to mine. But before I had a chance to speak, Quanzhang started saying frantically: “You didn’t receive the letter. Go home and get your ID card to pick up the letter from the post office. I wrote two letters. Don’t have misconceptions about Linyi Prison, Linyi Prison is excellent.”

I answered and worriedly asked Quanzhang about his tooth. Quanzhang’s eyes veered away, muttering: “One came out in Tianjin and another one was extracted. This tooth…will fall out soon too.”

I experienced a sudden rush of blood to the head. He was only 43 years old. I haven’t seen him in four years and three teeth are gone?

Quanzhang didn’t seem to understand why I was so distraught. As he was talking, his thoughts became stuck and he lost concentration. He held up his forehead, lowered his head and closed his eyes, his brows locked, and he groaned: “What was I saying? What was I saying?” I didn’t dare rush him. I could only watch him, his old, dark, and thin face, waiting. This time he did not read from a piece of paper.

He finally remembered and nervously, without even looking at me, he said in a hurry: “The prison said you brought a reporter with you again this time…this is not good. It’s not good to do that. Linyi Prison is very good to me!”

I looked at him intently, hoping that he would make eye contact with me while he spoke, but he didn’t.

He lost concentration again as he spoke…

I couldn’t hold it in anymore. In my mind, I pictured lawyer Jiang Tianyong under house arrest with his swollen feet in his hometown of Xinyang. I lost control and shouted: “After you get out you are free. Why should they have to follow you?!”

Quanzhang appeared to not have heard anything and said: “Once I get out, I will live in Jinan for two months.”

I also continued in a loud voice: “I live in Beijing, Quanquan goes to school in Beijing. Why are you going to Jinan?!”

Quanzhang took one look at me and said blankly: “My hukou is in Jinan…”

Wang Quanzhang used to be a lucid lawyer with a strong sense of logic. What did he go through to become like this? I looked at him, trying hard to hold back tears. In my heart, I just wanted to cry out to him: “Li Heping’s hukou is in Kaifeng, but he is still living in Beijing with his wife and child!” But I couldn’t get the words out. I could only look at him in his confused state, feeling restless inside.

How did Linyi Prison brainwash Wang Quanzhang? I look forward to Quanzhang getting back to his old self, to be able to tell all these secrets.

Quanzhang looked at my anxious appearance and stared blankly for a long time. With his eyes veering off again, he said: “You don’t need to come see me anymore. You live far, it’s troublesome.”

I was struck dumb, and said: “We are your wife and child. We look forward to seeing you every day. There is only one chance every month…”

Quanzhang no longer looked at me. With his head lowered, he said: “I feel very pressured when you come…”

I didn’t understand what I heard, and said desperately: “I’m your wife. I’m your…”

I looked at the five police officers standing around holding cameras and wearing headsets, staring at us with a murderous look. I suddenly understood: “It’s not you who is under pressure, it is Linyi Prison that is under pressure right…”

Hearing this, Quanzhang lifted his head and took one look at me, and then lowered his head again, not saying a word.

I don’t know how I walked out of the visiting hall. This whole month I imagined seeing Quanzhang a bit more normal than last time. But, in the end, I was disappointed. My chest felt so suffocated that I couldn’t breathe. It felt like two hands were firmly choking me by my neck. I shuffled with my limp legs and went to the prison’s administrative building with my sister-in-law, Wang Qiaoling, and Liu Ermin to hand in Wang Quanzhang’s application for “release on medical parole.”

I also heard that the reporter’s mobile phone was taken away by an unidentified person while he was taking photos!

Linyi Prison, what are you afraid of?