Dr. Li Wenliang, one of the first people to sound the alarm on the novel coronavirus in Wuhan, was officially admonished by authorities for “spreading rumors” about the disease. Later his case was used by state media as a warning to other potential “rumormongers.” After his official censure, Dr. Li contracted the illness, and news of the topic was censored. While in treatment, Dr. Li spoke to foreign and domestic media, advocating that a freer flow of information is needed for a healthy society. After his February 7 death, Li became a tragic symbol of the outbreak and its cover-up by the Chinese authorities. While mourning Li, many netizens demanded freedom of speech despite censors efforts to cool the discussion.

Poet Yu Xiuhua has now contributed to the outpouring of grief for Dr. Li Wenliang. In “Mourning Li Wenliang” (悼李文亮), translated in full below, Yu speaks to Dr. Li directly, commanding him to rest and wondering aloud what the afterlife holds for him:

Now rest!
There’s no virus worse than “punishment for speech”
There’s no world uglier than one that mixes right with wrong

Now rest!
Now let me live my shameful life
And let me sing my angry dirge

If there are viruses in heaven
If you speak up again
Then where will you go?

As the nation was mourning the death of Dr. Li Wenliang, an anonymous group of Tsinghua University alumni issued a public letter to their compatriots. The open letter opposes the government’s priority of stability maintenance and the indefinite rule that Xi Jinping has made available to himself, and demands the rights promised to all in China by the PRC Constitution. The letter has been translated below:

A Letter to All Compatriots

Doctor Li Wenliang has died. The whole nation is in mourning.

He was a dedicated, compassionate ophthalmologist who was questioned by his work unit, reprimanded by the police, and publicly named a rumormonger by CCTV simply because he told a few truths in a WeChat group shared among his graduating class.

In the end, he proved with his death that he was not making rumors.

He didn’t want to be a hero, yet he was forced to become one!

Without truth, lies run rampant. Killing truth is akin to killing human beings. Eight people were silenced, resulting in all of China being shut. What a terrible price to pay!

To this end, we announce the following:

First, we resolutely oppose putting political security above all else. This is the selfish goal of a small group of people! The lives of hundreds of millions must come first!

Second, we resolutely oppose blocking of accounts and chat groups. We support the effective protection of the constitutional rights of all citizens–especially freedom of speech, whether that speech is right or wrong.

Third, we resolutely oppose the thinking and model behind stability-maintenance, and oppose hostility towards the people. Only by guaranteeing people’s livelihood and improving democracy can there be social stability and peaceful living.

Fourth, we resolutely oppose turning this disaster into a grand celebration of meritorious deeds. We must hold the officials and the system accountable, so as to avoid repeating this disaster.

Fifth, we resolutely oppose going backwards. We must adhere to Deng Xiaoping’s abolition of a system that allows leaders to stay in power indefinitely, and resume political reform in order to save the Chinese nation from its crisis!

Fellow citizens! For the life and death of hundreds of millions of Chinese, and for the survival of our nation and our country, let us utter our final roar!

A segment of Tsinghua University alumni 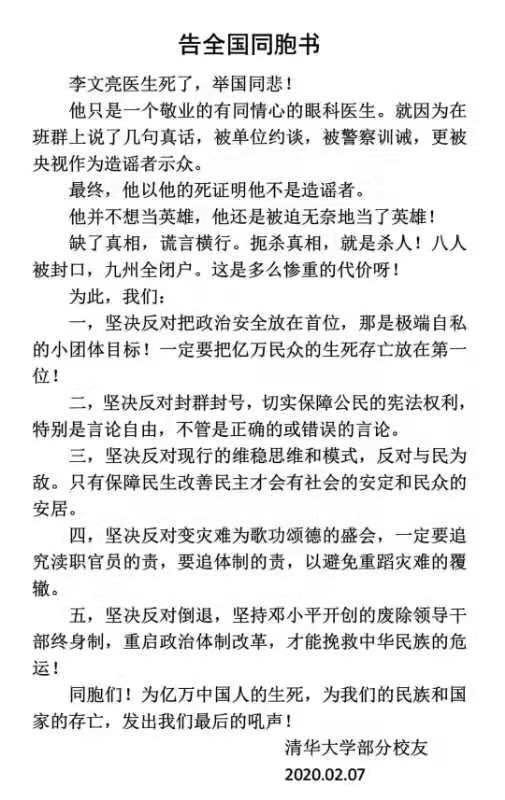 In the wake of Li’s death, a Supreme Court judge reposted an article on WeChat promoting expanded freedom of expression and democratic rights, though a note at the end adds that it does not represent his personal opinion:

This is quite something for a Supreme People’s Court judge to share:

1. More independent media & artists who will be allowed to criticize & satirize https://t.co/V4BSDpRhYl pic.twitter.com/OLkr6buU0n

2. Opening up of discussion, including the establishment of online voting for online National People’s Congress representatives pic.twitter.com/PtCheoqnlX

“We’ve been held back for a decade by saying nothing but falsehoods & not letting people speak the truth. Everyone is aware of this stifling of the truth, they feel it in their bones & are disgusted by it..