Li Wenliang was one of eight people punished by Wuhan authorities in early January for spreading rumors about the emerging coronavirus outbreak that has now been declared a “global health emergency.” Initially publicized by local officials (and state media) as a deterrent, his punishment fueled public anger over the initial response to the disease when it was later revealed the eight were medical personnel. News of Li’s death from the virus triggered a huge public response, and was followed by reports that he was still undergoing treatment–further enraging the public and establishing the whistleblower as “the face of the coronavirus crisis.” His death has now been confirmed, and authorities have issued a censorship directive (translated by CDT) to control the narrative.

Pictures of the official notice of admonition served to Li on January 3 have been circulating online, and are translated below:

Illegal behavior (time, location, participants, number of people, what problems were reflected, consequences, etc.): Publishing fictitious discourse related to the confirmation of 7 SARS cases at the Huanan fruits and seafood market in the WeChat group “Wuhan University clinical `04” on December 30, 2019.

In accordance with the law, we now warn and admonish you for the unlawful matter of publishing untrue discourse on the internet. Your behavior has severely disrupted social order. Your behavior has exceeded the scope permitted by law, and has violated the relevant provisions of the Law of the People’s Republic of China on Penalties for Administration of Public Security — it is an illegal act!

The public security bureau hopes that you will actively cooperate with our work, follow the advice of the police, and stop the illegal behavior. Can you do this?

We hope that you can calm down and earnestly reflect, and solemnly warn you: If you are stubborn, refuse to repent, and continue to carry out illegal activities, you will be punished by the law! Do you understand? 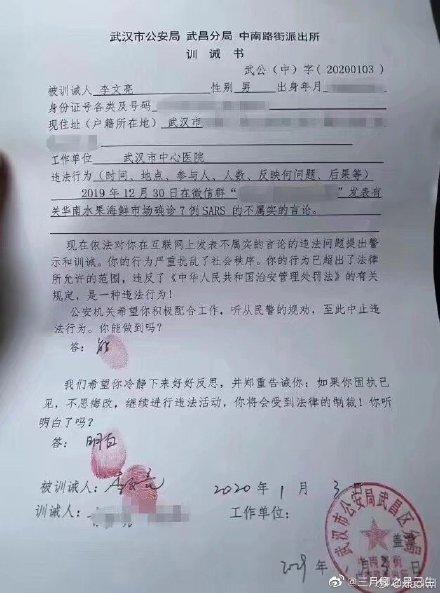 [Update: January 06, 16:29 PST] The day after Li was admonished by authorities, before his identity as a frontline health worker was revealed, China’s state broadcaster CCTV framed the incident as a public warning to all viewers and web-users. CDT has translated the relevant section of the January 2 broadcast:

On the evening of the 1st, the official Weibo of the Wuhan Public Security Bureau announced that eight individuals were investigated and punished according to the law for spreading rumors about the current Wuhan pneumonia epidemic.

According to reports, several medical facilities in our city have recently discovered and treated  a number of pneumonia cases. The municipal health committee has since issued a briefing on this.

Yet, some netizens have posted information on the internet without verification, shared false information, and created adverse social impact.

After public security organs investigated and verified the situation, eight illegal personnel have been summoned and dealt with according to the law.

At the same time, the police are reminding everyone that cyberspace is not beyond the law. Posting information on the internet should comply with laws and regulations. The police will investigate and deal with all illegal acts that fabricate and spread rumors, and disrupt social order. Acts like this will not be tolerated.

It is our hope that netizens will abide by relevant laws and regulations and refrain from creating, believing, and spreading rumors, and together build a harmonious and sunny cyberspace. [Chinese]